The Fundo Soberano de Angola (FSDEA) was established in 2012 with an initial injection of USD 5 billion from O&G proceeds, which made it (and still is) the largest SWF in all of Sub-Saharan Africa. Since then, the fund has gone through various Governance issues, with the son of the country’s President, José Filomeno “Zenú” dos Santos, acting as its Chairman. On August 15, 2020, after an eight-month trial, Zenú was sentenced to five years in jail for embezzling US$ 0.5 billion from the Central Bank. This could be a second chance for the SWF, despite the significant withdrawals faced during the past 14 months. We had the pleasure of catching up with Miguel Carneiro, former Head of Alternatives Investments at FSDEA and currently a partner at AFC & Partners. 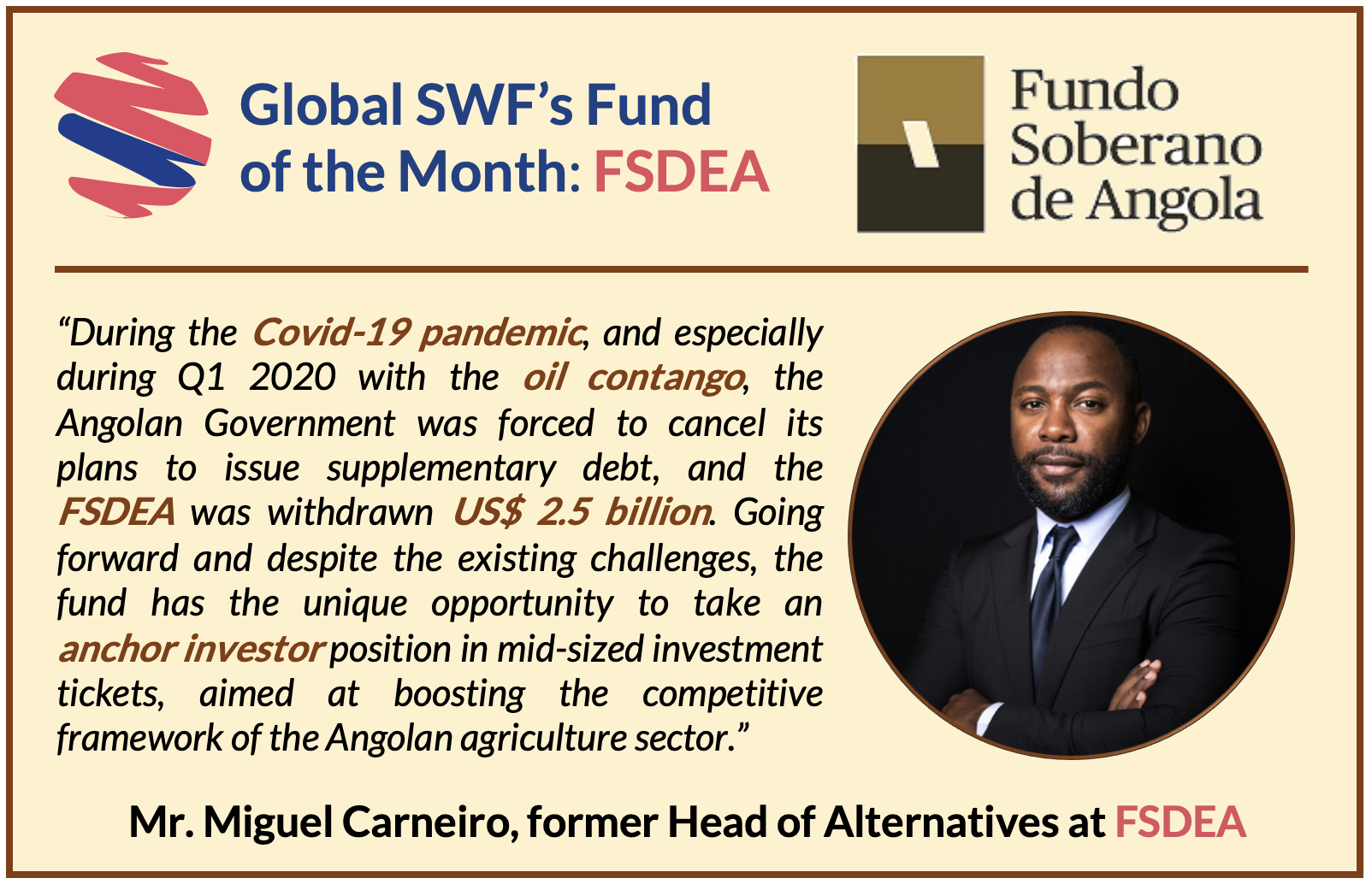 [GSWF] Could you walk us through the recent developments in Angola, and what these have meant for the FSDEA?

[MC] Since late 2017 the current Angolan economical decision makers have been trying to jumpstart an economy known to be at the complete mercy of global crude markets. Angola is going through a revolutionary development program aimed at renovating its primary infrastructures, which have been crippled by 35 years of civil war. The new investments include major renovation projects for roads, ports, airports, power production and transportation, as well as water infrastructures.

The country has contracted massive amounts of foreign debt as a result of this gigantic effort, with China as its biggest international creditor. As part of the most recent economic reforms, the Angolan Government formalized in July 2019 a decree to withdraw US$ 1 billion from the FSDEA. Five months later, the country made its latest issuance of sovereign debt for US$ 3 billion, which was oversubscribed three times attracting interest from investors in the US among others.

During the Covid-19 pandemic, and especially during Q1 2020 with the oil contango dipping oil future contracts to negative levels, the Angolan Government was forced to cancel its plans to issue supplementary debt, and the FSDEA was brought in as the main base of support amid the early shockwave. The initial US$ 1 billion withdrawal of July 2019 was followed by an additional US$ 1.5 billion in April 2020, taking the total capital call to US$ 2.5 billion in the short span of ten months.

Today, a new set of challenges and opportunities lie ahead for the Angolan SWF: the country's budget is in dire need of cash and the government needs to sustainably develop key sectors such as agriculture, which has so far been affected by low yields and high operation costs. The government has given clear signals of its aim to boost domestic agriculture production with the adoption of protectionist measures; however, the reduction of operational costs remains a key challenge.

Those initial difficulties within the upstream and midstream part of the agriculture value chain present excellent mid-sized investment opportunities for the FSDEA. The local agriculture sector critically requires low cost and efficient energy generation, feedstock production as well as storage and processing facilities. Outside of Angola, the African continent has recently observed a number of SWFs in Nigeria (NSIA), Morocco (Ithmar), and Rwanda (Agaciro) taking leading roles by promoting investments in key domestic sectors, fully aligned with the respective country’s national economic agenda.

Going forward and despite the existing challenges, the Angolan SWF has the unique opportunity to take an “anchor investor” position in mid-sized investment tickets, aimed at boosting the competitive framework of the Angolan agriculture sector. 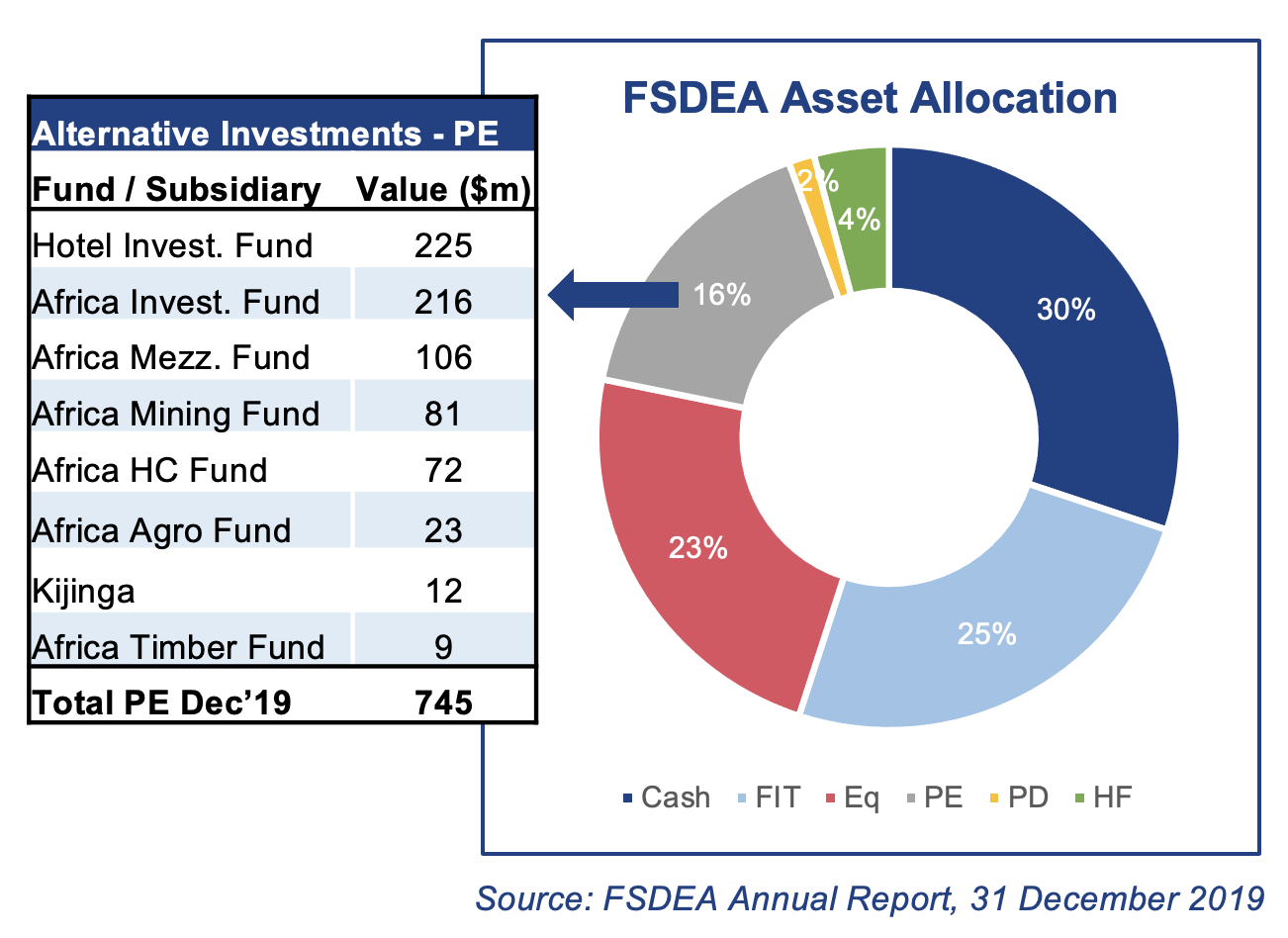