The Ireland Strategic Investment Fund (ISIF) was established in 2014 as the successor of the National Pensions Reserve Fund (NPRF), under the umbrella of the National Treasury Management Agency (NTMA). Since then, the Fund has focused on supporting the Irish economy and became one of the world’s role models of sovereign development funds, with a double bottom-line mandate: investment returns and economic impact. As part of that mandate, ISIF recently established a EUR 2 billion Pandemic Stabilization and Recovery Fund (PSRF). We had the pleasure of catching up with Mr. Eugene O’Callaghan, who is stepping down in December after ten years leading NPRF and ISIF. 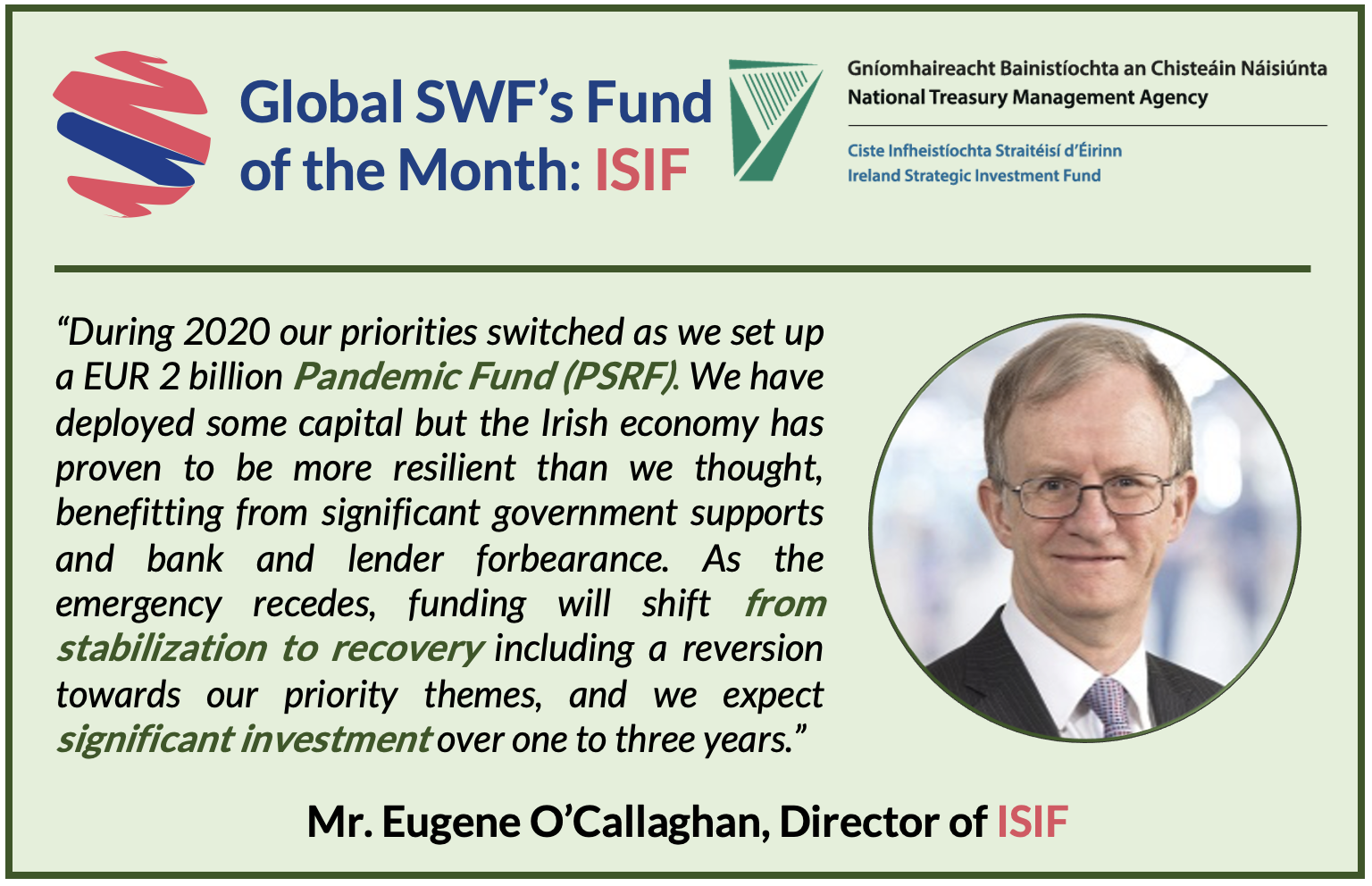 [GSWF] ISIF has been a successful story of an SDF – what can you tell us about the double bottom line?

[ISIF] The combination of a commercial activity and economic impact mandate was fairly novel at the time ISIF was set up. Initially, we used to cover a wide range of investments including RE, SMEs, private debt, etc. In early 2019, given the potential economic overheating, it was decided that we would focus on five priority themes that were strategic for the Irish economy, in what we called ISIF 2.0. This year, it was decided to put those five priorities on hold and start investing in domestic businesses, primarily medium and large enterprises, affected by the pandemic. Three materially different strategies during six years but all on the back of the overall goal of supporting the Irish economy.

[GSWF] During 2020 the priorities switched with the EUR 2 billion Pandemic Fund (PSRF) – how is it going so far?

[ISIF] Some of the capital has been deployed already. We were expecting a significant need when the PSRF was established in May but the Irish economy has proven to be more resilient than we thought, benefitting in particular from significant government supports and bank and lender forbearance. Irish businesses have also learned the lessons of 2008 and are now more conservatively structured in terms of gearing, so many businesses may be in a stronger position than may have been feared at the start of the pandemic and their requirement for external capital may be lower. As the emergency recedes, funding will shift from stabilization to recovery including a reversion towards our priority themes, and we expect significant investment over one to three years.

[GSWF] Let’s talk about Brexit – how do you see the potential trade barriers affecting the ISIF portfolio and strategy?

[ISIF] We support Irish businesses, and this includes the Food sector which would be particularly affected by a hard Brexit. Undoubtedly, there will be a negative effect for us; however, our portfolio is highly diversified and we expect it to be resilient.

[GSWF] ISIF inherited a significant global portfolio, which has not performed as well – will it be divested over time?

[ISIF] The global portfolio has always been meant to provide the necessary liquidity for the Irish portfolio. The Global Portfolio strategy has been low-risk but seeking to earn some return to compensate for negative cash rates in the Eurozone. It is intended to wind it down and deploy capital into domestic holdings over time, with the pace of the transition reflecting market conditions.

[GSWF] What is the status of the second EUR 150 million fund with CIC? Are you looking for new partnerships?

[ISIF] Our second fund with CIC is still in early days and there are some obvious geopolitical tensions that affect the technological world, so it is a bit early to say, but so far so good. Our partnership with CIC was opportunistic in nature, so it won’t necessarily be replicated. That said, we have set up a partnership with IFC for the Food sector, and others may follow.

[GSWF] Your 50 employees manage over EUR 10 billion in assets – how do you see it changing in the future?

[ISIF] NTMA is an umbrella agency that provides our investment team with the necessary Finance, IT, Legal, HR, Risk and other supports, and allows us to focus on investments. We therefore don’t foresee a significant change in headcount in the future.

[GSWF] You are stepping down in December, after ten years leading NPRF and ISIF. What summary would you provide? With the benefit of hindsight, is there anything you would have done differently?

[ISIF] There have been many iterations and changes during my time at both NPRF and ISIF. I am very satisfied with the performance and support we have provided the Irish economy and I believe we have shown that the model of a Sovereign Development Fund can work out. Like everyone in the investment world, I would have liked to pick up more winners and less losers. Perhaps we could have planned better for potential scenarios and the funding needs for investee businesses along their journeys, rather than be reactive, but the overall summary is positive. At a micro level, in retrospect I would have focused more on increasing gender diversity in the senior ISIF team earlier in the mandate, as we have since seen the value diversity can bring to the team. 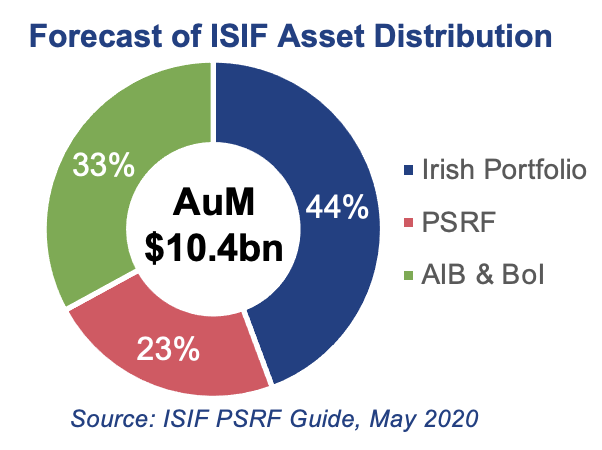