The Turkish Sovereign Fund was established in 2016 as the strategic investment arm of the Republic of Turkey. After a rocky start where the country’s President Erdogan rewamped TWF’s management and reshuffled the board by appointing himself as the Chairman, the fund seems to have finally found the support and stability to be among the world’s leading SWFs. The recruitment of Mr. Zafer Sönmez as its CEO in September 2018, after he had spent six years with Khazanah, has been instrumental towards that goal. We had the pleasure of catching up with Mr. Sönmez and discussing with him TWF’s recent progress and improvement of its GSR score. 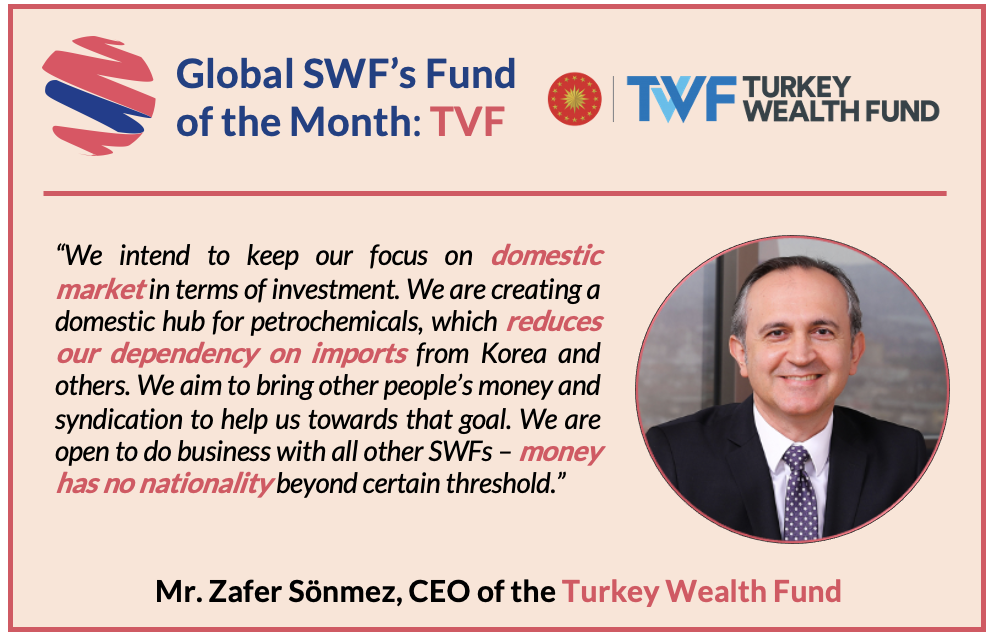 [GSWF] TWF has an ambitious mandate defined by four objectives – how do you define yourselves?

[TWF] TWF is not a weath fund per se, but an asset developent fund similar to Temasek and Khazanah, with the difference that we take on domestic greenfield risk. We are in the earlier phase of a J-Curve, and have three major inflows (dividends, leverage and monetizations) and three major outflows (investments, capital raise and debt service). In three years time, we aim to deploy USD 10 billion of investments per year.

[GSWF] What can you tell us about the recent Eurobond process that helped TWF be rated with a BB-?

[TWF] Turkey is a high-yield country and one of the very few emerging markets that have not declared moratorium since its inception so rating becomes less relevant for the country given its strong debt repayment track record. SWFs leverage themselves, and TWF will be tapping into that global pool of capital serving to SWFs. It is about lowering our cost of equity, blending our WACC, and building on the USD 33.5 billion of equity we manage.

[GSWF] TWF recently announced a joint investment fund with RDIF – will that be the first of many?

[TWF] We believe co-investments are smart way of attracting capital. We are very open for any further co-operations and joint investments with other SWFs or funds in the upcoming periods. On the other hand, we intend to keep our focus on domestic market in terms of investment.

[GSWF] Is your goal to keep improving TWF’s Governance, Sustainability and Resilience factors?

[TWF] We place a lot of importance into Governance, Transparency and Accountability, which we are improving every day. In terms of Sustainability, we do not pursue a traditional ESG definition but a sustainable dividend flow from our companies. Rather than NBIM, we follow the Dutch model, where they recovered from the Great Depression into a cash-rich economy.

[GSWF] What is the progress with the USD 10 billion announced investment in a petrochemical complex?

[TWF] We are creating a domestic hub for petrochemicals, which reduces our dependency on imports from Korea and others. We aim to bring “OPM” (Other People’s Money) and syndication to help us towards that goal. We are open to do business with all other SWFs – money has no nationality beyond certain threshold.

[GSWF] How has your life changed from your previous role leading Khazanah’s Istanbul office?

[TWF] I opened Khazanah’s office in Istanbul and was responsible for the USD 2.5 billion the fund injected into the country, and I was also their regional head covering Middle East and Africa. In my current role at TWF, I am able to apply all the lessons and experience I gained at Khazanah.

[GSWF] What is your vision for TWF in the long-term?

[TWF] We are members of the IFSWF and WEF, and would like to stay close to Global SWF and the SWF community. Five years down the road, I expect TWF’s AuM to grow from USD 33.5 billion to USD 100 billion, with a list of 20 to 30 co-investors and partners. We will then have offices in Beijing (which is already being pursued), London, New York and Africa (in a city to be decided), which will allow us to seek investment overseas beyond our domestic portfolio.