During Covid-19, the NDFI played an important role in Iran as it supported the production of vaccines and stabilized capital markets. With assets of over US$ 140 billion, the fund is now ready for some changes including investments overseas. We had the immense pleasure of hearing about its latest developments and future plans from its Chairman, Dr. Ghazanfari. 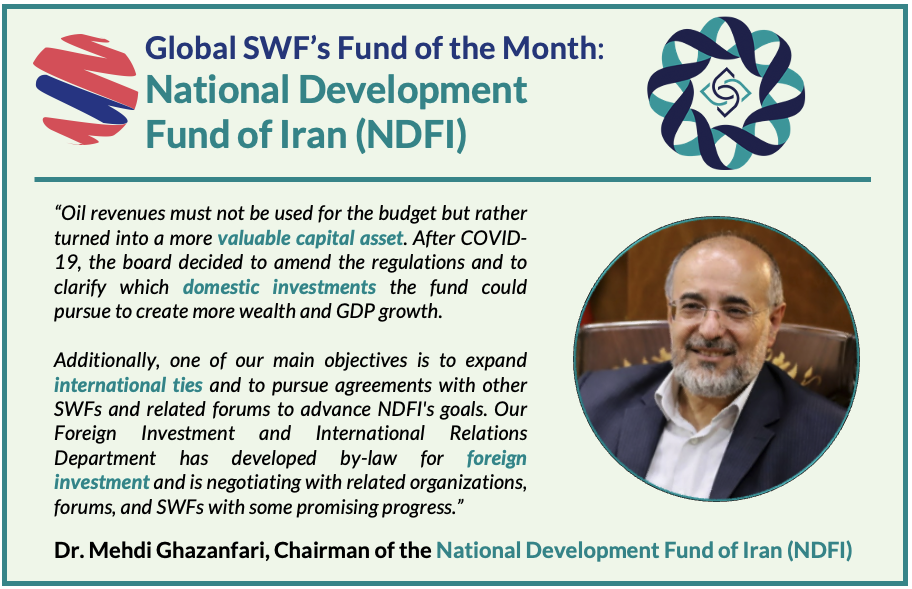 [GSWF] The NDFI was set up in 2011 to supplement the Oil Stabilization Fund. How are you ensuring that the fund is not rapidly depleted and survives in the LT?

[NDFI] In the regulations enacted in 2011, the governmental withdrawal was limited by special licenses, and the resources could only be used for sponsoring investment, export, and foreign investment mostly by the private sector. NDFI has proved more successful and greater resources were accumulated, as governmental withdrawals are considered loans to be repaid to the fund in both principal and loan interest. One ongoing challenge is that NDFI’s articles of association did not clarify what domestic investments it could pursue.

[GSWF] It was suggested that 32% of the oil revenues would be transferred to NDFI every year. What‘s NDFI’s AuM today?

[GSWF] Since the start of the pandemic, the NDFI has been heavily utilized by the government as a means of liquidity and funding of the Capital Market Stabilization Fund (CMSF). Is this a temporary solution or a permanent arrangement?

[NDFI] The pandemic was truly a global disaster and NDFI helped finance the production of medical equipment, medicine, and vaccines. It also pursued a capital injection into the capital market to stabilize the market and improve the conditions of small shareholders. However, the resources were provided as a loan, as required by the regulations and resolutions, and the government must repay its debt.

[GSWF] NDFI was recently allowed to invest in various sectors, including overseas. What does this mean for the future?

[NDFI] Oil revenues must not be used as a budget but rather turned into a more valuable capital asset. After COVID-19, the board decided to amend the regulations and clarify which domestic investments it could pursue in order to create more wealth and GDP growth. Additionally, NDFI enjoys sovereign immunity and there are ongoing efforts to set up advisory committees of financial, legal, and international affairs experts in order to scrutinize all aspects and ensure that the fund's resources will not be affected by US sanctions.

[GSWF] We understand that NDFI is no longer a member of IFSWF. What is the status of your international partnerships?

[NDFI] NDFI was an active player of the IFSWF and paid its membership fees regularly; however, this was not possible in the last few years due to the US sanctions and the secretary of IFSWF terminated the membership against the fund’s wish. One of our main objectives is to expand international ties and pursue agreements with other SWFs and related forums to advance NDFI's goals. This has led to the formation and expansion of the Foreign Investment and International Relations Department, which has developed by-law for foreign investment and is reaching out to and negotiating with related organizations, forums, and SWFs with some promising progress.

[GSWF] What are your views around Sustainability and Green Energy? Do you feel the need to diversify from Oil & Gas?

[NDFI] One of our proposals for transforming the fund governance is the diversification of NDFI's incoming resources. This involves NDFI also benefiting from revenues of public property and the export of mineral raw materials, and the transfer of the non-productive government assets to NDFI, which will take steps to make them income-generating, with the proceeds offered to the government.

[GSWF] How many people work at NDFI now, and do you expect any change given the potential investments overseas?

[NDFI] We are a small organization with about 100 employees, consisting of the board of directors, deputies, directors, experts, and service and logistics staff. However, the execution of our plans and proposals, including the expansion of international ties, will require us to improve the expert and managerial staffs and structures. We strive to complete most of these activities through outsourcing.

[GSWF] How have the first nine months of your mandate at NDFI been, after your previous role as Minister of Commerce?

[NDFI] I have been highly motivated and eager to get to know the people, goals, missions, and processes, trying to be a good listener before proposing any change for the better governance of the organization. Working in the ministry was much more difficult in terms of complexity and sensitivity; but here I feel that my job is more fruitful in terms of creating intergenerational justice and increasing the added value of oil revenues. Overall, I am satisfied with my work at NDFI given its mission and my colleagues. 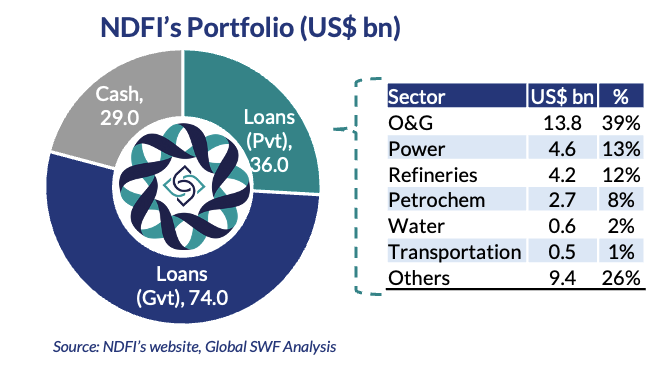