The new fund, which was first proposed by Chan in his budget speech in February, will target early stage finance rounds for tech startups in Hong Kong.

"In terms of IPO for biotech, I think we are the world's number two, just after the US, but there is a gap in Series B, Series A," he said.

The move is one of several measures to support R&D, which also include HK$440 million (US$56 million) for 16 State Key Laboratories, HK$10 billion (US$1.3 billion) to further promote the development of health tech, and injecting HK$200 million (US$26 million) into the Green Tech Fund.

The FY2022/23 budget allocated an extra HK$10 billion (US$1.3 billion) to the Hong Kong Growth Portfolio under the Future Fund (FF), which was established by the Chinese Special Autonomous Region (SAR) in 2015 with an allocation of more than HK$200 billion.  In his budget speech in February, Chan said he would invite the Hong Kong Science and Technology Parks Corporation along with Cyberport to identify tech enterprises "of strategic value to Hong Kong, and investment opportunities conducive to enriching the technology ecosystem".

The HK$22.4 billion Growth Portfolio was announced in 2021 and aims at enhancing the FF’s investment returns and consolidating the city’s status as a financial, commercial and innovation center. 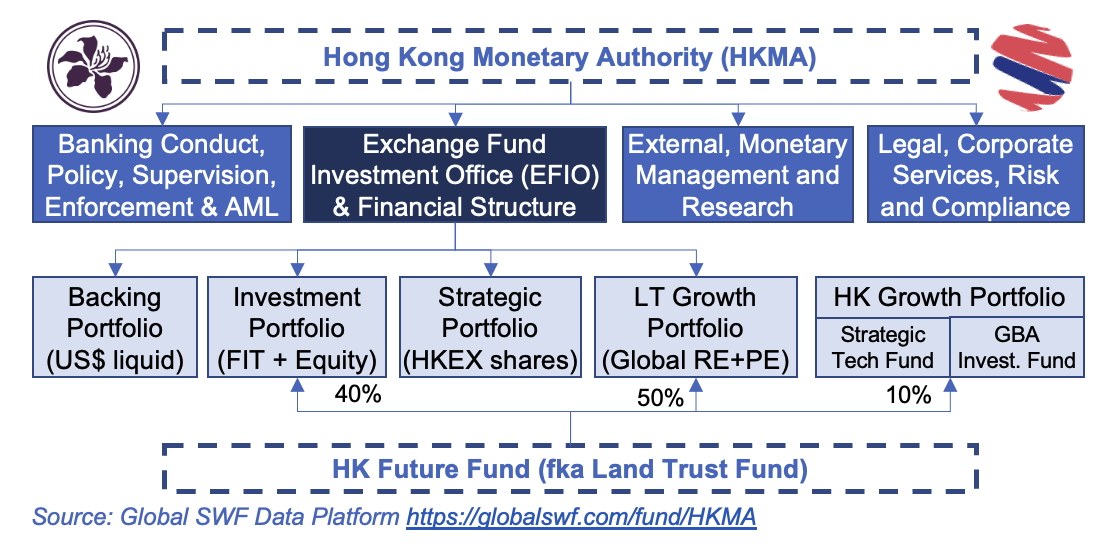 The FF’s assets sit within the Exchange Fund (EF), which is overseen by the Hong Kong Monetary Authority (HKMA), the territory’s central bank. The EF largely invests in external assets with 60% of the Future Fund’s assets placed into its long-term growth portfolio (LTGP), which invests in private equity and real estate. So far this year, the EF’s external assets have decreased US$ 41 billion (-8.0%), mirroring the poor performance reported across the sovereign investor universe. Its average annual investment return over 2015-21 was just 4.2%, putting it well behind most of its peers.

The tech fund seeks to claw back some of the competitiveness lost amid a turbulent period in Hong Kong’s history. Strategic investments aim to bring benefits to the territory’s economy. This is a departure from the established practice that the EF does not invest in Hong Kong due to potential conflicts of interest and linking savings too closely with the domestic economy.

The territory’s administration started earmarking funds for a Hong Kong growth portfolio in the 2020/21 budget, seeded with the equivalent of 10% of the Future Fund’s assets and totalling HK$22 billion (US$2.8 billion) to support its strategic and political objectives. The growth portfolio is focused on diversification and supporting Hong Kong’s status as a financial, commercial and innovation centre.

HKMA’s approach mirrors that of Singapore’s Temasek, which announced last October that it is planning to pour S$1 billion per year (US$740 million) into deep-tech innovation in Singapore, in addition to the government’s S$25 billion (US$18.5 billion) Enterprise 2025 plan for tech development. Investment will cover life sciences, foodtech and advanced manufacturing and is intended to position Singapore as a global hub for tech and innovation, in a similar way as it has reinvented itself in the past in shipping, oil refining, petrochemicals and manufacturing. Hong Kong sees the need to raise its game in order to match Singapore’s growing strength, although the HKMA lacks Temasek’s experience in venture capital and private equity.