Fund of the Month (Nov'21): PensionDanmark

PensionDanmark is one of Denmark’s largest labor market pension funds, with US$ 49.9 billion in assets as of June 30, 2021. It is also known as one of the world’s greenest investors, with US$ 3.7 billion invested and/or committed to unlisted renewable energy, and for having co-founded of the UN-convened Net-Zero Asset Owner Alliance (NZAOA). We had the immense pleasure of chatting with its CEO, Mr. Torben Möger Pedersen, who has led the fund since its establishment in 1993. 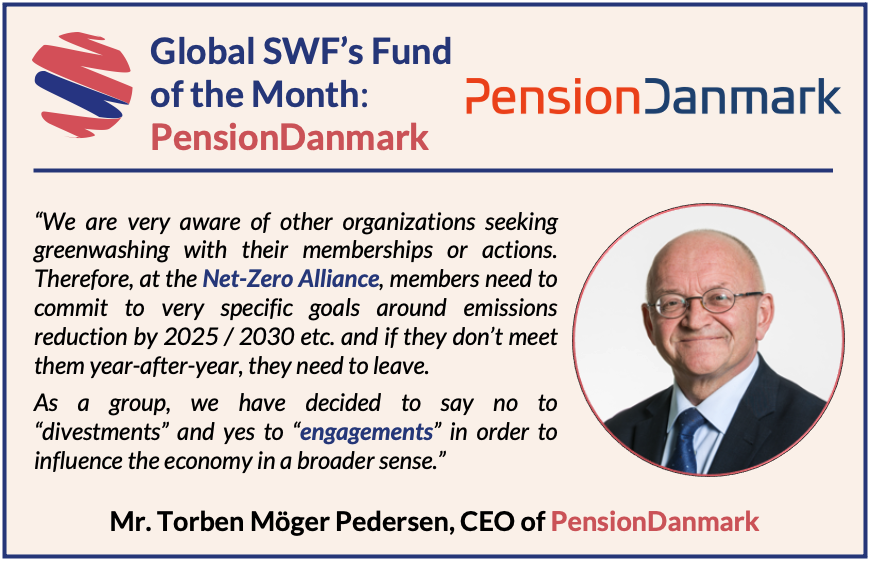 [GSWF] The Danish pension system is highly sophisticated with leading managers such as ATP and PensionDanmark. How do you compare it with the Dutch and Swedish systems?

[PD] In fact, Danish pensions have been recognized among the world’s finest and work under define contribution (DC), just like the Canadian and Dutch systems. In the early 1990s, Denmark grouped all blue-collar workers under the same mandatory system. Since 2008, all workers pay 12%-15% of their salaries for pensions. We focus on the private sector employees including construction, drivers, etc., covering a total of 25,000+ employers, 400,000+ active members and 80,000+ pensioners.

[PD] We have about US$ 2.5 billion of contributions every year, which has accelerated our growth. Along with the returns, pensioners can expect between 50% and 70% of their salary. Taxes are deferred in the sense that contributions are deductible, but distributions are taxed, which creates a sustainable financial ecosystem – for which we have been received several awards.

[GSWF] What is the difference in strategy between younger members (7.4% return) and older members (6.2% return)?

[PD] The allocation changes automatically according to their age group – for the younger members, it is riskier with equities, while the older members have safer products. Members can always opt out of the default allocation but in practice only 2% chose to do so.

[GSWF] Your unlisted green infrastructure assets represent 5.1% of your total portfolio. How much more will they grow?

[PD] We started our investments in green unlisted assets ten years ago to pursue higher returns, risk diversification and branding. Our first project went well, and we decided to increase our role – but most of it is channeled through Copenhagen Infrastructure Partners.

[GSWF] Copenhagen Infrastructure Partners has raised over US$ 16bn in four funds – what is the ultimate target?

[PD] In the beginning we were the only partners in CIP, but today we have more than 100 LPs from the US, Europe, Taiwan, and Australia. CIP has become of the world’s largest investors in unlisted renewable infrastructure. We are still an anchor investor in the six funds but are happy to welcome other partners that give us scale and reputation. CIP is heavily investing in offshore wind floating platform – we use wind power from the sea as a substitute for the fuel and also as a means of decarbonizing society (“Power-to-X”).

[PD] Our issues of PRI were solved, and PRI is a central part of the NZAOA. We are very aware of other organizations seeking greenwashing with their memberships or actions. Therefore, at the Net-Zero Alliance, members need to commit to very specific goals around emissions reduction and sustainability by 2025 / 2030 etc. and if they don’t meet them year-after-year, they need to leave.

[GSWF] You were one of the six founding members of the NZAOA, which has now 52 members – why is it important for other funds to join the net-zero pledge by 2050?

[PD] We were a founding member of NZAOA, and today there are 52 of us, and some more that will be announced at the COP26  in Glasgow in the next few days. As a group, we have decided to say no to “divestments”, and yes to “engagements” – we at PensionDanmark are very small on our own but are bigger with the NZAOA group and can influence the economy substantially in a broader sense. Our employees push us as they want to work for a fund that pursues a better world.

[GSWF] You have hired over 100 employees in the past 5 years, increasing the headcount to c. 300. What is the reason behind this growth, and will it continue?

[PD] We have transitioned from a very outsourced organization to a more active investor. This fact, along with an increase of focus on private markets, has contributed to a larger pool of internal personnel. However, we are still the most cost-effective pension system in Denmark, which is among our objectives. 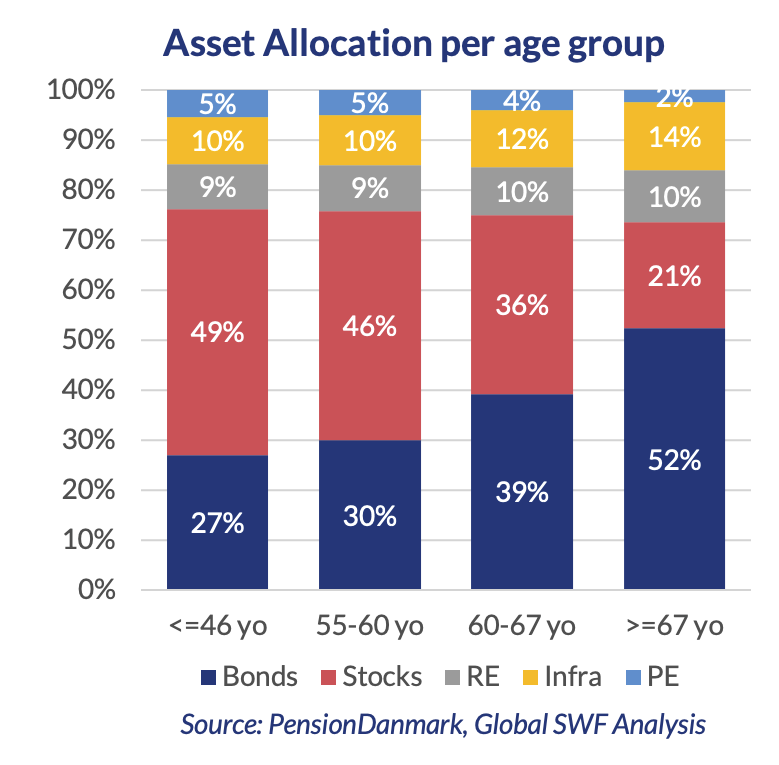