Investments in Renewable Energy are still inadequate and minuscule compared to the firepower of State-Owned Investors: SWFs have invested US$ 35.3 billion in 105 deals, and PPFs have deployed US$ 40.6 billion in 94 transactions. The efforts are bigger, in relative terms, in those organizations with dedicated programs, e.g. Mubadala’s Masdar, or PensionDanmark’s CIP.

However, the pace has been accelerating remarkably in the past seven years, with US$ 15 billion deployed so far in 2021, and we expect these figures to increase significantly in the near future as funds commit to ambitious green goals, e.g., CDPQ hopes to raise its “green portfolio” to US$ 44 billion by 2025 and NBIM aims to spend US$ 11.4 billion in the next 14 months. The latter has also a significant portfolio of green stocks, valued at US$ 11.8 billion as of December 31, 2020 (see list here).

In terms of regions, North America and Northern Europe continue to be the most popular destinations, thanks to a high level of opportunity and a positive regulatory environment, as well as the efforts of certain countries, such as the UK, around FDI. However, we expect the renewable energy industry to pick up in growth markets too, as SWFs push the domestic agenda.

Lastly, partnerships such as Cubico Invest (OTPP, PSP), Arevon Energy (ADIA, APG, CalSTRS) and co-investments such as Greenko Energy (ADIA, GIC) and Generate Capital (AP2, AusSuper, QIC) will be increasingly popular as the industry becomes hotter and sovereign investors seek to rely on external expertise to catch the green wave. Hopefully, the trend will endure. 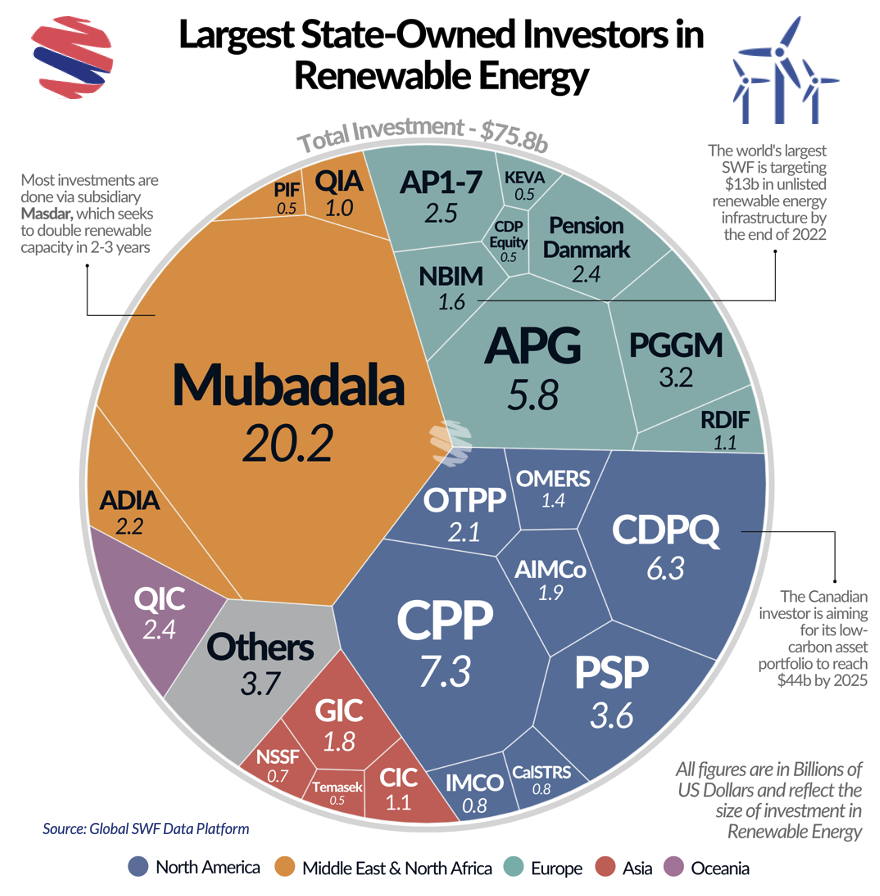