We are pleased to present the results of the 2021 edition of our GSR Scoreboard, which has become a critical tool of analysis of Sovereign Investors’ Governance, Sustainability and Resilience efforts.

The scorecard raises 25 questions: 10 related to Governance, Transparency and Accountability; 10 concerning Sustainability and Responsible Investing; and five on Resilience and Legitimacy. These questions are answered binarily (Yes / No) with equal weight and the results are converted into a percentage scale for each of the funds. The study is applied to 100 major SOIs, generating 2,500 data points.

For second year in a row, the only fund to score positively on all elements was Australia’s Future Fund. Despite keeping a low profile when compared to some of its peers, the Australian federal investor is best in class when it comes to GSR issues. Along with a sound investment strategy, this commitment has historically yielded excellent results and allowed the Fund to make money for the nation's citizenry in both rising and falling markets. We discuss Future Fund’s success factors with its Head of Corporate Affairs in section 6 of the report.

Following the leader are three funds with a 96% overall score. Norway’s NBIM and New Zealand’s NZ Super continue to maintain a high position and are highly regarded for best practices. We have considered that the Norwegian fund has an economic mission (element #13) and a domestic focus (element #19) via its sister organization Folketrygdfondet, which is funded by the same owner, Government Pension Fund, and invested US$ 1bn to improve liquidity and capital supply in the Norwegian bond market during 2020. This year they are joined in second place by Canada’s CDPQ, which manages capital from 42 depositor groups including several pension plans and a SWF (Generations Fund). The Québec-based investor keeps growing as an investment organization and demonstrated transparency after its recent change of structure and focus.

Three additional funds scored a very respectable 92%, including Singapore’s Temasek, which continues to be Asia’s best ranked Sovereign Investor, especially around Sustainability and Resilience. Joining it is South Korea’s pension fund NPS, which continues to grow its AuM and returns and is pursuing impact investments and  partnerships, perhaps to offset the significant departure of investment executives. Alongside them is Alberta’s AIMCo, which manages 32 pension and endowment funds including AHSTF – it may not make as many headlines as its peers, but it has built an impressive program both at home and overseas.

The laggards continue to be the Middle Eastern funds, which are the worst performers when it comes to governance and, especially, resilience. Covid-19 and low oil prices triggered significant withdrawals to funds in the region during the past 12 months, and most were found to be swimming naked. Only four funds managed to exceed the 50% mark: UAE’s Mubadala and DP World, Libya’s LIA and Bahrain’s Mumtalakat.

A total of 39 funds fail the GSR test and some perform badly: CEOs sacked overnight, managers prosecuted for misuse of public funds, and governance crisis are some of the red flags that are, unfortunately, still too common in the industry.

All in all, the Top 100 Funds scored well on Governance (6.7/10) and have also improved their Sustainability (5.1/10) if we consider a like-for-like analysis (see next page). However, the Covid-19 crisis has demonstrated that Resilience (2.46/5) is still an issue for Sovereign Investors around the world. Three funds (FAEP, FEF, FEIP) were recently exhausted, some others (FSDEA, KIA, OIA) were reformulated or merged, and many more have still a lot of work to do when it comes to legitimacy, liquidity risk, discipline, spending control, strategic asset allocation, and crisis management. And the time to tackle all those issues is now. 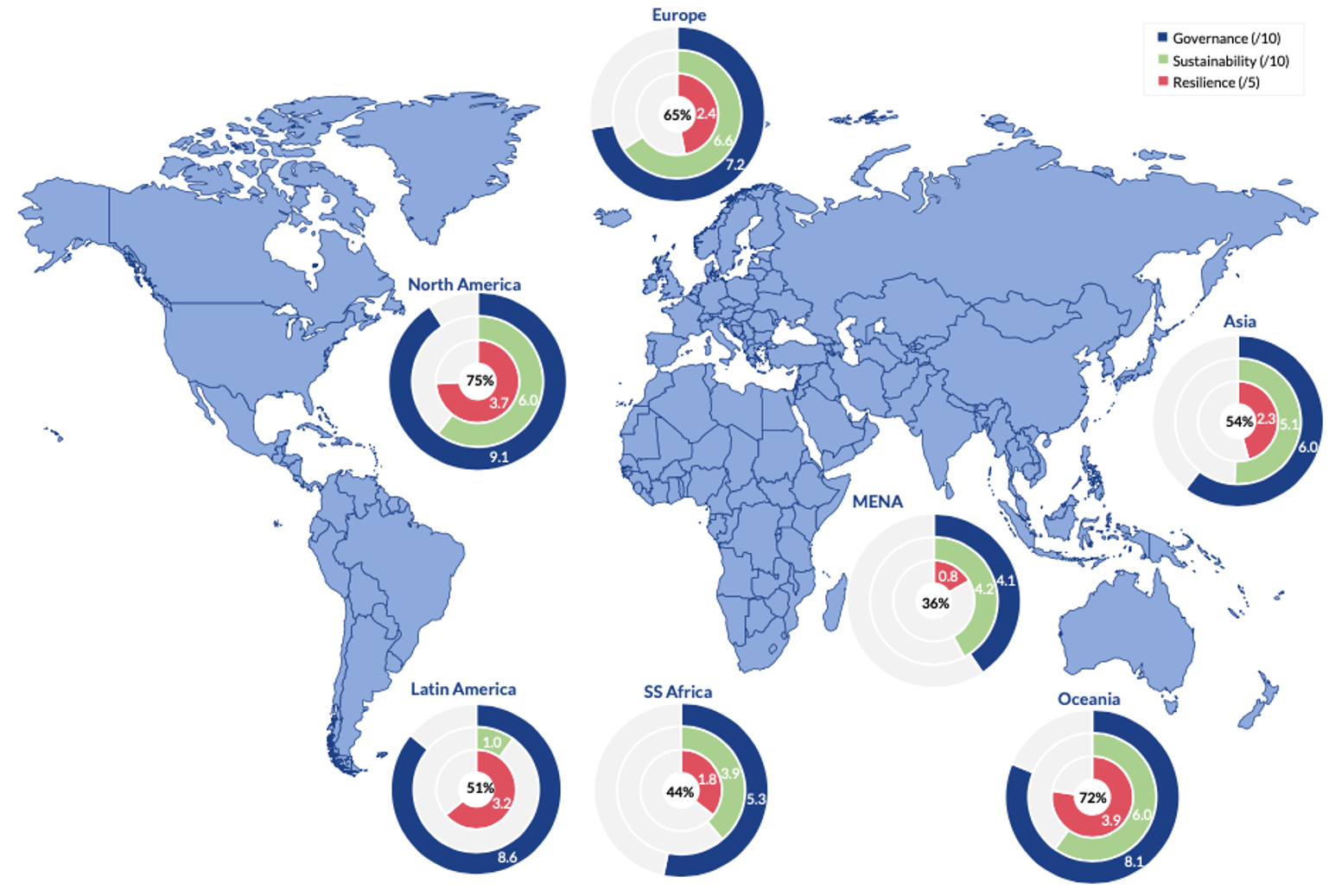 Note: The latest version of the report can be found at www.globalswf.com/reports and has been edited to remove a quote about the Brunei Investment Agency on page 4, for which we apologize.