What will Singapore’s GIC Do With Its US$137bn Liquidity Injection?

Singapore’s sovereign wealth fund GIC will be boosted by around S$185 billion (US$137 billion) following the passing of a law that will lead to a reduction in foreign reserves held by the Monetary Authority of Singapore (MAS).

Parliament passed a bill to allow the MAS, the island state’s central bank, to purchase Reserves Management Government Securities, a new type of non-marketable security issued by the government. This will enable the reduction of foreign reserves held by the central bank to 65-75% of GDP with the remainder transferred to the GIC.

Currently the reserves total S$566 billion (US$419 billion), representing around 111% of GDP. The excess will be transferred in stages, which could see the fund’s total assets under management raised to more than US$880 billion from the current estimated US$744 billion. As a result, GIC stands to become the world’s third largest sovereign wealth fund after Norway’s Government Pension Fund Global (GPFG), under the control of Norges Bank, and the China Investment Corporation (CIC).

GIC is regarded as best able to manage the excess as it can achieve higher returns through investments, rather than maintain the reserves in highly liquid assets. It does not report single year returns to avoid an excessive focus on short-termism. However, Global SWF has been able to estimate the annual performance based on the reported 5-year, 10-year and 20-year rolling returns: from April 1, 2020, to March 31, 2021, GIC returned a record 37.5%. Considering GIC’s asset allocation, a Global SWF-built up reference portfolio grew a 31% - well behind GIC’s actual yield, demonstrating the fund’s ability to secure a strong yield. 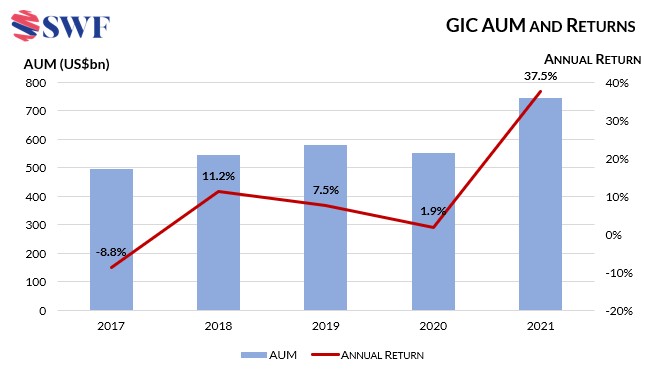 The big question will be where GIC intends to invest the massive cash injection, which equates to an estimated 18% of the current AUM. Global SWF data shows that the fund is ramping up its investments in alternatives with record deployment of capital in 2021, estimated at more than US$34 billion – the highest level of any sovereign wealth fund over the year.

In FY2020/21, the investor reduced its weight in bonds, to the benefit of emerging market equities, real estate and private equity. It also increased its weight in Asia ex-Japan, reflecting the focus on Asian venture capital and real estate including not only China but also Indonesia, India, Vietnam and Malaysia.

Global SWF transaction data shows that in the 2021 calendar year, all market segments saw an increase in investment by GIC. Yet, the overwhelming theme was capitalizing on market disruption caused by the Covid-19 pandemic, in which innovation in technology and supply chains took center stage. Real estate saw the biggest increase, growing 152% in terms of value and representing 45% of total investments and logistics taking property the lead; GIC spent US$9.1 billion in logistics properties in major deals in the US, Europe and Australia.

Another big gainer was the retail and consumer segment, growing 140% with concentration on e-commerce platforms – chiming with the focus on logistics property, which is growing on the back of delivery chains.

Investments in healthcare-related companies also boomed by 363% to represent 9% of total capital deployed with a strong focus on pharmaceuticals and clinics as the world sought to get to grips with the long-term consequences of coronavirus. In 2021, GIC invested in a consortium of ADIA, Blackstone, Carlyle and Hellman & Friedman to buy a majority stake in medical supplier Medline Industries in a multi-billion-dollar transaction. Medline is one of the largest privately-held manufacturers and distributors of medicals supplies such as surgical equipment, gloves, and laboratory devices used by hospitals around the world. It snapped up a 16% stake in Malaysia’s Sunway Healthcare, a hospital operator for US$180 million. The fund also led a consortium investing US$203 million in VMC, the parent of Vinmec International General Hospital, Vietnam’s premier private hospital developer and operator. But the SWF did not just restrict itself to emerging markets and made a US$1 billion investment in Biomat USA, which operates a network of blood plasma collection centers.

The injection of liquidity is likely to ramp up investments in these sectors as the sovereign investor hunts for long-term yield.

GIC is an increasingly voracious venture capital investor with US$2.8 billion invested in the 2021 calendar year - the second highest allocation among state-owned investors, after Singaporean stablemate Temasek. Nearly half the value of its VC allocation in 2021 was in pre-IPO rounds while just 7% was in Series A and B. Indian start-ups garnered the most attention from the SWF, making up 47% of its VC in e-commerce platforms such as Flipkart, Zomato and Delhivery, followed by the USA with 25% in Silicon Valley tech companies.

Geographically, GIC has focused on developed markets in North America and Europe. Yet, there is a discernible trend towards emerging markets and much of the liquidity boost is likely to be channelled into markets such as Brazil, China, India, Indonesia and Vietnam, which were among its top targets in 2021. These markets strongly resonate with the sectors GIC prioritized in 2021 with massive long-term potential as the economies develop, converging with developed markets. 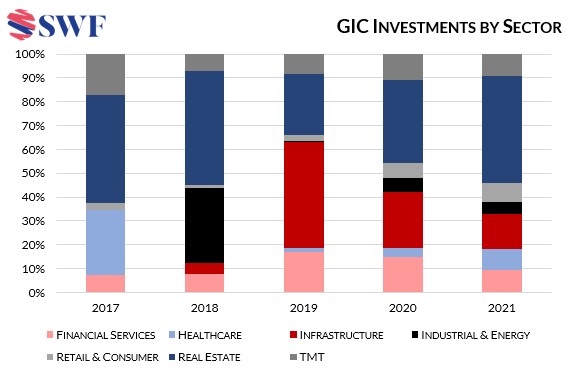