In the year to date, SOIs have announced Australian real estate investments worth US$8.5 billion (up from US$5.5 billion in the whole of 2020), making the country one of the top targets for acquisitions, with a further US$1.1 billion in infrastructure investment (compared to US$2.2 billion in 2020). However, they are making a significant shift into other sectors that are boosted by the market disruption, namely logistics real estate.

The Abu Dhabi Investment Authority (ADIA), the emirate’s biggest sovereign wealth fund, is offloading more of its Australian hotel portfolio as the travel and tourism sector remains weak amid the ongoing lockdown. ADIA is set to sell two Sydney hotels for about US$500 million, according to Reuters. It had acquired 31 hotel properties from Tourism Asset Holdings in 2013, making it Australia’s biggest hotel owner, but sold 15 of them in 2016 for US$147 million in 2016.

In its annual review published last week, ADIA noted that “the hospitality industry was among the hardest hit by the pandemic. In Asia Pacific, hotels experienced a rebound in demand in the final quarter of 2020, but overall the sector remains under stress, particularly in Europe and the United States.”

Yet, the impact of Covid has not prompted the hotel divestments. Instead, ADIA is looking at liquidating real assets to broaden its private market exposure as it bolsters its venture capital strategy as well as its investments in emerging markets. As a long-term investor, the decision to sell off some relatively mature Australian hotel assets is related to ADIA’s rebalancing of its portfolio rather than the temporary blip in tourism numbers - although the timing of the decision means that it is selling on a downturn, which potentially means it will not benefit in gains in the eventual market upswing.

There is ongoing confidence in the long-term demand fundamentals of Australian travel and tourism. The effects of the pandemic are likely to be short-term with an expected surge in tourism over the medium-term. This could lead to capacity constraints, causing asset prices to recover sharply. Indeed, the tourism slump did not stop Singapore’s GIC from joining forces with Australian fund manager Salter Brothers and Swiss global private equity firm Partners Group to acquire the Australian Travelodge hotel portfolio for A$620 million in July. 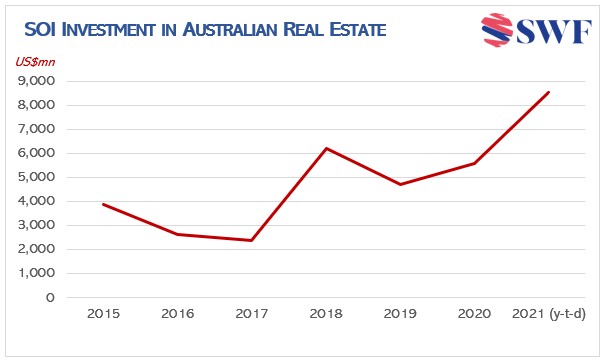 Just as new hotel construction has ground to a halt, airport capacity expansion has also temporarily reduced due to lockdown measures, which is generating renewed interest in aviation infrastructure. Sydney Aviation Alliance, a consortium including Australian public pension funds QSuper and AustralianSuper as well as IFM Investors and Global Infrastructure Partners, has made a non-binding offer of A$23.6 billion for the publicly listed Sydney Airport. It raised its offer from two previous offers of A$22.3 billion and A$22.8 billion, which the airport’s owners claimed under-valued the company. The new offer is a significant premium over its current share price. Sydney Airport's board said that, if the SAA were to make a formal offer, it would recommend that its shareholders accept the deal, making it one of Australia’s biggest buyouts and leading to the company’s delisting.

GIC is planning to invest an estimated US$2.5 billion in its Australia Logistics Partnership with ESR and Abu Dhabi’s Mubadala is backing a three-way joint venture with LOGOS and KKR. In a  A$1.67 billion transaction announced in July, AustralianSuper became the leading investor in a consortium that acquired Australia’s largest intermodal freight facility the Mooreback Logistics Park, with other investors including AXA, Canadian public pension fund CDPQ and New South Wales state-owned investor TCorp.

Residential property is also gaining favor. In February, Dutch public pension fund manager APG and Ivanhoé Cambridge, the real estate arm of Canada’s CDPQ, backed Australia’s biggest ever build-to-rent real estate fund. Greystar’s US$1 billion Australia Multifamily Venture I fund was seeded with two BTR projects set to start up in Melbourne this year, which will develop at least 1,300 rental homes. The long-term objective is to exceed 5,000 homes. Currently at a nascent stage, the sector is set to grow fast over coming years, assisted by changes to the land treatment tax.

Increasing SOI interest in Australia led to the announcement in May that GIC was set to join four other foreign state-owned investors in setting up an office in Sydney. The office, which will be the fund’s 11th worldwide, will be established in 2022. Other funds with offices established in the city are all Canadian public pension funds: CDPQ, CPP, OMERS and OPTrust. GIC chief executive Lim Chow Kiat said, “We believe the new office will better support the management of our existing assets and increase interaction with local partners so we can generate more value-add together.”