The acquisition of a 75% stake in Paddington Central – a significant area of prime real estate regeneration in London – by Singaporean sovereign investor GIC demonstrates a revival of interest in the British capital’s real estate market, as it shakes off the risks associated with Brexit and the pandemic.

The fund bought the stake from British Land for £694 million (US$884 million), which is 1% below the book value; BL retains a 25% stake and remains asset manager for the campus. GIC has previously partnered with BL on 5 Broadgate, an office building which was sold in June 2018 for £1 billion. Global SWF remarked last February that the City of London Corporation’s approval in February 2-21 of a 38-story development at 2 Finsbury Avenue, planned by Singaporean sovereign wealth fund GIC and British Land, suggested that  state owned investor (SOI) interest in the London real estate market could be reviving with greater certainty over UK-EU relations and the prospect of a post-pandemic recovery.

The Paddington Central development is an office-led mixed-use campus with retail and leisure uses. The latest transaction suggests GIC is not only satisfied with the performance of their previous venture, it demonstrates a growing interest in London’s real estate market.

Tracy Stroh, Region Head of Europe, Real Estate, GIC, said, “We are seeing returning demand in the take-up of new office spaces that are of high quality and in prime locations. We are pleased to partner with British Land again and look forward to leveraging their best-in-class capabilities to drive value across Paddington Central. We believe this investment will be a good addition to our Europe portfolio.”

Indeed, office acquisitions are speeding up, despite concerns over valuation and sustainability of London market prices. Until recently, the British capital offered opportunities to capture high, stable yields, particularly for Middle Eastern funds. However, the brakes were applied when the British public voted to leave the EU in June 2016.

Global SWF research demonstrates the slump in SOI investment in UK real estate, which is dominated by London property. In 2017, the year after the referendum, interest almost dried up, with investment dipping well below US$1 billion amid a slump in interest in office property. In that year, the UK represented little over 1% of total SOI investment in real estate, down from 10% in 2016 and a peak of 34% in 2013. At the same time, SOIs virtually vanished from the London office market after the referendum. 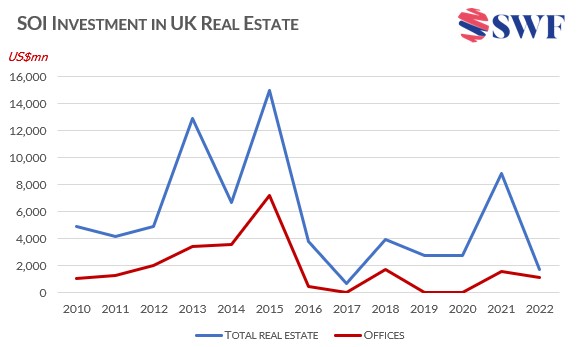 In 2021, total investment by sovereign investors in unlisted British real estate was US$8.9 billion, according to Global SWF’s asset database, representing a threefold increase over the previous year and the highest level since 2015. Office developments represented 18% of transaction value following two years of zero investment.

Property consultant Knight Frank has forecast a 17% rise in investment in office real estate in London in 2022, totalling £10.5 billion. However, London offices will represent under a half of the forecast £21.3 billion invested in UK offices due to “pent-up demand complemented by the broadening of different investor types provides the backdrop for record cross-border capital flows.”

Sovereign investors are, however, broadening their horizons in UK real estate, looking at provincial cities such as Birmingham and life science campuses in areas such as Oxford and Cambridge. Last year, GIC bought the Oxford Science Park for £160 million (US$217 million). Offices are not the main interest of sovereign investors with logistics real estate having an increasing appeal. In 2021, logistics represented 27% of SOI transactions in British real estate, while so far this year the sector has contributed 17% of investment. Logistics investments are also more geographically spread out, enabling diversification away from the capital’s office market.

Last year saw SOIs invest in towns as diverse as Dunstable, Cambridge, Daventry and Milton Keynes. The trend points to greater awareness of yield-generating assets across the UK’s full geography and the full range of sectors, from office blocks and retail to residential housing and logistics. The rise of logistics also goes hand-in-hand with the development of e-commerce and the demand for delivery networks.

A decade ago, SOI interest was focused on Arab funds buying iconic trophy assets, but today the London and UK real estate market is involving a broader range of funds with a more sophisticated outlook, seeking partners with established sectoral exposure. GIC’s partnership with BL in Paddington Central will not be the sole big transaction and we expect a slew of SOI investment in coming quarters.