With markets in turmoil, the Turkey Wealth Fund (TVF) has seen its total assets under management plunge to US$22 billion according to Global SWF estimates – nearly half the value it started with six years ago – but the fund is now stepping in to help resolve the massive challenges facing Turkey in an era of multiple global crises.

When President Recep Tayyip Erdoğan established the TVF in the month after the failed coup of July 2016, the sovereign investor had a grand ambition to finance strategic mega projects, contributing 1.5% annual GDP growth over 10 years, and overseeing the growth and deepening of the country’s capital markets. It was formed by the pooling of state-owned holdings that had been under the jurisdiction of the Privatization Administration and the Treasury, giving it control of strategic economic assets that at the time were worth an estimated US$39 billion. The pandemic, the disruption of global supply chains, the sharp depreciation of the lira, and the geopolitical shocks emanating from the Russian invasion of Ukraine have eclipsed the initial high ambitions.

The fund’s role has instead turned to supporting and restructuring sectors for long-term economic stability. Inflation and the plummeting value of the lira are largely responsible for TVF’s fall in US$ value. Yet, these will prove to be passing phases compared to the horizons of sovereign wealth funds, and TVF has demonstrated that it can act as a catalyst for foreign direct investment.

A strategic fund’s performance should not be judged solely by AUM or returns, but its impact on the overall economy and TVF will be measured by the success of its interventions and acquisitions, not the current US$ value of its portfolio. Unlike sovereign funds that are focused on inter-generational savings and fiscal stabilization, funds like TVF are intended to rehabilitate, restructure and renew state assets as well as stimulate economic development.

TVF’s operations are exempt from a number of laws governing privatization, capital markets, public procurement and competition. With less regulation, it has the power to dispose of its assets, issue securities, obtain services and make acquisitions. This enables TVF to act more nimbly to crises. Rather than “failing” in commercial terms, TVF is following its mandate by stepping in to prevent the demise of strategic sectors that are suffering from the impact of largely unforeseen, exogenous shocks to the Turkish economy. Such moves are not unusual, even for developed economies where governments supported banks, including acquiring equity, in the wake of the 2008 global financial crisis. 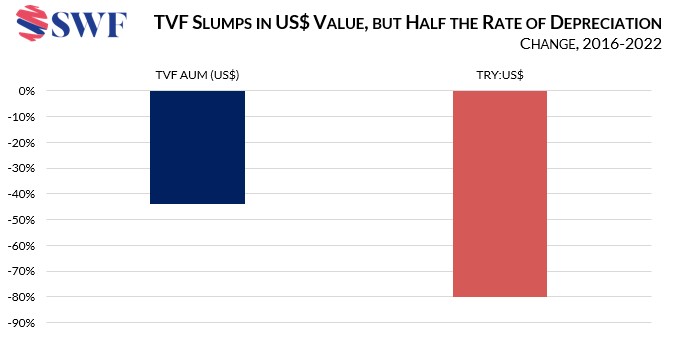 This week, TVF announced it had signed a share purchase agreement to acquire 55% shares of Türk Telekom – Turkey’s second biggest telecoms operator – from LYY Telekomünikasyon for US$1.65 billion, taking the fund’s stake in the listed company to 62%. The Turkish government owns a further 25%. The move represents a move towards renationalization, reversing the liberalization of the telecoms sector that began in 2004, and comes as fixed line connections have dwindled to 12 million while the number of registered mobile phones total more than 82 million with 90% on 4G networks. TVF’s majority stake in Türk Telekom follows its acquisition of a 47.1% stake in Turkcell Holding (which owns 51 per cent of Turkcell) from Sweden’s Telia in June 2020.

TVF’s growing ownership in the telecoms sector follows its decision last month to increase the capital of Turkey’s biggest bank, Ziraat Bank, by TRY21.8 billion (US$1.6 billion), as well as US$2 billion in a fresh capital increase for Halkbank and VakıfBank earlier this month. The fund previously injected a total of US$6.7 billion to strengthen the capital of state lenders in two separate rounds in 2019 and 2020, financed through bond sales by the Treasury and Finance Ministry to local banks. The investment in the banking sector is intended to address the yawning current account deficit and stabilize the currency.

Previous interventions in the financial sector came at the beginning of the pandemic in April 2020 when TVF completed the merger of six state-owned insurance, life and pension companies under TVF Financial Investments with an investment package worth TRY6.54 billion – paid for with special domestic debt securities.

Aside from economic challenges, TVF’s journey has been market by a rapid and unsettling turnover of leadership. Internal disagreement over strategy and control claimed the scalp of its first chief executive, banker Mehmet Bostan, in September 2017, while he was representing the fund at their first IFSWF event in Astana, now Nur-Sultan, in Kazakhstan. Bostan had been seeking to use the fund for external investments and deepening the country’s capital markets.

After Bostan’s dismissal for ‘poor performance’, stock exchange chief Himmet Karadağ was appointed temporary chair, but the fund remained in stasis until the appointment of Zafer Sönmez in September 2018. Prior to joining TVF, Zafer had been the country manager for Khazanah in Istanbul, and he had grand plans for his country’s SWF, as we highlighted in our August 2020 newsletter. Yet, just three-and-a-half years later, Erdoğan fired Zafer and replaced him with Arda Ermut was the head of Turkey's Investment Office between May 2015 to February 2020, a board member of TWF between September 2018 to November 2020 and a board member of Turkey's national flag carrier Turkish Airlines from June 2019.

TVF has the Confidence of Arab Sovereign Investors

The rapid changes at the top along with the TVF’s interventions to support strategic sectors under stress have not deterred co-investors in the sovereign investor universe.

In January, TVF announced it was launching a US$250 million technology fund to bolster Turkey’s evolving tech sector and encourage inward investment. Turkey’s tech sector has already attracted interest from foreign sovereign investors. In 2021, Abu Dhabi’s ADQ and Mubadala backed online grocery deliverer Getir in a Series D round, while ADQ joined with Qatar’s QIA to back e-commerce platform Trendyol, Turkey’s first “decacorn” and one of Europe’s biggest startups. The decision to branch out into tech financing indicates the importance Ermut’s leadership is giving to Turkey’s considerable tech potential.

In November, TWF secured a deal with its US$110 billion Abu Dhabi counterpart ADQ on the sidelines of a conference between Turkish President Recep Tayyip Erdoğan and Abu Dhabi Crown Prince Mohammed bin Zayed (MBZ). ADQ announced that the UAE had created a US$10 billion fund to support strategic investments in Turkey, including in the energy and health sectors. It also signed a partnership pacts with the Turkey Investment Office to explore opportunities in energy and utilities, healthcare and pharma, agriculture, transportation and logistics. With CCN Holding, it also plans joint investments in hospitals and clinics.

One of ADQ’s wholly-owned portfolio companies AD Ports signed a strategic partnership with TVF to collaborate on investment opportunities at port developments and operations, including logistics. Abu Dhabi Securities Exchange (ADX) and Borsa Istanbul, also portfolio companies of ADQ and TVF respectively, agreed to further develop the financial services sector in the UAE and Turkey.