The Elephant in the Room - are Sovereign Investors beating the markets?

Comparing returns across State-Owned Investors is never easy and it always takes a lot of assumptions and disclaimers. Yet, most funds have now reported their FY21 results, and we have looked at the average investment returns for the past six years (which we consider a fair investment cycle) across 20 major SWFs and 20 major PPFs in an apples-to-apples analysis.

An important caveat is that investors have different fiscal years: of the universe above, seven funds report on March 31 (notably, CPP, GIC, GPIF and Temasek), 10 funds report on June 30 (notably, CalPERS, CalSTRS, Future Fund and NZSF) and two funds report on August 31 (Texas PSF and TRS). The other half does it on December 31, and slightly benefits for it.

Also, ADIA and GIC report returns on a rolling returns basis: 20-yr and 30-yr the former; and 5-yr, 10-yr and 20-yr the latter. We have internal models that estimate the single-year returns, but these have been neither confirmed nor denied by the funds.

It is undeniable that FY21 was a great year for investing. As a result, all funds except for one (OTPP) enhanced their 6-year average return we showed in the same chart at this time last year. However, we expect these figures to deteriorate next year, given the performance of the markets in 2022 so far, and the first FY22Q1 results we have seen out, e.g., NBIM’s -4.9% loss. 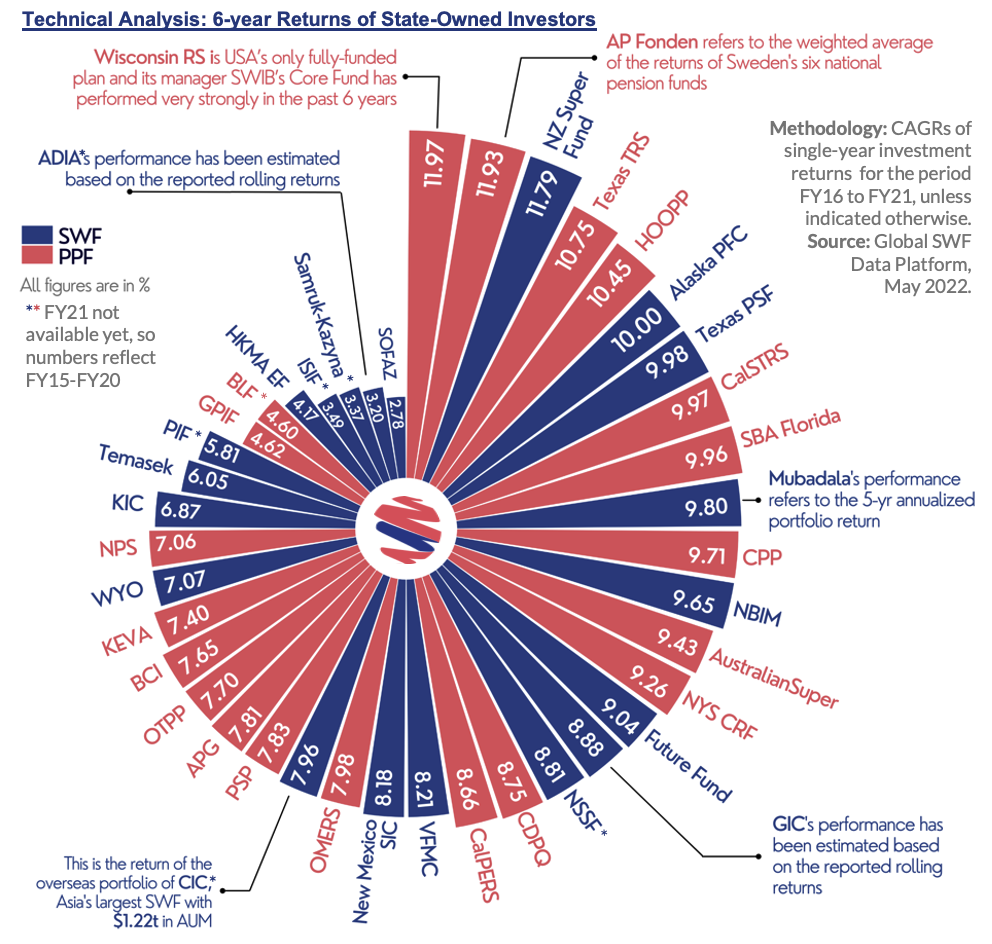 Now, if we look at the broader universe, we can determine the average profitability of the industry for the past 10 years. Intuitively, stabilization funds and strategic funds report lower averages, while savings funds and pension funds have better results, given their risk appetite and asset allocation. The average return for a Sovereign Investor in that period was 7.3%.

In that context, one could question the rationale of establishing and maintaining a heavily-staffed and costly Government-owned investment organization. Given the accelerated growth and popularity of such vehicles, we would expect the question of profitability to come up more and more often on the way forward.