South Korea’s National Pension Service (NPS) has appointed a new chair as the fund faces a set of challenges amid an increasingly difficult economic outlook.

The US$652 billion fund’s new Chairman Kim Tae-hyun, a career government finance bureaucrat, has transferred from the state-run Korea Deposit Insurance Corp (KDIC), where he had served as CEO for less than a year, to begin his three-year term. The pension fund had been without a chair for four and a half months since Kim Yong-jin ended his term in April.

South Korea’s recently elected President Yoon Seok-yeol appointed Kim as the administration looks to reform the pension fund with a focus on profitability and sustainability.

Before joining KDIC, Kim worked for the ministries of finance and foreign affairs and had headed various departments of the regulatory body Financial Services Commission. Press reports have not highlighted any private sector experience in the 56-year old’s career, although he is said to be “highly valued”.

He was physically blocked from entering his office on his first day of work due to a picket by trade unionists who claim he is a placeholder underqualified to deal with pension reform.

Kim faces several challenges. In the long-run, NPS’s assets are forecast to decline from 2039 and be totally depleted by 2055, according to South Korea’s National Assembly Budget Office’s estimates in 2020. Facing the prospect of receiving lower retirement benefits than their parents, younger people are pressing for the option to leave the pension programme altogether. The Yoon administration is seeking to extend the fund’s life, requiring improved yields.

However, in the short-term, NPS is faced with the impact of the global energy price crisis in the wake of the Russian invasion of Ukraine. NPS reported a loss of US$57 billion in H122, with an investment return of -8.0% - slightly better than the average of -8.7% for state-owned investors across the world, according to Global SWF’s Return Tracker. The biggest cause of its decline is its exposure to public markets with domestic equities down 19.6% and foreign equities down 12.6% in H1. 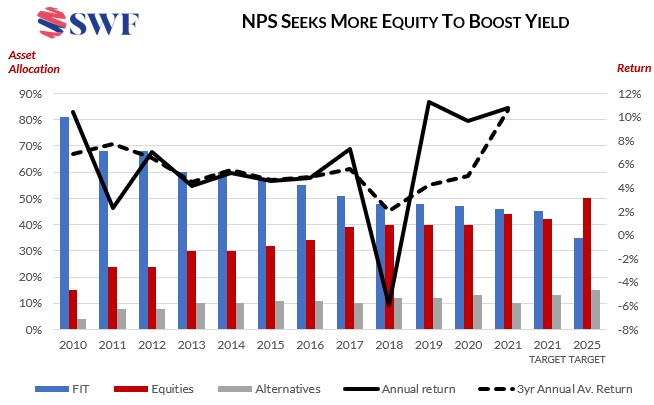 The declines are adding impetus to NPS’s drive to diversify its portfolio, with the fund aiming to raise its allocation to alternatives to 15% of AUM by 2026. Last year, total private equity and debt commitments increased by more than 38% to KRW84.6 trillion, representing 8.9% of its US$729 billion AUM at end-2021. Private debt fund allocations increased threefold to just under KRW2 trillion. In 2021, alternatives returned 24%, a rate that was exceeded only by global equity (30%).

The negative return for public equities and fixed income has helped the fund move closer to this goal in H122, but this may prove to be a short-term impact of market volatility rather than a medium-term trend. Last month, NPS announced it was committing an extra US$18 billion to private equity and debt, it has announced this week, suggesting a continued strategic tilt towards alternatives.

The fund’s ability to deploy such large sums is constrained by its own workforce limitations. NPS has been struggling with talent attraction and retention since it moved its headquarters 200km south of Seoul, frustrating its target of doubling its staffing size to 500. While in-house capabilities are being developed, NPS’s planned growth will remain heavily reliant on external managers, particularly in foreign markets.

The NPS’s diversification strategy is also not without its critics, principally domestic retail investors who are dismayed at its decision to dump stocks. Overseas markets represent over two-thirds of investments in alternatives, suggesting that domestic public equity is being liquidated in favour of foreign investments. The Korean fund aims to raise foreign holdings to 55% of its portfolio by 2025, up from 35% in 2019. Given the fund’s size, a mere 0.5 percentage point reduction in domestic stocks means around US$4 billion flowing out of Korea into foreign assets.

As Chairman, Kim has to balance conflicting generational expectations as well as risk the disapproval of the country’s trade unions and the population at large over its portfolio restructuring. At the same time, the restructuring comes in the context of global economic and political upheaval.