The US$620 billion fund announced in February that it was opening three new subsidiary offices in London, NYC and Hong Kong to “further enable PIF to continue to work with its partners across regions globally, while helping to transform global economies and drive the economic transformation of Saudi Arabia”, it said.

Global SWF’s database shows that the number of SOI offices in NYC has risen three-fold to 22 since 2010. Over the same period, offices in London more than doubled to 24 and Hong Kong also doubled, to nine. However, in terms of headcount, NYC has the edge with around 1,100 total personnel working for state-owned investors, while London hosts nearly 980 and Hong Kong has near 250. The average SOI office size is 49 in NYC, 44 in London and 28 in Hong Kong. 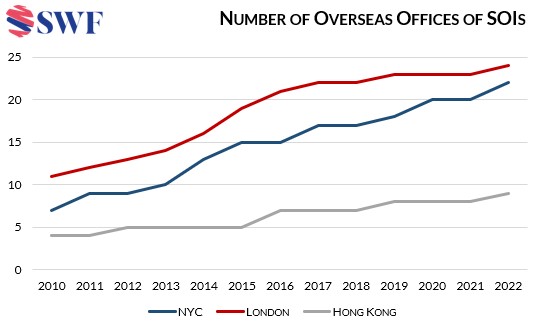 PIF is aiming for AUM of US$2 trillion by 2030 with overseas assets representing half its portfolio – and NYC has emerged as a key priority, with plans to hire 50 personnel for a new subsidiary, USSA International. Headed by its own chief of staff, the affiliate will enable the fund to establish partnerships and originate deals. According to Bloomberg, hires will cover investment research, legal and compliance, but PIF’s HQ in Riyadh will be responsible for all investment decisions, indicating a curtailment of USSA International’s autonomy.

To date, PIF’s biggest investment in the US is its US$20 billion commitment to the Blackstone Infrastructure Partners (BIP) in May 2017. It also invested US$1 billion in electric vehicle manufacturer Lucid Motors, with the value of its stake soaring following its IPO last year, although it has since declined. In total, it has US$39.9 billion holdings in public equities. Growth in investment will be channelled through

The method PIF chooses to conduct its operations in NYC indicates it may also set up subsidiary firms in London and Hong Kong, where it currently operates one-person representative offices. The choice of these locations suggests an emphasis on searching for co-investment partnerships, potentially working with other sovereign wealth funds and public pension funds with a local presence.

While USSA International will be US-focused, offices of state-owned investors in London and Hong Kong tend to be focused on regional strategy with the latter in particular a more of an outward-looking hub. PIF’s choice of Hong Kong also suggests the Chinese territory has not lost interest and was preferred over Singapore. Both jurisdictions host nine SOI offices each with total headcounts in the range of 200 to 250, but with stability and economic diversification, Singapore has caught up with Hong Kong as the Special Administrative Region has witnessed civil unrest and increased regulatory pressure from Beijing. 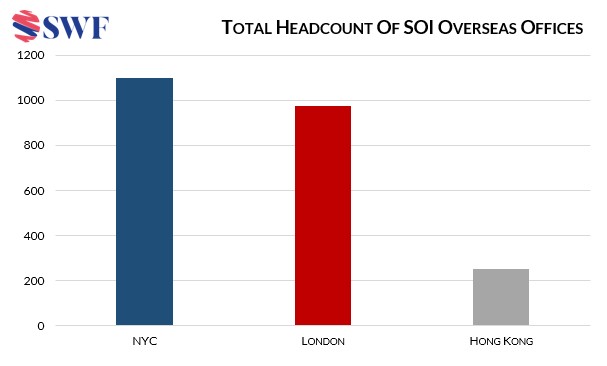