The Battle of Goliaths: Why GPIF is Outperforming NBIM in 2022

Japan’s goliath US$1.34 trillion pension fund, the Government Pension Investment Fund (GPIF), has racked up an impressive performance in the face of major challenges, with a return for Q1-Q3 of the current calendar year of -3.8% - thanks to yen depreciation, a high allocation to fixed income and the Tosho’s relatively benign performance.

The fund, which allocates 52.3% of AUM to bonds and 47.7% to equities, outperformed all its peers who have so far reported their Q3 performance. Most notably, it beat the return of the world’s other big state-owned investor, Norway’s US$1.18 trillion NBIM, which returned -18.2%.

While highly liquid like GPIF, NBIM allocates 68.6% of AUM to equities and 28.3% to fixed income with the rest in unlisted real estate and renewable energy. With a bar on domestic investments, NBIM’s performance is highly dependent on foreign public markets. In contrast, GPIF’s equities are evenly allocated to domestic and foreign markets with around 23.8% of AUM in each and its higher allocation to fixed income gave it the edge in a volatile market. 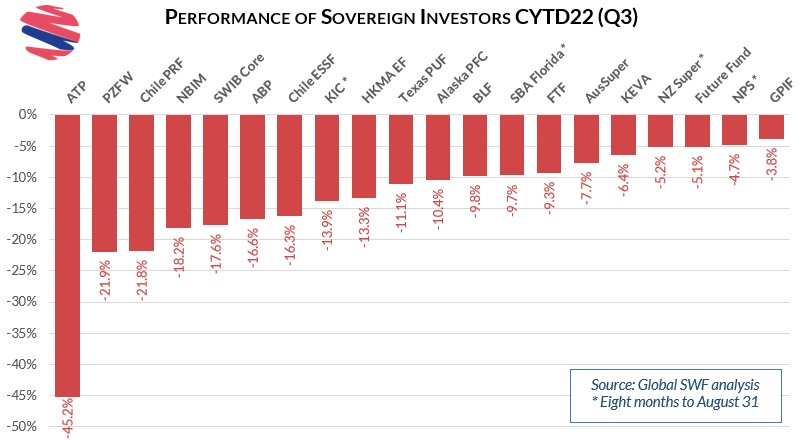 Exchange rates played a significant role in damping the effects of the global bear market on fund performance, in local currency terms. The slump in the value of the Japanese yen, which fell 25% in the January-September period, helped offset the effects of a 27% decline in the MSCI ACWI Ex Japan index, which GPIF uses as its benchmark for foreign equities. As a result, it reported a -6.3% yen return in foreign equities over the period. At the same time, Japan’s public equity market did not witness the massive rout in value seen elsewhere in the world with the Nikkei-225 down 9.9% and TOPIX down 7.9% over the nine-month period. Even so, GPIF managed a return of -5.7% in domestic equities, easily beating benchmarks.

Meanwhile, NBIM’s equities allocation shrank 6.1% with the 19% depreciation of the krone against the US dollar cushioning the impact of the slump in global equities; the benchmark FTSE All World Index saw a -26.5% return. As in the case of GPIF, depreciation ended up rescuing NBIM from a far worse result. In the January-September period, NBIM reported a total NOK1.34 trillion forex gain as well as a NOK662 billion oil revenue inflow due to the impact of soaring Brent crude prices, which together offset nearly all the NOK2.13 trillion loss from negative return.

While GPIF may have beaten NBIM in year-to-date returns, long-term performance is crucial - and in this respect, the Norwegians beat the Japanese. GPIF’s annual average gross return from inception in 2006 is 3.69%, while NBIM reports a more robust 5.56% since 1998 even though the krone has remained stronger than the yen over the long-term – reflecting the long-term superior performance of public equities over fixed income. 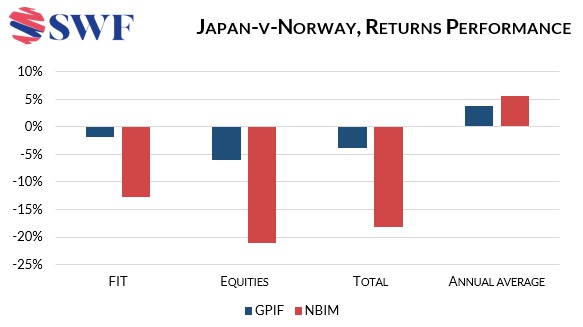