The $6bn Private Equity Sale: What is CalPERS Up To?

The US$456 billion California Public Employees' Retirement System made a dramatic decision this month by selling a huge slice of its private equity portfolio at a discount and cutting ties with external managers, despite its previously stated objective to raise its allocation to the asset class.

The sale of US$6 billion of assets represents a whopping 11% of its US$53.5 billion private equity portfolio – although the sales have been staggered, so some will transfer in the next financial year (after June 30) in order to cushion the blow on the current year’s performance. According to Bloomberg’s sources, the holdings were sold at a 10% discount compared to their September 2021 value, implying the portfolio lost US$650 million of its value. Since the beginning of the year, CalPERS has lost US$34 billion in value – a decline of around 7% - as the impact of the Ukraine crisis rocked markets.

The decision puzzled many observers given that in November the Board of Administration confirmed a new investment strategy for the next four and a half years, which bringing the level of private equity back to 2011 levels, at 13% of the total portfolio. The fund’s investment managers have argued for the past few years that this is a necessary move if CalPERS wants its assets to catch up with the liabilities. This was precisely the investment thesis of former CIO Yu Ben Meng (more assets and better assets), who exited the fund in August 2020.  Considering the projected growth in AuM, this figure would need to double in less than four years, requiring an additional US$11 billion in investments per year. 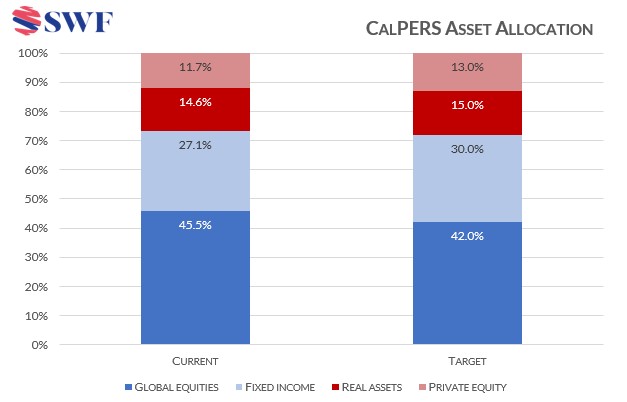 The new CIO Nicole Musicco is seeking more deal origination by the fund’s own teams rather than rely on external managers, to gain greater control. The US$6 billion in cash should give her plenty of funds to play with, but with that comes the need to bolster internal human resources. While the sale discount might seem steep, pundits have suggested the opportunity cost would have been more pronounced if CalPERS had held on, leaving the portfolio to continue to depreciate in value and leading to higher discounts in the medium-term. The fund’s new asset allocation target is 42% in global equity (45.5% currently), 30% in fixed income (27.1%), 15% in real assets (14.6%), 13% in private equity (11.7%) with 5% leverage (0%).

Canadian national Nicole Musicco joined the fund in February from the US$5 billion RedBird Capital Partners where she was head of its Canadian business. Previously, she managed the private markets portfolio of the Investment Management Corporation of Ontario (IMCO) from 2018 to 2019 and previously worked for the Ontario Teachers’ Pension Plan (OTPP), leading both private and public equity teams.

The Canadian experience is particularly important for US state-level PPFs like CalPERS, which overall suffer a far worse funded ratio than Canadian PPFs. Global SWF research found that the US average ratio is 75% with a US$1.3 trillion total shortfall across the PPF sector. Most Canadian pension plans are fully funded, with a 105% national average. CalPERS’ assets have been increasing at an average pace of 7% for the past 10 years, but the road to 100% levels (aka Canadian levels) will be certainly longer and harder.

Improved origination through internal teams means a hiring spree and we expect CalPERS to beef up its private equity teams in coming months as it seeks to redeploy cash from secondary markets as well as the leverage it plans to take on to drive forward an aggressive private market strategy.