Temasek’s voracious appetite for venture capital shows no let-up and 2021 looks set to be another record-breaker.

Global SWF’s historical data has charted an increase in the volume and total value of VC deals and shows that the Singaporean state-owned investor is increasingly focused on earlier funding rounds. Series A to C rounds have gone from 36% of total VC investment in 2019 to 69% in the year to date. At the same time, the volume of deals is accelerating with a strong focus on disruptive tech, particularly e-commerce, fintech, and biotech and life sciences. The pandemic has merely deepened its desire to capitalize on trends that are boosted by the crisis. 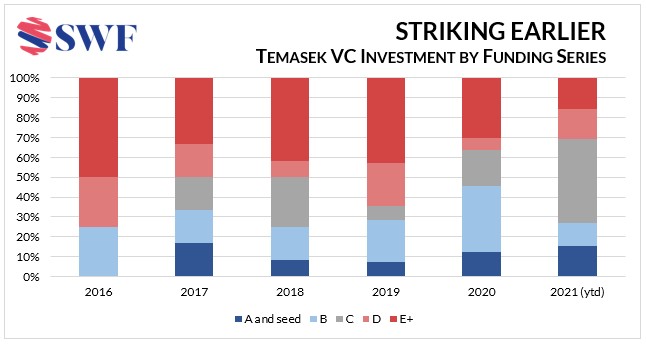 Backing Market Disruption in a Crisis

Among SOIs, Temasek is the leader in investment in innovation, deploying US$2.3 billion into disruptive tech-related sectors in 2020, particularly in e-commerce and life sciences, according to Global SWF data. VC targets ranged from Chinese EdTech startup Yuanfudao with 400 million users to German biotech company BioNTech which subsequently developed the world-leading Covid-19 vaccine.

With an eye on the needs of the densely populated city state, Temasek extended its portfolio into urban farming by forging a JV with Leaps by Bayer and in Israel’s Rivulis Irrigation. This year has seen the same pace and profile of VC investment, from seed funding in Singaporean plant-based food startup NextGen to late stage investment in US-based cloud app security firm Snyk.

While VC remains a small slice of the US$215 billion fund’s overall assets under management, allocations provide Temasek with exposure to market disruptors with high growth potential.

Having carved out a well-crafted strategy in tech venture capital in recent years, Temasek is likely to ride high on the expected IPO surge - notwithstanding the stalled Ant offering. Recent IPOs of Temasek-backed companies include Kuaishou which has soared above its February IPO valuation, doubling the value of the Singaporean SOI's investment within the space of a year. Temasek was also a VC backer of “pandemic winner” DoorDash, which also saw its value soar after going public.

Temasek stands to receive a boost from its slice in VC targets as it rides on a wave of IPOs. These include stakes in Singaporean ride-hailing app Grab (which is cited as having a potential US$40 billion valuation at IPO), British life sciences company Oxford Nanopore (US$3.44 billion) and US payments firm FlyWire (US$3 billion).

In Indonesia, a merger of Indonesia's ride-hailing and payments firm Gojek and e-commerce leader Tokopedia – both of which have won Temasek’s backing - will create a regional tech giant with a potential value of US$2 billion.

Temasek’s chief focus of interest is China, which represents a larger share of its portfolio than domestic holdings. There its VC strategy is set to yield significant gains. It was an early backer of Didi Dache, which post-merger became part of Didi Chuxing which is expecting a blockbuster US$100 billion valuation.

Nevertheless, there are significant risks alongside the potential rewards, especially when engaged in venture capital investment in loss-making startups with big ticket valuations. The number and size of funding rounds have yielded massive capital injection, which has in some cases diluted stakes – and if private equity funding rounds or IPOs don’t match expectations, there is a danger that asset values come under attrition.

Temasek has already had its fingers burnt with Indian ride-hailing app Ola, with its stake diluted as it has opted out of funding rounds. The app’s value has fallen from over US$4 billion when Temasek invested US$225 million in Q3 2018 to US$3 billion in a Q1 2021 estimate, amid the attrition of the pandemic.