Temasek's US Equities Slashed by US$5.8bn in Q3 with Declines in Financial and Retail Stockholdings

Temasek’s US equities portfolio fell US$5.8 billion over Q3 to US$28.6 billion, due to a reduction in the value of its positions in financial services and retail & consumer sectors. Yet, its portfolio is still large in historical terms. In the 12 months to end-September, Temasek’s US equities have grown US$8.9 billion – an increase of 45%.

Global SWF’s analysis finds that while Singaporean state-owned investor increased its positions in tech and healthcare stocks by US$163 million and US$375 million respectively, its positions in financial services fell by US$4.5billion and R&C stocks declined US$1.6 billion. There was also a more modest reduction in energy & natural resources of US$186 million.

Temasek participated in the IPO of digital lending platform Blend Labs, securing a holding of US$160 million by end Q3. The IPO of language app Duolingo also gained the Singaporean sovereign investor’s interest, with US$50 million spent on its stock. Temasek was a major backer of diagnostics developer Cue Health’s public listing with a shareholding valued at US$37 million in a US$200 million offering. Following its demerger from Prudential, Jackson Financial received US$26 million of Temasek capital. 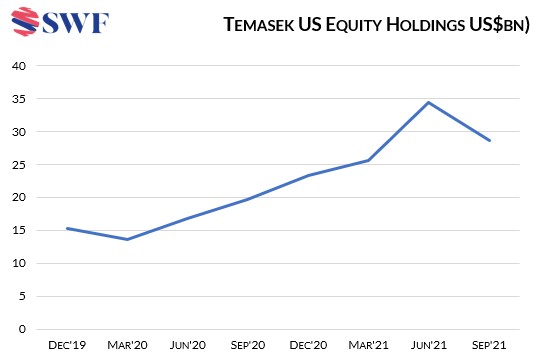 Temasek’s new positions also include E2Open and Poshmark, which listed on the NYSE in Q1. Additionally, it invested in three ETFs: US$242 million in IShares US Dollar Investment Grade ETF and a total of US$61 million in two Blackrock-managed ETFs focused on carbon transition readiness.

In terms of exits, there was a clear move to limit its exposure to China's tech clampdown with exits in Baidu, Kanzhun, TAL Education and New Oriental as well as cutting its stakes in Alibaba and Didi Global. The Singaporean investor was burned by the unexpected move by Beijing against Big Tech and has cut its losses and run.

Compared to end-September 2020, Temasek has increased the value of TMT stocks in its equity portfolio by 8 percentage points and healthcare by 2pp, while R&C has declined 6pp, Energy & Natural resources by 2pp, and listed infrastructure by 1pp.