Temasek is establishing a suite of its own in-house startups that are bolstering Singapore’s tech ecosystem and point to a new strategy that will be keenly studied by other state-owned investors (SOIs).

In August, the Singaporean investor launched Aicadium, an AI tech and solutions operation based in Singapore and San Diego, California. The company is set up to support business outcomes for Temasek’s portfolio companies through achieving operational artificial intelligence within their organizations. This week it announced the acquisition of BasisAI, a Singapore-based provider of scalable AI software. After receiving US$6 million in seed funding from Temasek and Sequoia India in 2019, the firm launched its proprietary end-to-end machine learning platform, Bedrock, which enables organisations to rapidly deploy responsible AI solutions. The acquisition of BasisAI indicates that Aicadium will not focus solely on firms in the Temasek ecosystem, but has plans for growth on the global market place.

Michael Zeller, Head of AI Strategy & Solutions at Temasek, said: “Together, the new entity will further Temasek’s strategy of deploying capital to catalyse innovative and transformational technologies, such as AI, to enhance businesses and build a more inclusive, resilient world.”

This year, Temasek has so far deployed more capital into the city-state’s tech sectors than in any previous full-year. The strategy chimes with the Singaporean governments bid to boost sectors like e-commerce and food tech. The US$283 billion investor is always on the lookout for the next big thing emerging from Singapore’s entrepreneurial milieu, including: seed funding in Singaporean plant-based food startup NextGen; backing Big Ideas Ventures’ New Protein Fund 1 as it strives to develop alternatives to meat; and a joint venture deal with Nanofilm Technologies to create Sydrogen Energy, which will market parts used in the production of fuel cells and electrolyser systems in hydrogen production. 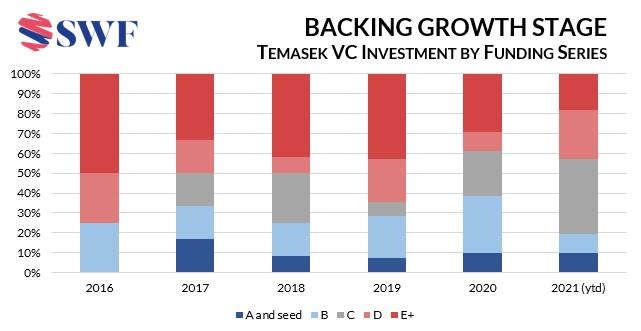 The Singaporean investor is a voracious venture capital investor and its appetite is growing ever stronger. In the year-to-date, Temasek’s investment in VC rounds is estimated at approximately US$4 billion, up nearly 75% from the whole of 2020. The number of VC transactions is in excess of 70 – more than double the level seen in 2020. The US is its biggest target for VC, comprising 32% of its volume of investments, followed by China (21%), India (15%) and Singapore (13%) – excluding its in-house startups.

In-house startups demonstrate Temasek’s desire to invest at an early stage in order to realise maximum potential asset growth. So far this year, 10% of the SOI’s VC deals have been in seed and Series A rounds, unchanged from 2020. The proportion of Series B investments has reduced, while C and D have increased. However, the level of late stage investments has reduced, indicating growth preference for growth stage investment.

While VC is seen as high risk, the level of VC investment is still only a small portion of the total portfolio. As one of the pioneering VC investors in the SOI sector, Temasek has demonstrated it is assiduous in its VC decisions and, despite some setbacks, has backed winners.