State Investors' Portfolios Are Pummeled By Geopolitics, But It's Not All Bad News

Global SWF has taken stock of portfolio losses in local currency terms and finds that the value of state owned investors' AUM has taken a hammering since Russia’s military action in Ukraine with hundreds of billions of US dollars wiped off their portfolios - yet, there is still a chink of light in the gloom.

The biggest losses in terms of the rate of change in portfolio value is unsurprisingly Russia’s National Wealth Fund (NWF), which saw its value in roubles fall 15.1% or RUB28 billion from the beginning of the year to the end of April. As Global SWF reported last month, the fund’s liquid assets overall shrank as the government tapped the fund for pensions payouts. NWF’s stake in Sberbank has plummeted, as has the value of its Aeroflot stake. Additionally, the fund is under pressure to invest RUB1 trillion in Russian stocks to prop up the Moscow stock exchange. 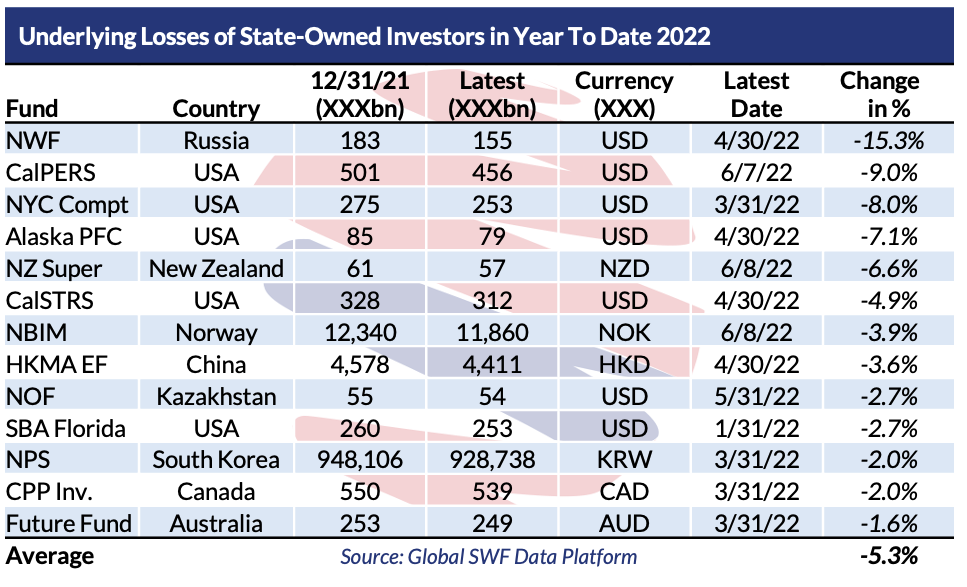 More shocking is the result of the California Public Employees' Retirement System (CalPERS) up to June 7th – it has seen US$45 billion wiped off its portfolio value. In contrast, Norges Bank Investment Management (NBIM), which oversees Norway’s giant US$1.3 trillion Government Pension Fund Global (GPFG), reported a 3.9% change in portfolio value. Given that its assets are entirely in foreign currencies, particularly the US dollar, the fund’s krone value has held up as it is highly levered to the oil market which is seeing surging oil prices.

With figures reported in different currencies and at different times over the past five months, it is not possible to compare apples with apples. There does not appear to be a neat correlation between strategic asset allocation and alternatives allocation.

Yet, despite all the gathering dark clouds, there are silver linings to be found. Compared to benchmarks, most funds appear to be delivering alpha. CalPERS’s 9% reduction in its AUM in the year to June 7th compares favorably to S&P Global 1200, which has shrunk 12.4% in the year-to-date; public equity makes up more than half its portfolio.

If we take a benchmark portfolio of 60% public equity and 40% fixed income, we would expect the value of the portfolio to decline by 12.5% over the first four months of 2022, based on the S&P 550 Bond Index and S&P Global 1200 Index. Yet, four funds reporting at end-April did a lot better – or less bad – than that with declines in local currency ranging from 3.7% for the Hong Kong Monetary Authority’s Exchange Fund to 6.6% for Alaska Permanent.

So, while the losses appear eye-watering, state-owned investors appear to be beating benchmarks on behalf of their stakeholders – regardless of their portfolio mix.