Stock exchange filings by state-owned investors, published this week, saw a divergence in strategy and positions in Q4 2021, with leaps in some portfolios slightly offset by downward adjustments in others.

Saudi Arabia’s Public Investment Fund (PIF) again saw its portfolio boosted by its massive stake in Lucid Motors. The electric vehicle manufacturer saw its stock price surge 55% over the final quarter, accounting for much of the US$13 billion increase in PIF’s US equities portfolio to US$55.9 billion. At the same time, PIF made little, if any, movement in its stock-holdings, retaining roughly the same stakes as it did in the previous quarter, indicating the Saudi fund had passed the period of unpredictable investment activity. With the fund’s AUM estimated at US$460 billion at end-2021, US public markets represented 12% of its portfolio.

The Korea Investment Corporation (KIC) also had a significant quarter with a 15% q-o-q increase in its portfolio to US$38.5 billion – a rise of 21% y-o-y. As a result, US public markets represented around 19% of AUM. In its hunt for yield, the Korean sovereign wealth fund has reduced allocations to fixed income into public equities since 2017 from 34% of AUM to 43% by end-2020. US equities have proven to be a favorite target for the US$201 billion investor as it diversifies geographically and reduces weight in low-yield bonds. 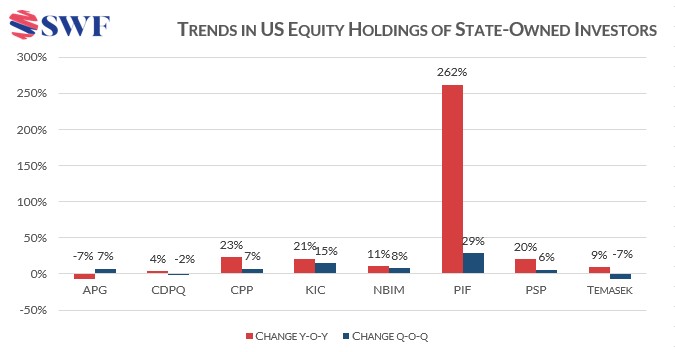 Another Asian heavyweight state-owned investor, Singapore’s Temasek, had a 10% allocation to US equities and saw a lower level of growth in its portfolio – up 9% y-o-y to US$27.7 billion, but down 7%. The investor made a significant moves in the market, dropping US$1.6 billion investment in Chinese e-commerce platform Alibaba and US$1.0 billion in online payments provider PayPal – responding to declines in their stock values of 18% and 26% across the quarter, respectively.

Meanwhile, Norwegian behemoth the US$1.2 trillion Government Pension Fund Global, managed by Norges Bank, saw a more modest 11% y-o-y growth in its portfolio to US$486.4 billion, which was 8% up q-o-q and representing 35% of AUM. The fund is relatively conservative in its asset allocation with no significant strategic moves in the market, essentially acting as a giant index tracker.

Canadian public pension fund CPP Investments witnessed a 23% jump in the size of its US public equity portfolio from end-2020 to US$94.1 billion – a 7% rise over the previous quarter – to represent 22% of AUM. CPP Investments had a total public equity portfolio of US$153 billion at end-December, indicating the US represented around 61% of allocation, up from 56% at the end of its last financial year, ending March 31.

Other Canadian public pension funds saw varying differences with PSP Investments seeing 20% y-o-y growth in its US equities (up 6% q-o-q) to US$18.6 billion (11% of AUM), while CDPQ’s allocation has grown just 4% y-o-y (down 2% q-o-q) as it seeks to reduce its exposure to US public markets (15% of AUM). Dutch PPF APG also appears to be reducing exposure to US equities, which declined 7% y-o-y to US$77.6 billion – although the portfolio grew 7% in value compared to the previous quarter. 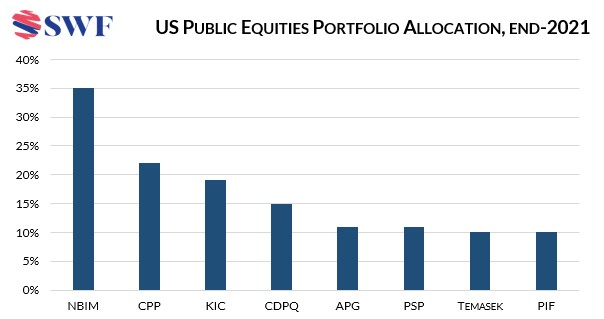