Global SWF examined the relationship between fiscal year returns and asset allocation for funds reporting at end-March and end-June. We found that there was a strongly positive correlation coefficient between annual returns and allocations to fixed income (0.33) and public markets (0.16), but a negative relationship with private markets (-0.40), which include private equity, real estate and infrastructure.

This meant that the more funds allocated to fixed income and public equities, the higher their annual return was likely to be. Conversely, funds with higher allocations to private equity had lower yield. For example, NYSCRF reported a robust annual return of 33.6% on a portfolio that started the fiscal year with a 47% allocation to public equities, compared to PSP Investments with an 18.4% return with a 26% allocation. Both public pension funds’ fiscal years ended at end-March and they have similar allocations to fixed income and treasury (FIT).

The figures will not come as a surprise to market watchers. Public markets have seen a surge in stock values from the dip of the darkest days of the pandemic, while some private equity segments have seen disappointing returns. Yet, the correlation was not always neat and is also influenced by the impact of exchange rates on foreign assets, which could explain the reason why, by and large, US funds have reported better returns than Canadian and Australian peers. In the fiscal year ending end-March when Canadian funds in the sample reported their return, the C$ strengthened from close to US$0.70 to US$0.79, while the A$ increased from US$0.69 to US$0.75 at end-June when Australian funds reported, representing domestic exchange rate appreciation of 13% and 9%, respectively. 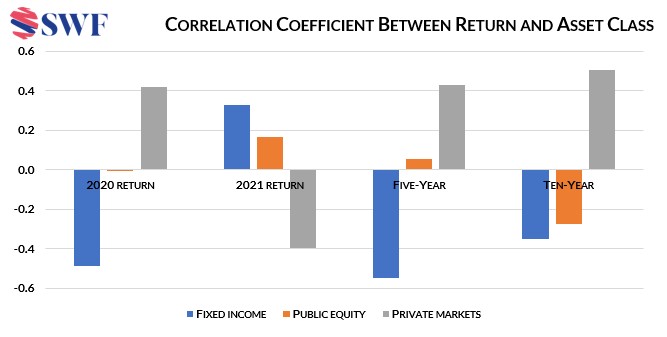 Is the tilt towards alternatives a mistake? Historical analysis reduces the impact of short-term currency fluctuations and gives a greater insight into long-term yield. Our analysis of five- and 10-year returns in the same sample of funds suggests that private markets have proven to be important generators of long-term yield. For state-owned investors – particularly those with savings and pension mandates, which form the bulk of funds reporting returns at end-March and end-June – this is particularly important.

The correlation coefficient for private markets was 0.43 and 0.50 over five- and 10-year periods, while for fixed income it was -0.55 and -0.35 and for public markets it was 0.06 and -0.27, respectively. Higher allocations to private markets equate to higher long-term yield. The fund with the lowest exposure to private markets, Japan’s massive pension fund GPIF, had the lowest average annual rate of return over five- and 10-year periods at 6.9% and 3.8% respectively, while the fund with the highest exposure, CPP Investments, rates of growth at the high end at 11.0% and 10.1%.

Are private markets experiencing a correction following an asset price bubble? State-owned investors don’t seem to have lost confidence, particularly in venture capital which is witnessing a surge of interest. So far this year, SOIs have invested US$59 billion in private equity (compared to US$67 billion for the full year in 2020), US$34 billion in real estate (US$33 billion: 2020) and US$45 billion in infrastructure (US$55 billion: 2020), making total private market investments of US$138 billion (US$155 billion). Trends point to a record year of private market investments in 2021.

Even more significant is the surge in allocation to venture capital. In the year to date, SOIs have invested US$13.2 billion in VC – far greater than the US$9.5 billion invested in the whole of 2020 – while the number of VC investments has risen from 120 to 223. They are going in at an earlier stage with their eye on long-term trends in the tech sectors set to benefit from the post-Covid scenario, while they are raking in gains from past private equity investment at IPO stage where values are soaring. At the same time, recovering property prices and growth in logistics property and renewable energy opportunities are encouraging SOIs to make a shift back into real estate and infrastructure.

While public equity provided a welcome lift in portfolios and FIT gave some stability, SOIs are becoming savvier in private market origination and at the same time more confident they can minimize downside risks. With funds expanding their private equity teams and bumping up their VC exposure, they clearly see private markets offering long-term yield – although public equity and FIT will continue to have their place, particularly in the context of total portfolio management.

Funds included in our analysis are: