Sovereign investment in Australian real assets is soaring to new heights with US$9 billion spent on real estate and more than US$6 billion deployed into infrastructure – and this month is seeing the pace of investment continue.

From 2016, a total of US$31.6 billion of capital has been invested in infrastructure by state-owned investors, of which 58% has come from foreign sovereign wealth funds and public pension funds. Over the same period, US$25.8 billion was invested in real estate by SOIs, of which 78% was foreign investment. Yet, there has been a structural change in SOI investment in Australian real estate with a focus sectors benefitting from the pandemic.

With growth in investment, foreign SOIs are establishing operations in Australia. In May, Singaporean sovereign wealth fund GIC revealed it was set to join four other foreign state-owned investors in setting up an office in Sydney, Australia. The office, which will be the fund’s 11th worldwide, will be established in 2022. Other funds with offices established in the city are all Canadian public pension funds: CDPQ, CPP, OMERS and OPTrust.

Interest in logistics real estate has accelerated with the onset of the Covid-19 pandemic, stimulated by consumption-oriented supply chains, urbanization, digitalization and demographic trends. Retail is being transformed by technology, supported by the growth of e-commerce and the expectation of faster turnaround times in delivery. Logistics retail estate is central to the development of decentralized supply networks that are crucial to consumer market evolution – and state-owned investors are deploying billions of capital into the sector.  However, Australia has a lack of bespoke industrial property for operators seeking customised, modern facilities with good connectivity to industrial hubs, such as Sydney and Perth.

This month has seen AustralianSuper team up with a consortium led by Logos and backed by the Abu Dhabi Investment Authority (ADIA) to acquire industrial and logistics land near Sydney Airport for an estimated US$603 million. The investment follows a trend begun last year when state-owned investors began enthusiastically snapping up Australian logistics assets in co-investments, mostly with Logos and ESR.

GIC is planning to invest an estimated US$2.5 billion in its Australia Logistics Partnership with ESR and Abu Dhabi’s Mubadala is backing a three-way joint venture with LOGOS and KKR. In a  A$1.67 billion transaction announced in July, AustralianSuper became the leading investor in a consortium that acquired Australia’s largest intermodal freight facility the Mooreback Logistics Park, with other investors including AXA, Canadian public pension fund CDPQ and New South Wales state-owned investor TCorp.

SOIs have sustained their interest in the Australian office market, regardless of the impact of the pandemic on work patterns that prompted an increase in working from home. A total of US$1.18 billion has been invested so far this year in the sector, compared to US$1.60 billion in 2020 – although this level is still far lower than the peak in 2019 when acquisitions reached US$4.46 billion. This year has seen investments in Melbourne, Perth and Canberra, with the biggest transaction being Korean public pension fund NPS’s purchase of an office tower currently under construction in One Melbourne Quarter. Due for completion in 2024, the US$900 million tower promises to mark the start of the fund’s deepening exposure to Australian real estate.

Residential property is also gaining favor. In February, Dutch public pension fund manager APG and Ivanhoé Cambridge, the real estate arm of Canada’s CDPQ, backed Australia’s biggest ever build-to-rent real estate fund. Greystar’s US$1 billion Australia Multifamily Venture I fund was seeded with two BTR projects set to start up in Melbourne this year, which will develop at least 1,300 rental homes. The long-term objective is to exceed 5,000 homes. Currently at a nascent stage, the sector is set to grow fast over coming years, assisted by changes to the land treatment tax. 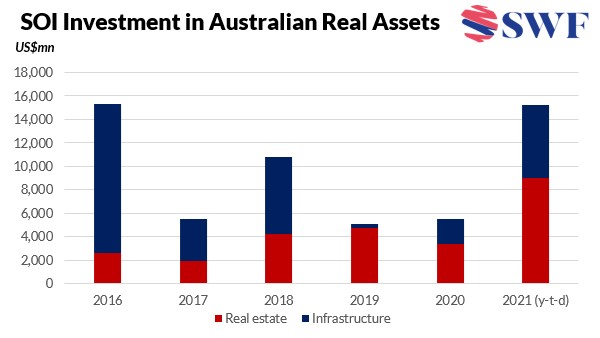 Australia's energy and utilities infrastructure network is mature, but there are opportunities for growth, particularly in the fast-growing renewable energy segment. The country is expected to gradually phase out coal-fired thermal electricity generation in favor of renewables, with wind and solar power leading growth. Improvements in transmission and distribution infrastructure and battery storage capacity will also feature prominently in the infrastructure growth story. The pressure is on to improve electricity grid infrastructure to support the rise of electric vehicles, among other new electricity demands from households.

October saw a breakthrough in SOI investment in Australian infrastructure with Canadian public pension fund OMERS acquiring a 49% stake in the Australian unit of Spain-based Fotowatio Renewable Ventures (FRV). The renewable energy platform includes 637MW of solar capacity in operation and under construction with a development pipeline of 2.7GW of solar generation projects alongside battery storage systems.

SOIs are also playing a crucial role in providing capital to help Australia adapt to renewables.  Canadian public pension funds (PPFs) are leading the charge in the electricity utility space, having also boosted their exposure to the country’s real estate sector.

AustralianSuper is looking to sell a 16% stake in New South Wales’ biggest electricity distribution company, Ausgrid, estimated to be worth more than A$2 billion. A shortlist was drawn up earlier this month with Macquarie’s MIRA, Dutch fund APG and a consortium of KKR and Canadian pension fund Ontario Teachers’ Pension Plan (OTPP) understood to have made it into the second round. AustralianSuper would be left with a direct and indirect stake of little more than 10%, just five years after it acquired a 50.4% stake alongside IFM for A$16 billion. The PPF is looking to rebalance its portfolio towards foreign investment as it seeks to meet ambitious targets.

Canada’s OMERS has already secured a strong foothold in NSW’s electricity infrastructure with a 20% stake in power transmission company Transgrid from KIA’s infrastructure arm Wren House; other investors in the company include CDPQ (25%) and ADIA (20%).

In August, Spark Infrastructure Group agreed to let Canada’s PSP Investments join a consortium including OTPP and KKR that was looking to buy the Australian electricity infrastructure investor. In the previous month, the consortium offered A$5.1 billion (US$3.8 billion) and due diligence is underway. PSP is expected to provide one-third of the total funding required for the acquisition. Spark’s assets include a 15% stake in Transgrid, Boman Solar Farm (100MW in operation and a 2.2GW development portfolio), 49% of South Australian electricity distributor SA Power Networks and 49% of Victoria distributors Citipower and Powercor

Although SOI excitement has focused on Australia’s energy transition, there is still appetite for road infrastructure. This was demonstrated in September when Transurban announced that it would acquire the remaining 49% in WestConnex along with a group of State-Owned Investors including AustralianSuper, ADIA, CPP and CDPQ. The NSW Government expects to receive US$ 8 billion for the privatization, which will use to keep fueling NGF’s growth. In parallel, TCorp announced that it would internalize AMP Capital’s mandate to manage in-house some of its infrastructure assets including a South Australian ports group and a Melbourne toll road. Given the increasing flow of capital from depositors, the organization will need to grow in sophistication and personnel as signaled by the vacancies announced on its website.