The Abu Dhabi Investment Authority (ADIA) and Australia’s healthcare sector superannuation fund HESTA have joined a consortium led by US private equity firm KKR that is seeking to buy Australia-based global hospital operator Ramsay Health Care for A$20 billion (US$15 billion) - a move that proves Australia is an enduring attraction for both domestic and foreign state-owned investors (SOIs).

KKR has offered A$88 per share to take the company private, a 4% premium over the level at close of trading on Friday. After it announced the bid on Wednesday, the share price surged by more than 30%. The enterprise value of the deal is A$28 billion and if the consortium succeeds, it will mark the biggest ever private buyout of an Australian company and the biggest deal so far this year in Australia, according to Reuters.

ADIA has not commented on Bloomberg’s report that it had joined the consortium, but HESTA issued a public statement declaring its involvement. HESTA CEO Debby Blakey said, "We believe this investment has the potential to have a positive impact on patient health and wellbeing in Australia and abroad whilst helping to generate strong returns for our members.”

Almost a third of the Fund’s more than 900,000 members work directly in healthcare. Its portfolio includes investments in social infrastructure, early-stage biomedical development and software and digital services providers. As such, the acquisition aligns closely with existing investments as well as healthcare-centered culture of its members.

Ramsay Health Care’s global network extends across 10 countries, with over eight million admissions/patient visits to its facilities in over 532 locations. It has 72 private hospitals and day surgery units in Australia and is Australia’s largest private hospital operator. Ramsay operates hospitals and clinics across 10 countries in three continents, with a network of more than 530 locations. Via its 52.5% share of Ramsay Santé, it is the second largest private care provider in Europe, operating specialist clinics and primary care units in approximately 350 locations across five countries in Europe. 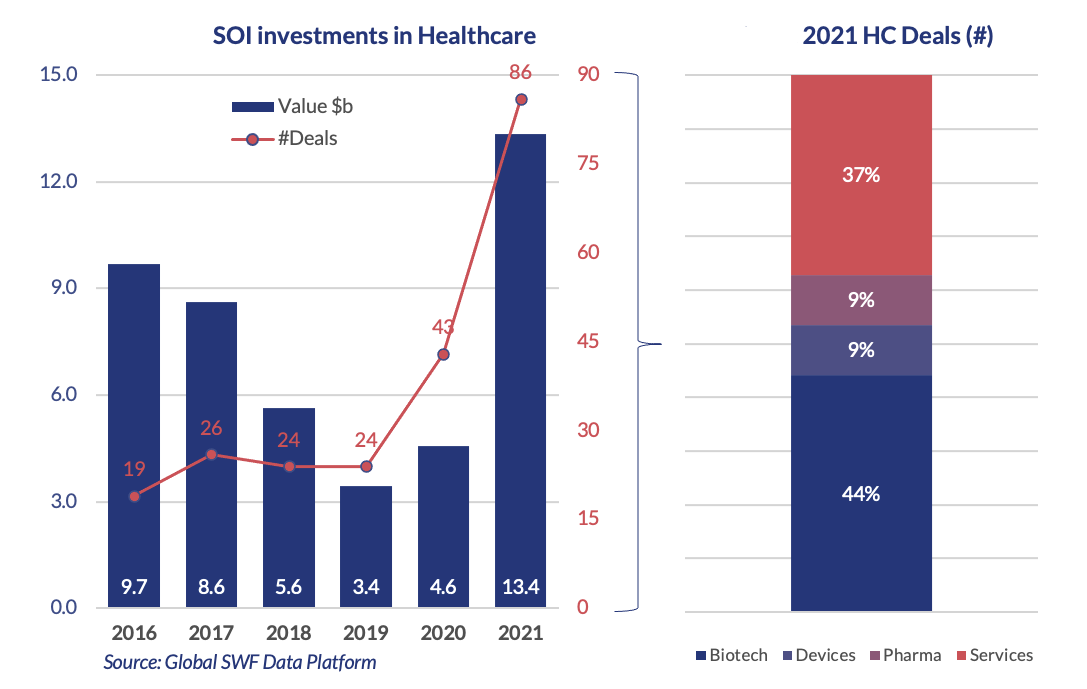 In Global SWF’s 2022 Annual Report, Australia and healthcare were identified as key investment themes in the coming year. In 2021, investment in Australia by sovereign investors reached new heights as US$23.8 billion was poured into real estate, infrastructure assets and private equities. Global SWF believes the trend will persist as the government drives forward its infrastructure program, capitalizing on the country's geographical and resource strengths to play a leading role in regional economic integration.

So far this year, we estimate SOI investment totalling more than US$17 billion with the completion of the take-over of Sydney airport, involving home-grown funds UniSuper, Australian Retirement Trust (ART) and AustralianSuper, standing out as the biggest deal. This was followed by the acquisition of energy supplier AusNet by a clutch of Canadian pension funds (AIMCO, IMCO, HOOPP, PSP) along with ART.

Overall, the strategy followed by SOIs this year has focused on real assets as well as agriculture and food. The buyout of Ramsay Health indicates that SOIs are looking beyond chunky infrastructure acquisitions, which provide some measure of inflation hedge, to other segments.

Indeed, healthcare is often used as a hedge against uncertainty, as the sector has proven to be resilient and a strong performer even during times of economic crisis. For sovereign investors, it is a defensive growth sector that can ride out shocks and uncertainties – simply because it is an essential service.

Global SWF data shows that the value of SOI investments in healthcare almost tripled to US$13.4 billion in 2021. So far this year, private equity investment in healthcare has exceeded US$3 billion and the success of the Ramsay Health transaction could significantly boost this figure. The large bulk of deal volume has been in venture capital with a focus on biotech startups, but high value deals are dominated by treatment centers and hospitals, including veterinary care.

Sovereign investors showed interest in patient care and healthcare services, which are typically mature assets. Acquiring hospitals and clinics as well as ancillary products and services enables investors to respond to long-term trends: ageing societies in the developed world and rapidly growing middle-classes in emerging markets.