Sovereign Investors have different degrees of exposure to Russia and to the Commonwealth of Independent States (CIS). On the one hand, Middle Eastern funds have been increasing their allocation into the region for the past few years, and Asian countries continue to be some of Russia’s most important trading partners. On the other hand, European and, especially, North American, pensions had already been divesting positions due to geopolitical risk. Global SWF estimates that foreign SOIs hold US$ 41 billion in Russian investments, a 0.13% of their capital.

Since the beginning of the attacks, the pressure has ramped up and some SOIs have quickly announced their exit of any Russian investment, including Norway’s NBIM, Canada’s CDPQ and Australia's NSW Generations Fund. The move does not only respond to domestic demands from civil society, but also tries to minimize losses due to the imminent sanctions. But, can they really sell the distressed assets now? Even if they could, can they justify that this is a commercially-driven decision without the interference of their politicians? What will happen with the US$ 832 billion held in Russian foreign reserves and SWFs? 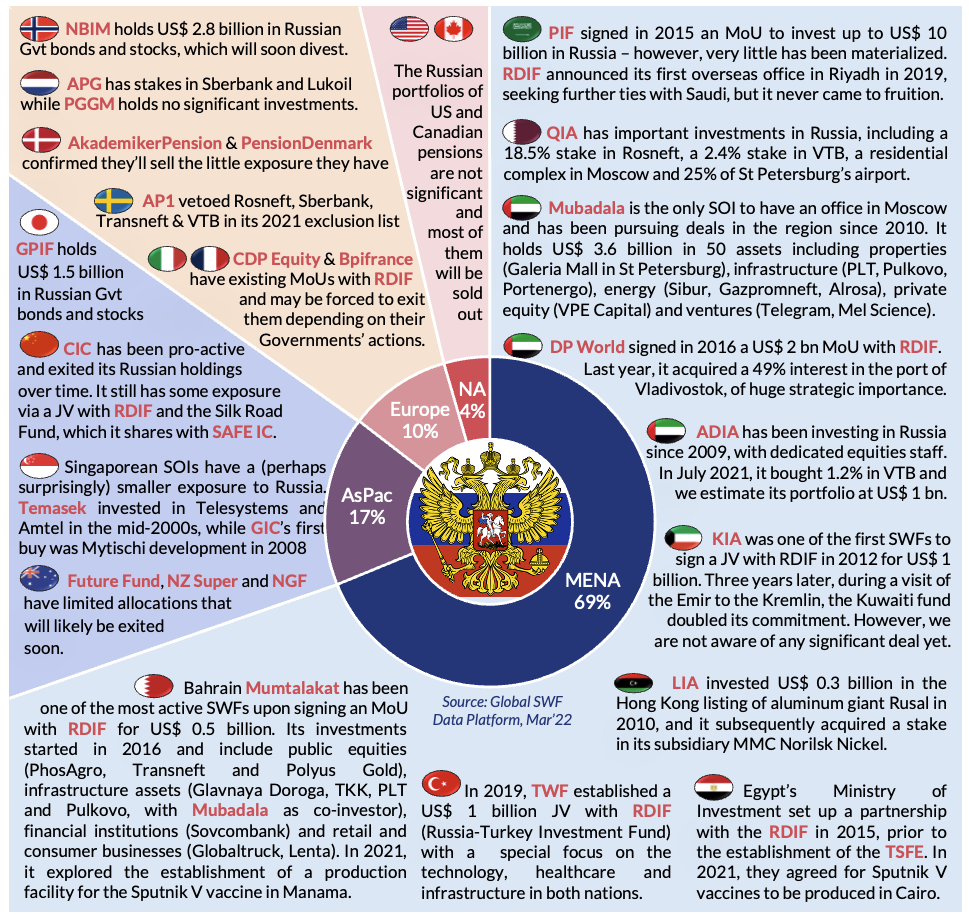 On the capital markets side, most of the exposure comes via Gvt Bonds and stakes in major conglomerates, namely Gazprom, Rosneft and Lukoil (O&G), Alrosa and Polyus (Mining), and VTB and Sberbank (Financials). On average, the seven most popular stocks among SOIs lost 63% in value between February 15 and February 28.

Gulf funds go beyond bonds and stocks though, and have been increasing their CIS interests in recent years. Take Mubadala, which first invested in Russia in 2010 with US$ 100 million in a fund run by Verno Capital. Three years later, it created a US$ 2 billion JV with RDIF to source opportunities. And in 2017, it bought out Verno to establish its own team in Moscow, reducing its dependency to local partners. Today, its CIS program has deployed US$ 3.6 billion in about 50 investments.

Others have preferred chunkier acquisitions. A few years after setting up a JV with RDIF and buying a residential community in Moscow and 25% of St Petersburg’s airport, Qatar’s QIA spent US$ 11 billion in 18.5% of energy giant Rosneft. The stake went from a US$  13.5 billion peak in Nov-21, to US$ 4.9 billion today.

Chinese funds including CIC and SAFE have also committed important sums to Russia. In 2012-2013, CIC bought significant stakes in the Moscow Stock Exchange, Uralkali and Polyus Gold. However, it sold all three companies by 2016, some at a significant discount, because of Russia’s deteriorating economic situation.

As per the Russian outbound capital, this will be largely affected by sanctions at three different levels:

The events are still unfolding and it is unclear how long and deep the financial effects will be. Some investors are opting for “freezing” their Russian assets until they can work out a favorable exit, while others will likely hold on to their portfolios, which are considered strategic in their relationships with Moscow. In any case, this has just started and State-Owned Investors will have to prove, once again, how resilient their portfolios are. 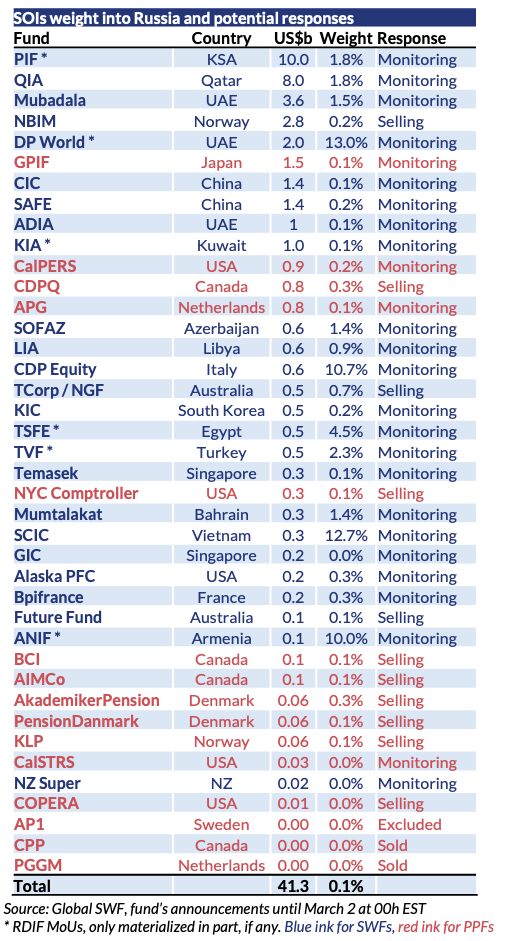