Geopolitical risks to energy markets is set to drive state-owned investors allocations to European renewables projects, helping to accelerate the impetus towards net zero. Recent days saw a renewed impetus by the EU to use green energy to ween itself from Russian oil and gas, while two of the world's biggest public pension funds have conducted a major investment into Dutch solar energy production.

Europe is highly vulnerable to the energy politics surrounding the Russian intervention in Ukraine, which is set to break the EU’s reliance on Russian energy supplies in order to cushion it from the economic fall-out from Russia-NATO tensions.

This week the EU launched plans for a massive increase in solar and wind power with the European Commission stating the bloc needed to find an extra EUR210 billion over the next five years to pay for phasing out Russian fossil fuels and speeding up the switch to green energy. The plan proposes upgrades to the EU green deal, the EU’s flagship policy to confront the climate crisis. The Commission proposed raising the targeted renewables contribution to the EU’s energy mix from 40% to 45% by 2030. About EUR12 billion of the extra spending would be needed to build LNG terminals and upgrade oil plants to allow EU member states to switch to non-Russian fossil fuels.

Sovereign wealth funds and public pension funds are set to be among the main partners for this drive. The drive to develop clean energy aligns with the kind of strategy many SOIs have already been deploying in their push to both de-carbonise their portfolios and gain exposure to long-term structural trends.

Dutch pension fund APG announced this week that it had teamed up with its Ontario counterpart OMERS to acquire Groendus, a new leader in the Netherlands’ energy transition, from investment company NPM Capital. The takeover is OMERS's first investment in the Netherlands and was conducted via subsidiary OMERS Infrastructure.

Groendus was created in March 2021 from the merger of six specialized companies active in, among other things, solar projects, smart metering services and sustainable energy solutions. The producer and supplier has a customer base of more than 4,000 companies, municipalities and institutions and has so far installed 170MW of solar capacity and 12,000 meters. It has already built more than 300 solar power stations in the Netherlands and has the ambition to significantly expand this number, alongside its push for more sustainability solutions, such as smart charging and battery storage.

Upon completion of the transaction, Groendus will be OMERS Infrastructure's fifth global investment in renewable energy sources, alongside Azure Power (India), FRV Australia, Leeward Renewable Energy (US) and Navisun (US). For APG, the investment builds on an extensive global energy transition portfolio, with investments in offshore wind farms for renewable energy, such as Merkur (Germany) and Walney 1Vasa Vind (UK, Sweden).

The investment in Groendus has helped boost SOI investment in renewables to an estimated US$6 billion so far this year – about a third the level achieved in 2021, when investments in the sector by SWFs and PPFs hit a record high of US$18 billion. Europe has come to the fore as a major target of investment, representing 25% of sovereign capital last year and a similar amount so far in 2022. 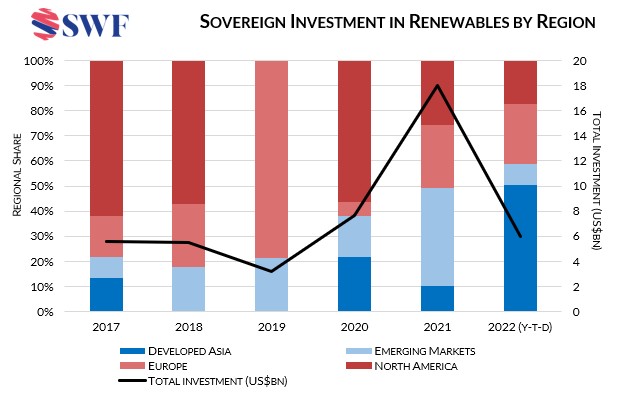 In terms of regions, North America and Northern Europe continue to be the most popular destinations, thanks to a high level of opportunity and a positive regulatory environment, as well as the efforts of certain countries, such as the UK, around FDI. Europe is now rivalling North America for renewables investment. President Joe Biden has made climate change a key theme of his presidency with greater opportunities in a renewables sector, offering potentially higher rewards in an investment environment where carbon carries a penalty. He pledged to “deliver an equitable clean energy future” and after gaining office he outlined grand ambitions to deploy US$2 trillion of investment to clean up a raft of sectors during his first term in office.

Investments in renewable energy are still inadequate and minuscule compared to the overall size of SOIs, but the pace has been accelerating remarkably in the past seven years. We expect these figures to increase significantly in the near future as funds commit to ambitious green goals. For example, CDPQ hopes to raise its “green portfolio” to US$ 44 billion by 2025 and NBIM aimed to spend US$ 11.4 billion in 2021-2022. NBIM’s acquisition of a 50% stake in the Borssele 1 and 2 wind farm off the Netherlands for US$1.63 billion in April 2021 began the Norwegian sovereign fund Goliath's plans to devote 2% of its AUM to renewable energy. Borssele is the world’s second-largest offshore wind farm in operation, with an installed capacity of 752MW. However, progress has been slow.

The APG-OMERS takeover is typical of the kind of partnerships SOIs forge in renewables infrastructure. Other examples are: Cubico Invest (OTPP, PSP), Arevon Energy (ADIA, APG, CalSTRS) and co-investments such as Greenko Energy (ADIA, GIC) and Generate Capital (AP2, AusSuper, QIC). These will be increasingly popular as the industry becomes hotter and sovereign investors seek to rely on external expertise to catch the green wave.