Sovereign funds are key investors in the digitalization of emerging market economies, with e-commerce becoming a prime target for venture capital sprees in recent years.

Turkish grocery delivery startup Getir looks set to achieve a US$11.8 billion valuation with its Series E funding round on the cusp of raising US$800 million, led by Abu Dhabi’s Mubadala with a US$250 million investment and backed by other existing investors, including Abu Dhabi Growth Fund, the venture capital arm of one of the emirate’s other sovereign funds ADQ, as well as new investors Alpha Wave Global, Sequoia and Tiger Global. The latest valuation is a giant leap from June 2021, when it was worth US$7.6 billion. ADQ has also invested in another Turkish e-commerce platform, Trendyol, and participated in a US$1.5 billion funding round alongside the Qatar Investment Authority (QIA) last August, which valued the superapp at US$16.5 billion. Since its launch in 2010, Trendyol has notched up 30 million customers, delivering 1 million packages per day.

The interest in Turkish e-commerce – even at a time when the country’s economy is under strain – is part of a wave of investor interest in the sector. In 2021, venture capital investment in e-commerce by state-owned investors peaked at an estimated US$6.7 billion as the lockdown led to surging online orders. With lockdown lifted and consumers returning to the malls, the sector’s profitability has come under question and competition is fiercer.

The long maturation time between starting business and becoming profitable means that the patient capital of sovereign investors is prominent in funding rounds. Although Getir’s losses are projected at US$1 billion this year, it is forecasting annual earnings rising to US$3.5 billion by 2025 - a decade after its launch. 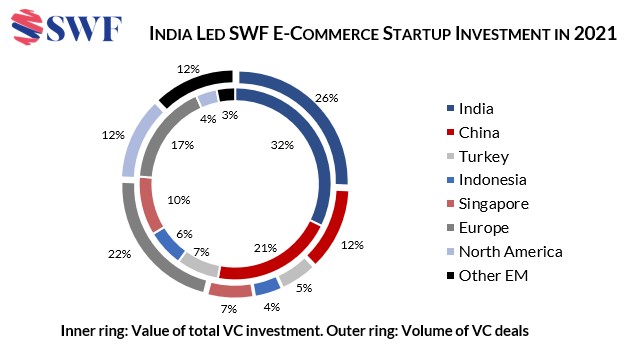 Emerging markets like Turkey can still offer attractive rates of growth amid rapid take-up of smart phone technology and 4G networks. Getir’s transactions are projected to leap to US$73 billion from US$2.4 billion at end-2021, putting it well ahead of prominent developed market e-commerce startups. The surge in growth will rely on penetration of developed markets beyond Turkey, indicating that the e-commerce startup and its backers view EMs as a springboard for entry into Europe and North America. Indeed, in 2021 emerging markets made up an estimated 90% of value and 57% of the volume of venture capital investment by sovereign funds in e-commerce.

Aside from Turkey, hotspots include China, India and Indonesia, owing to the sheer scale of their populations as well as their growth in digitalization as they catch up with developed markets. China has become a major incubator of e-commerce platforms, notably Alibaba which received the backing of an array of state-owned investors ahead of its IPO in 2014, with China Investment Corporation (CIC) investing at an early stage. Since then, interest has focused on the next Alibaba, both in China and elsewhere, as well as more niche market segments.

India led sovereign investor interest in e-commerce since the start of the Covid-19 pandemic with Flipkart and grocery deliver company Zomato attracting multiple funds. The South Asian behemoth has seen a rapid process of retail digitalization was boosted by the impact of lockdown. India’s e-commerce leap would be impossible without the development of mobile network and increased internet penetration, which stands at about 1.2 billion subscribers today, alongside the government’s efforts at digital inclusion.

Zomato’s US$12 billion IPO – 35 times over-subscribed – last July justified sovereign investor confidence and only fuelled enthusiasm for online retail. Flipkart has been majority owned by Walmart since 2018, but has also won the backing of ADQ, QIA, Singapore’s GIC, Khazanah and Canada’s CPP Investments with a planned IPO this year that investors believe will value the company at US$50 billion. If successful, this would be the largest IPO in the consumer tech space in India.

Indian tycoon Mukesh Ambani attracted a host of state-owned investors into his retail and telecom arms in 2020. ADIA, GIC, Mubadala and PIF featured prominently in fund-raising by Reliance Retail Ventures Ltd (RRVL), which intends to link neighborhood stores for online deliveries of groceries, clothing, and electronic goods through its JioMart platform. The move linking SMEs to e-commerce is a direct challenge to Flipkart, to Amazon India and to Big Basket.

Like Turkey, Indonesia is expecting “decacorns” from its retail startups. Analysis by Temasek and Google forecasts that the Indonesian e-commerce market will grow from US$21 billion in 2019 to US$82 billion in 2025.

Eyes are on GoTo, which was formed out of a merger of locally grown Tokopedia and Gojek, which already had the backing of Singaporean state-owned investors Temasek and GIC. The merger in May 2021 brought together Gojek’s position in courier deliveries with Tokopedia’s e-commerce platform to create a local Amazon-style business with an added fintech bonus of its own e-payments subsidiary. In October, the Abu Dhabi Investment Authority led a pre-IPO round in GoTo with a US$400 million investment. This week, it issued a prospectus for an IPO to raise around US$1.3 billion in April with an aggressive valuation of US$29 billion, which would make it the fourth-biggest company listed on the Indonesian Stock Exchange.

GoTo’s IPO comes in the wake of the listing of another Indonesian e-commerce giant Bukalapak, which listed in August, raising US$1.5 billion in Indonesia's biggest IPO, valuing it at US$6 billion. GIC had backed the startup in late stage rounds last year. Bukalapak also provides a warning of the risks of EM startups. The company has seen its stock price slashed by more than two-thirds since listing after it reported a US$3.6 billion annual loss.