The SoftBank Group reported a record annual loss of JPY2.64 trillion (US$20.5 billion) in FY2021/22 across its Vision Fund unit as a selloff in tech stocks pounded the value of its portfolio companies, including public holdings like Coupang, Uber and Didi Global. The loss is a reversal of fortunes from the previous year when the Vision Fund recorded full-year profit of JPY5 trillion, although in 2019 it reported a JPY1.9 trillion (US$17.7 billion) loss – an indication of the volatility of the venture fund’s earnings.

For PIF and Mubadala, the losses are a setback. PIF invested US$45 billion in Vision Fund I (SVF1) while Mubadala sunk US$15 billion into the fund, which invests in emerging technologies and has also invested in disruptive startups in real estate, retail and transportation. SVF1 has seen investments slump in the past quarter to less than a tenth of the peak achieved in the first quarter of FY2018.

The biggest losses were seen in the transportation (US$13.1 billion) and consumer (US$8.7 billion) sectors, while frontier tech gained US$2.9 billion and enterprise produced profits of US$0.3 billion. 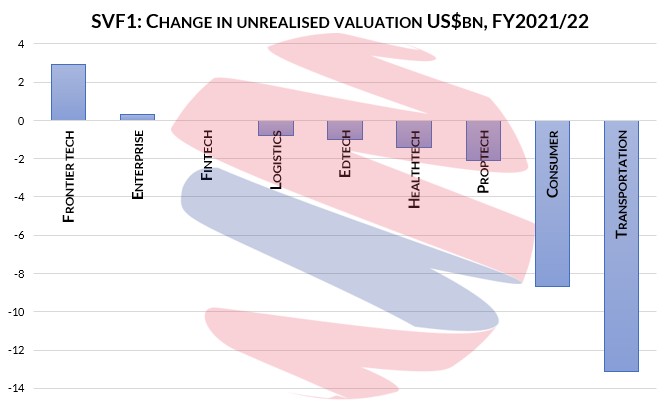 Since 2018, SVF1 – with its strong SOI backing – has plunged around US$ 12 billion in Chinese private equity with exposure to these tech-driven consumer segments, from TikTok creator ByteDance to the world’s most valuable AI pioneer SenseTime. However, SoftBank is now less vulnerable to the Chinese government’s crackdown on its tech sector, with Alibaba Group Holding accounting for 22% of its net asset value, compared with 59% in the previous year.

Before the pandemic hit, there was mounting concern that the influx of VC into the Tech sector was leading to inflated asset values, generating fears of a repeat of 1999 when the tech bubble burst.

SVF1 points to the significant risks involved in betting on venture capital in tech. Although Uber’s IPO was one of the biggest in history raising US$ 8 billion, a badly timed launch meant it failed to reach expectations – which, alongside the near-collapse of WeWork, raised questions over SoftBank CEO Masayoshi Son.

Although the fund bounced back into the black on a wave of equities growth in 2020, doubts over SoftBank’s strategy prompted state-owned investors to opt out of Vision Fund 2. VF1’s latest losses suggest they did the right thing in looking at other general partners as well as originating their own deals.