The Public Investment Corporation (PIC), Africa's biggest pension manager with US$ 157 billion in AuM, has been buried in allegations of corruption since Jacob Zuma’s presidency. When Cyril Ramaphosa took office in 2018, he made his mission to root out such issues, including Zuma, the Guptas, and PIC. Four years later, it does not seem that things have improved much in the country or at the fund manager.

In March 2020, after months of public hearings, a commission appointed by Ramaphosa concluded that at PIC there was “both impropriety and ineffective governance in a number of investments, which presented an opportunity for enrichment of single individuals”. Several executives, including board member Sibusisiwe Zulu, CEO Daniel Matjila, CFO Matshepo More, Ernest Nesane and Paul Magula were promptly dismissed.

The main scheme, as we have seen in other SWFs including 1MDB and FSDEA, was done through asset managers including Harith Fund. Worse yet, the commission found significant irregularities in the execution of the Black Economic Empowerment (BEE) initiative, which PIC manages on behalf of the government, bringing back matters of racial differences and tensions. 90% of PIC’s capital comes from the Government Employees Pension Fund (GEPF), Africa’s largest pension plan with 1.2 million active members.

In May 2020, Abel Sithole transferred from GEPF, the asset owner which he was the CEO for since 2015, to PIC, the asset manager. Sithole was rumored to wear “too many hats” but the fund was seen as getting a clean slate and moving past its issues. However, this week, the problems resurfaced as PIC announced the dismissal of COO Vuyani Hako on alleged misconduct, and the “resignation” of two other executives.

To make things worse, the country’s second largest pension fund, the Eskom Pension and Provident Fund (EPPF), which manages US$ 11 billion in pensions for the public utility company, has also been subject of investigations, with CEO Brian Molefe unlawfully awarding himself millions of dollars. Since 2007, South Africans have grown used to power cuts and blackouts due to electricity supply falling behind the demand.

In this context, very few are taking serious President Ramaphosa when he announces grand plans for a US$ 2 billion Sovereign Wealth Fund. South Africa is in the midst of a serious economic slump, with the rand devaluating 50% against the USD in the past 10 years, and with rising levels of external debt, which match the growth of the country’s major pension pool. The economy is projected to grow a 2.1% in 2022.

Yet, there is some glimpse of hope. Both GEPF (108%) and EPPF (145%) are fully funded – if those figures are accurate and audited – which is more than most US pension plans can say. And there are continuous efforts to make things better. But when it comes to South Africa, there is always a long way to go. 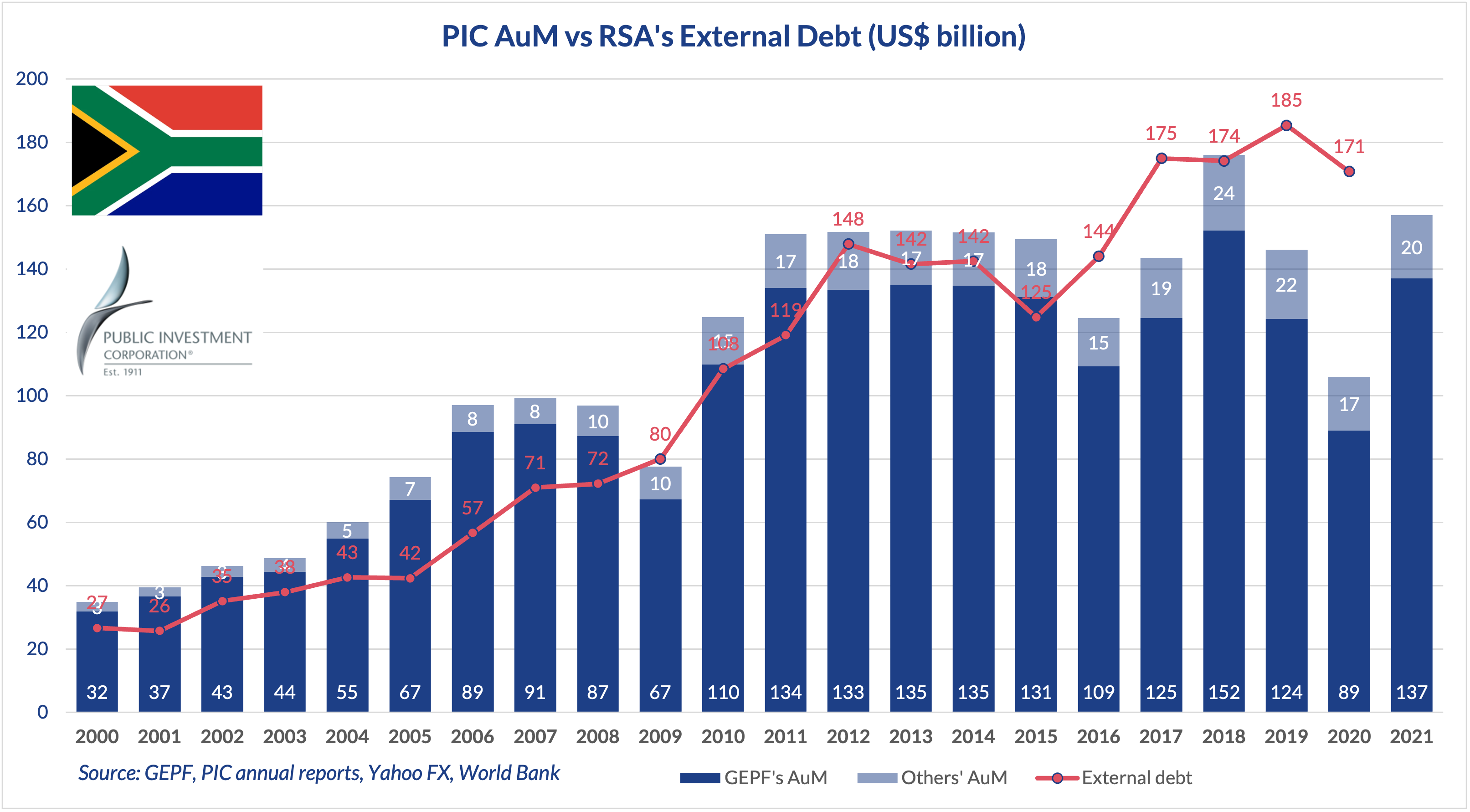