Turqi Alnowaiser, who heads PIF’s International Investments Division, and Yazeed Alhumied, who leads the Middle East and North Africa Investments Division, were given the roles. PIF is also boosting its personnel to more than 1,100 – around twice the level of its larger Kuwaiti stablemate KIA, which has estimated AUM of US$588 billion, and a bigger headcount than the US$1 trillion+ funds Norway’s NBIM and China’s CIC. The direction of travel indicates that PIF is seeking not only to grow through developing chunky domestic real assets, but also as an active global investor.

The new PIF Program 2021-2025 goals indicate US$ 40 billion to be invested every year within the Kingdom (which seems attainable given the scale of the giga-projects), a 21% in new and growth sectors (1% up) and 1.8 million direct and indirect jobs to be created in the Kingdom. PIF has also grown its AUM to $430 billion since 2016, and has invested approximately $90 billion in the Saudi economy during that time, while creating more than 331,000 new direct and indirect jobs in Saudi Arabia. 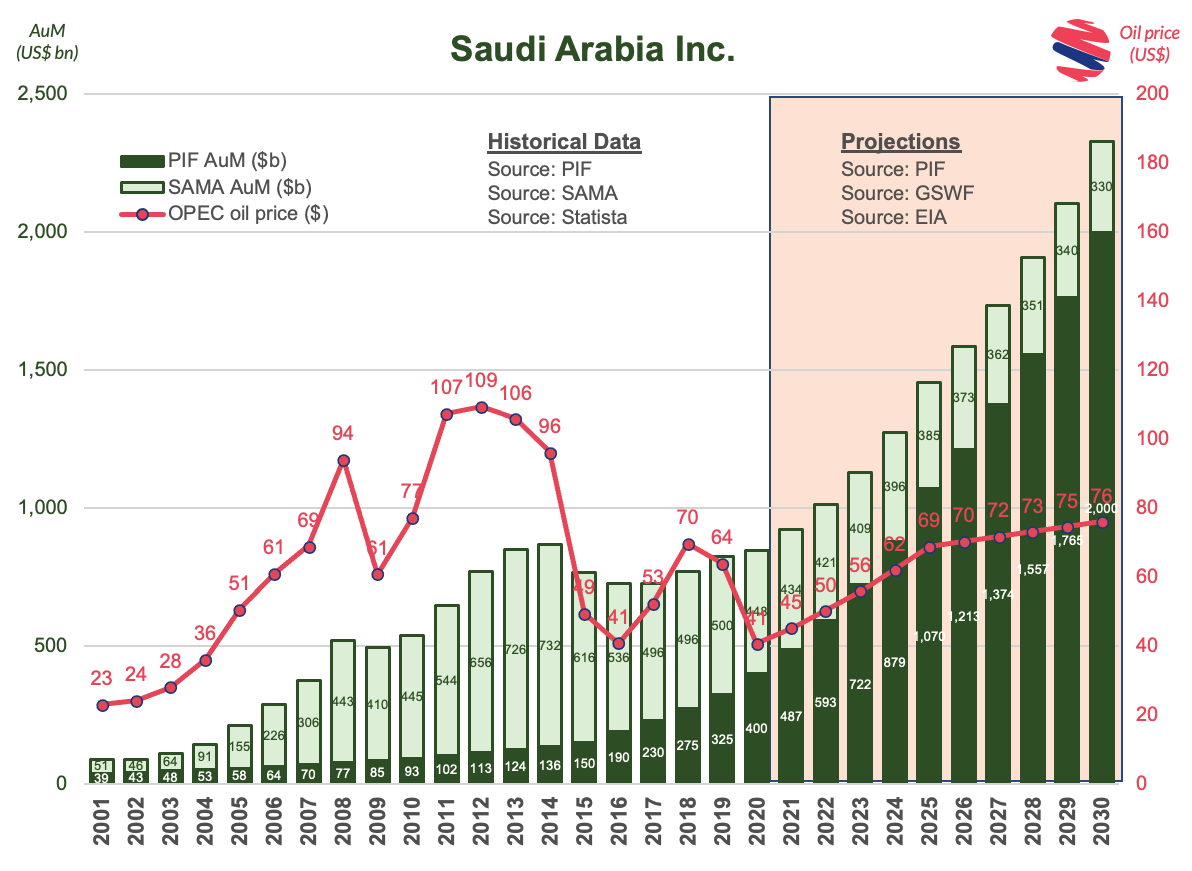 In international investments, Global SWF notes that PIF is developing sophistication in its public equities strategy. It ramped up its US public equity portfolio to new highs in Q121 with US$15.45 billion of holdings – up 21% over end-Q420 and 58% above the same moment in 2020. After a period of mixed messages over the fund’s strategy, clear trends are emerging that point to a strategy oriented towards stocks that are set to benefit most from the post-pandemic recovery as well as the disruption caused by the crisis, particularly in tech-oriented sectors. Its investments in retail and consumer stocks grew from 64% to 75% of total US public equity holdings compared to end-2020.

In terms of recent MENA activity, the fund is entering the growing market for direct lending by becoming an anchor investor in a shariah credit fund. The US$300 million fund, launched by NBK Capital Partners, will be disbursed across the GCC region and North Africa with 10 to 12 investments each ranging from US$15 million to US$50 million over eight years. It will be NBKCP’s first fully Islamic fund. It could signal the beginning of a strong thrust into private credit in an effort to stimulate broader lending availability in Saudi Arabia and beyond.

PIF has already sought to expose itself to the credit market by founding the Saudi Real Estate Refinance Company (SRC) in 2017, which is supporting growth of the Kingdom’s mortgage market. SRC announced in March a US$1.07 billion in long-term sukuk issuances, providing liquidity to the Kingdom’s housing market.  The subsidiary aims to increase home ownership from 50% in 2018 to 70% of Saudi nationals by 2030 and raise the contribution of real estate financing to non-oil gross domestic product from 8% to 15%.

To achieve its ambitious targets, PIF is looking to sources of dry powder, which come from divested state assets and debt raising. In March, PIF raised a US$15 billion revolving credit facility with a group of 17 banks. PIF started raising bank debt in 2018 with an US$11 billion facility, followed in 2019 by a US$10 billion loan which it then repaid in 2020.

The sale of a 1% stake in Saudi oil giant Aramco, as mooted in April, could see PIF take a slice of the proceeds to fund domestic mega projects. Aramco’s 2019 IPO raised US$25.6 billion with further share sales bringing the total to US$29.4 billion – all of which was transferred to PIF to support economic diversification. Based on its current market capitalization, a 1% stake in Aramco would be valued at US$19 billion and give a significant boost to the fund’s coffers.