As it launches new offices in Hong Kong, London and New York, Saudi Arabia’s Public Investment Fund (PIF) is looking at paring back its US$90 billion stake in oil major Saudi Aramco, which was gifted to it by the government earlier this month, and potentially diversifying its private equity and real assets strategies.

Geopolitical risks have boosted PIF’s portfolio. Bloomberg cited unnamed sources that suggested the fund was considering monetizing some of the 4% stake through selling it or “raising money by pledging the stock against the issue of convertible debt instruments or loans.” Shares in the Tadawul-listed oil giant reached SAR42 (US$11.2) at the end of close on Thursday, up 12.6% from the level at the time PIF took possession and boosting PIF’s AUM by around US$10 billion in less than two weeks. Growth in the stock’s value has been spurred by Russia’s invasion of Ukraine.

Liquidity generated by selling part of the stake could provide funds for the three new subsidiary offices opened this week. PIF is looking to global growth to boost AUM as it seeks to become a US$1 trillion fund by end-2025 and US$2 trillion by 2030, up from US$570 billion today – including the value of the Aramco stake.

Since 2017, the fund has increased its share of international investments from 3% to 20% and has grown its staff from 40 to more than 1,000. Opening offices is the next step in its evolution as it aims to raise the portion of foreign assets in its portfolio to 50% by the end of the decade. Last year, it was boosted with liquidity flowing from excess foreign reserves held by the central bank, the Saudi Arabian Monetary Authority (SAMA), which has given it plenty of dry powder to advance its aggressive growth.

The Saudi fund’s foreign interests have largely centred on technology, media and telecommunications as well as the entertainment industry. It was a backer of SoftBank’s Vision Fund I, investing US$45 billion in the tech-focused venture capital fund. Since then, it has mostly looked to developing its public equity portfolio. Yet, to develop yield and meet its ambitious targets, it will need to advance its venture capital strategy.

PIF is rapidly evolving its public equities strategy, which has moved from long-term chunky holdings to behaving more like a retail investor and now taking a more sophisticated approach to boost long-term yield in the asset class. At present, it has a high weight in US equities with holdings, totalling US$55.9 billion at end-Q4 2021 – boosted by the IPO of electric vehicle producer Lucid Motors. The US equity portfolio was over 260% larger than at end-2020, largely due to Lucid.

The investment in Lucid was a major success for the fund’s nascent venture capital strategy, providing a massive return on investment as it went public last year. It will now have to repeat this on a grander scale to achieve lucrative exits. An office in New York could be followed by a second US office in San Francisco to invest in Silicon Valley startups.

PIF is likely to use its Hong Kong office to increase its exposure to listed Chinese companies, particularly in view of the restrictions on Chinese IPOs on the NYSE. In November, it applied to become a Qualified Foreign Institutional Investor (QFII) – a status that enables direct access to trade “A-shares” of Chinese stocks, denominated in China’s renminbi/yuan (RMB), on Chinese stock exchanges.

Advancement in Chinese markets indicates a desire to diversify equity exposures, although until disclosures on its holdings are available it is unclear whether PIF will emulate its US equity strategy. If it wants exposure to Chinese Big Tech, the Saudi fund will be mindful of the move by the Chinese authorities to ban internet companies whose data poses potential security risks from listing in the US. Supervision of firms listed offshore is being boosted after a cybersecurity investigation into ride-hailing giant Didi Global in July. But Hong Kong is not just a base for investment activity in China, but also a springboard into other Asian markets, such as India where PIF already has sizeable interests, mostly concentrated in telecommunications and e-commerce subsidiaries of the Reliance Industries behemoth. 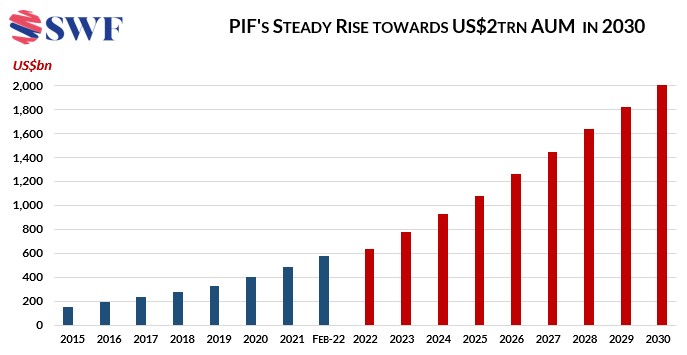 In the British market, recent investment has focused on its acquisition of Newcastle United FC and the carmaker McClaren Group. However, PIF has trailed peers in the UK, which attracted more than US$22 billion of sovereign capital in private equity, infrastructure and real estate in 2021.

The British government’s bid to “build back better” from the economic crisis sparked by the pandemic has prompted it to adopt ambitious targets for carbon reduction that will entice SOIs to participate in an expected surge of renewables projects. Renewables hit several sweet spots for long-term investors with lots of capital to deploy: they are revenue-generating real assets with potential for growth in value and scale and they fit neatly into environmental sustainability goals. Other British strengths that PIF’s VC strategy is likely to home in on are pharmaceuticals and life sciences, areas that the fund has yet to gain exposure.

London’s position as a global financial hub is also attractive for the fund’s banking interests. PIF was instrumental in orchestrating the merger of the National Commercial Bank and rival Samba Financial Group. The merger was completed in January with the creation of the Saudi National Bank (SNB), a lender with a market value of US$82 billion with PIF the biggest shareholder with a 37% stake. The bank is looking to snap up banking assets in Europe and Asia.