The world is set to see a new major flag carrier in the aviation industry, courtesy of Saudi Arabia’s Public Investment Fund (PIF) which is establishing a new airline with a US$30 billion capital injection.

RIA will be the Kingdom’s second national carrier after Jeddah-based Saudia, which is set up to rival the Gulf region’s other sovereign wealth fund-owned airlines. It forms part of a planned US$100 billion in aviation investment under Saudi Arabia’s Vision 2030 program, the brainchild of the Kingdom's de facto ruler Crown Prince Mohammed bin Salman (MBS).

When launched, RIA will be the world’s 25th airline that is fully or partly owned by a sovereign wealth fund. Arabian Business reports that RIA will be headquartered in the capital Riyadh and is part of Saudi Arabia’s drive to increase international transit passengers from under four million in 2021 to 30 million by 2030. The new carrier is reportedly targeting more than 150 international routes, putting it on a par with Emirates, which operates 254 planes.

The news of a new airline comes just two months after the PIF launched AviLease, an aircraft leasing company, which the fund says will become a “core element” of the Kingdom’s expanding aviation ecosystem. PIF said that the company will “scale through purchase-and-lease-back transactions, secondary portfolio acquisitions, direct orders from aircraft manufacturers, and corporate acquisitions.” The fund has appointed big guns in the sector to run AviLease, including industry veteran Ted O’Byrne, former co-head of aviation at Carlyle Group and previously CIO of Ireland-based AerCap, who was appointed CEO.

According to Global SWF research, SWF-backed airlines operate 2,817 planes and have received more than US$19.3 billion in capital injections since the start of the first global lockdown in March 2020 – a third of which was absorbed by four operators: Turkish Airlines (TVF), Qatar Airways (QIA), Saudia (PIF) and Emirates (ICD). While many SWFs hold stakes in domestic airlines, some have also invested in other nations’ flag carriers, such as International Airlines Group (IAG) which includes the UK’s British Airways, Ireland’s Aer Lingus and Spain’s Iberia and is 20% owned by QIA via Qatar Airways. 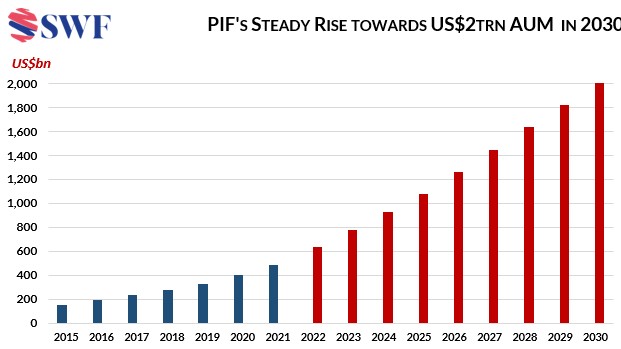 PIF is aiming to reach total AUM of US$2 trillion by the end of the decade, up from US$560 billion today, after adding the equity stake in Aramco to the portfolio. To almost triple its size by 2030, PIF needs to increase in its portfolio size of US$15 billion per month – a staggering rate of growth that is only likely to be achieved through more asset transfers from the government.

Aside from RIA and AviLease, over the past five years the Saudi fund has committed more than US$21 billion to a range of national infrastructure projects, including telecommunications (Zain KSA Telecoms Towers), ports (Red Sea Gateway Terminal), renewables (Super-Esco), and power and desalination (ACWA).

In May, PIF has snapped up a 17% stake in Kingdom Holdings (KHC), a Saudi private investor in industry and real estate majority owned by its billionaire founder Prince Al Waleed bin Talal Al Saud, for US$1.5 billion – suggesting the two entities could align more closely in areas of common interest. Major exposures to the hotel and leisure sector and aviation hit the holding company during the pandemic.

Alongside strategic domestic investments, PIF could emerge as the Kingdom’s healthcare provider. Last month, PIF announced that it is aiming to develop the Saudi healthcare sector to improve the quality of life and that its portfolio companies contributed to the development and localization of healthcare services. The statement came alongside the creation of a new Health Holding Company (HHC), which raised the prospect that the sovereign wealth fund will follow Abu Dhabi’s ADQ in taking control of local health services both as a strategic concern and as a commercial enterprise. In June, Saudi Arabia’s Ministry of Health stated it had transferred day-to-day healthcare operations to the new company, which is set to include expansion of digital health programs and virtual medical services in the Kingdom.

To finance these huge commitments, the Kingdom’s government is heaping it with national assets. In February, it received a US$80 billion shot in the arm with the transfer of a 4% in national oil company Aramco – less than two years after the completion of PIF’s sale of a 70% stake in Saudi chemicals major SABIC to Aramco for US$69 billion.

MBS is keen to transfer capital to PIF from existing resources to support his vision for the fund, mindful that organic growth in asset value will not meet the ambitious AUM target. Last year, the Saudi government overhauled SAMA to divert hard currency surpluses in favor of PIF. It is thought that the two state funds will receive the excess of reserves, after the amount needed to defend the riyal’s peg against the US dollar. SAMA’s investment portfolio has focused on low-risk assets, such as US bonds, but MBS wants to use the funds raised through oil wealth to bolster his vision of economic diversification as well as achieve a better yield from national savings.