Russia’s decision to ditch the US$ from the holdings of the National Welfare Fund (NWF) and switch to other currencies reflects geopolitical dynamics as the Putin administration responds to US-led threats of sanctions – but the decision threatens to expose the portfolio to higher levels of risk.

The US$186 billion sovereign wealth fund is set to divest US$41 billion of the currency, representing 35% of its portfolio, and increase investments in euro to 40%, Chinese yuan to 30% and gold to 20% with the remainder comprised equally of yen and pound sterling. The move will affect the liquid part of the NWF, which currently stands at around US$120 billion, and US dollars will be transferred internally to another account run by the Central Bank.

The shift in currency exposure would mark NWF out as an outlier in the SWF world. Global SWF research finds that there is strong dominance of US$ within SWF portfolios, due to the favoring of US Treasuries and equities as sources of security. Overall, 41% of total SWF portfolios are held in US$ assets, while among public pension funds and central banks the portion is 52% and 60%, respectively. CNY represents 11% of total SWF holdings, compared to 4% among PPFs and 2% among central banks. There are, of course, a wide range of differences between funds, guided by their mandate and long-term strategy. 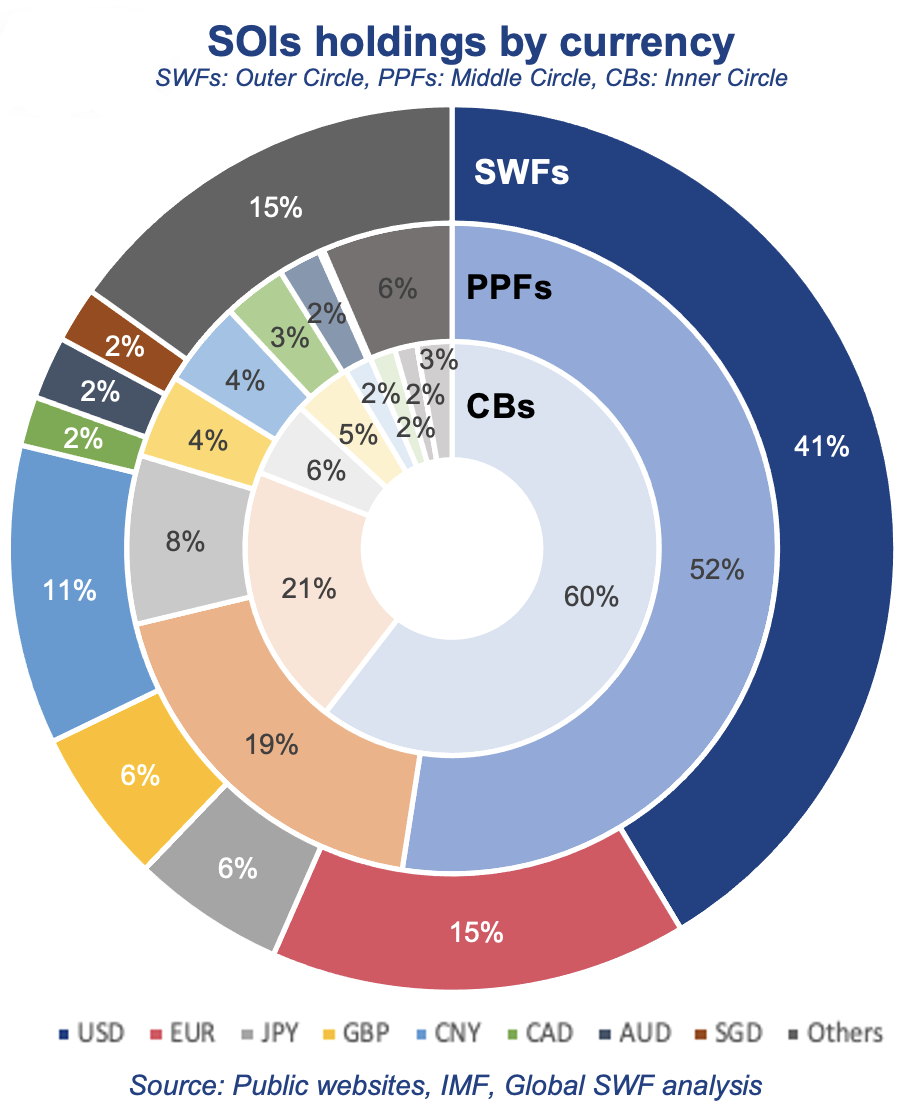 NWF’s mandate has evolved into a hybrid of stabilization and savings, although the future purpose of the fund is vague and under debate. Stabilization funds tend to have a high level of hard currency allocation with a conservative risk-averse portfolio, while savings funds are highly oriented towards foreign currency and a heavier weight than other funds in EUR, JPY and GBP. As such, NWF would be heavily weighted in CNY for a fund of its type.

The decision to significantly ramp up the portion taken by CNY is highly unusual for an SWF due to potential currency risks, which have a significant downside given geopolitical factors and the constant threat of competitive devaluation. In the case of the Chinese currency, another confrontation between China and the West, particularly the US, either in the form of an intensification of a trade war or relating to Hong Kong, Taiwan or the South China Sea could undermine the CNY – and, in turn, a sizeable chunk of the NWF.

The potential volatility of the CNY is partly offset by EUR holdings, which should provide some stability – and, in RUB terms, potential for growth in portfolio value with any depreciation of the Russian currency. Among SWFs, EUR holdings are 15% of total assets – less than half of NWF’s target.

Nevertheless, there is an ongoing debate on the purpose of the fund that could lead to a diversification of the portfolio. At present, the NWF’s non-liquid holdings are almost entirely domestic and comprised of infrastructure assets and stakes in banks and industrial companies, but there are growing demands for the fund to be used to stimulate the flagging economy, potentially to support the National Projects package and National Recovery Plan, which are lagging behind targets. Such a measure could see the fund draw on its currency holdings, leading to a further reconfiguration of currency exposures - with non-liquid assets denominated in RUB increasing as a percentage of the overall portfolio.