The C-suite churn in sovereign investors has shown no sign of abating this year with a total of 16 new CEOs to date, compared to 20 in the whole of 2021.

Two high profile voluntary resignations were announced in recent days, with a total of four resignations in the year-to-date, compared to one resignation in the whole of 2021. Retirement is the cited reason for half the change of leadership in state-owned investors this year, the same proportion as last year. Two CEOs have been ousted from their jobs (three in 2021) and two are appointed to head newly created funds (two in 2021).

The shake-up comes ahead of parliamentary elections in which the ruling government is faced with a strong nationalist opposition. A pugnacious parliament has sought the dismissal of officials associated with the government the government of Prime Minister Sheikh Sabah al-Khalid, which resigned in April. The fund has, however, performed well under Al-Othman with an annual return of 35.9% in 2021, led by public equities which represented 35% of total AUM; it also holds 25% in fixed income and 40% in alternatives.

Meanwhile, in recent days the first CEO of India’s US$4.3 billion National Investment and Infrastructure Fund (NIIF), Sujoy Bose, has tendered his resignation. NIIF is a manager that solely invests in Indian infrastructure. The Indian government has 49% stake in NIIF with the rest held by marquee foreign and domestic investors and multilaterals, including ADIA, Temasek, OTPP, AustralianSuper and AIIB. NIIF is structured in three different funds: Master Fund (the largest infrastructure fund in India), Fund of Funds, and Strategic Fund.  The fundraising and objectives of each of the funds is different, but the NIIF team is the same.

In June, via the Master Fund, NIIF invested US$300 million to acquire a 22.5% in Hindustan Ports Pvt. Ltd (HPPL), a wholly-owned subsidiary of UAE government-controlled firm DP World. NIIF and the Dubai-based port operator, which is a wholly owned subsidiary of state-owned investor Dubai World, created a US$3 billion platform in January 2018 to invest in transportation and logistics assets, including ports, in India.

Earlier this month, Rodrigo Madrazo, director general of Spain’s state-owned investor COFIDES, was appointed CEO of the EDFI Management Company, which is co-owned by nine major European development finance institutions including COFIDES; he will take up the position in November. Since he took over the investor’s leadership in 2018, he has boosted its AUM from EUR2.3 billion to EUR3.4 billion.

Other voluntary resignations this year include Bo Foged of Denmark’s ATP, who was replaced by Martin Praestegaard in the summer. Representing the third change at the top of the fund in seven years, Foged left to take on a partner role at Copenhagen Infrastructure Partners, the energy infrastructure fund manager co-founded by PensionDanmark in 2012. 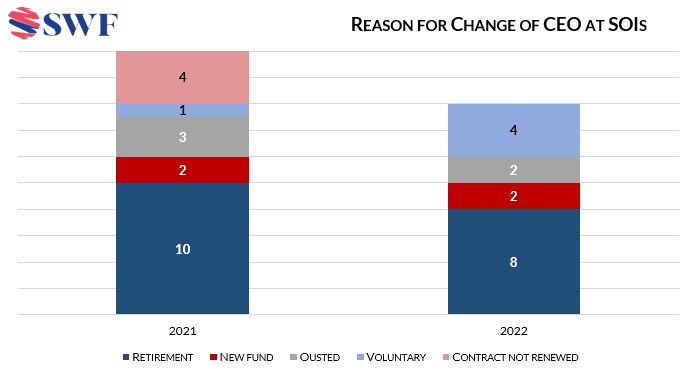 Galymzhan Tajiyakov’s termination of contract at Kazakhstan’s national savings fund went unremarked, with no reasons given. Last year, the country’s bigger sovereign investor, the US$69 billion Samruk-Kazyna, witnessed a change of management and organizational overhaul as President Kassym-Jomart Tokayev seeks to purge the influence of his predecessor Nursultan Nazarbayev and his family.

In the case of Al-Ateeqi, the departure was caught up in the political ructions back home and reported divisions within KIA over reform and modernization. In a curt statement on Instagram, the KIA stated, "The termination of the contract of the head of the KIO has its reasons and justifications that the KIA keeps to itself. Also, the whole issue is before special investigation committees, and before the public prosecution."