QIA reaches US$ 445 billion AuM, gets ready to take off

The Qatar Investment Authority (QIA) has started 2022 in a very strong manner, and everything indicates that it may be getting ready to fly high once again. On the one hand, the strong returns of public and private equities during 2021 helped grow its balance sheet to an record high with an estimated US$ 445 billion. On the other, the organization recently completed a restructuring of its governance and structure, adapting it to the new normal and opportunities.

Until very recently, Qatar’s SWF was one of the favorite picks of journalists around the world. Between 2005 and 2013, “the Hamads” (Hamad bin Khalifa, or HbK, the Emir of Qatar and Chairman of the QIA; and his cousin Hamad bin Jassim, or HbJ, Prime Minister of Qatar and CEO of the QIA) put the emirate in the world map, thanks to the large number of trophy assets acquired by the fund, from Harrods and the Shard, to Glencore, Iberdrola and PSG.

Everything changed with the abdication of HbK, who gave up his seat as emir to his fourth son Tamim at the pinnacle of his influence in 2013. Tamim provisionally replaced his father as Chairman of the QIA, and appointed Ahmed Al Sayed as the CEO. Despite not belonging to the royal family, Al Sayed had had a successful run in the organization as the CEO of Qatar Holding, closing deals hand in hand with HbJ. But he would not last much as CEO.

In 2014, “the Abdullahs” (Abdullah bin Hamad, brother of Tamim, as Chairman and Abdullah bin Mohammed as CEO) took over and started a period of review, reflection and, to certain extent, austerity. The grand opening of the New York office was underway, but it would remain almost empty for the next few years. As pointed out in our annual report, the fund dropped from the ranking of Top 10 most acquisitive SOIs in 2016, and has not made it since.

Four years ago, a new leadership came into play, with Mohammed bin Abdulrahman Al Thani, the Deputy Prime Minister, becoming Chairman of the QIA and Mansour Al Mahmoud, the CEO. Al Mahmoud had actually been one of QIA’s first employees, and was trained at the CEO office before gaining experience in a few other departments and organizations, including Qatar Development Bank and Qatar Museums. He has not had an easy mandate as CEO, after dealing with the pandemic and some embezzlement allegations over a board member, who was removed in 2021.

Today, the QIA enjoys a brand-new board comprised of eight members (four Al Thani’s) and a new structure with four regional groups (Americas, Europe-Russia-Turkey, Africa-AsPac and Qatar), nine sectorial teams and separate departments for liquid securities and capital markets. In addition to New York, it recently opened an office in Singapore, shutting down Mumbai and Beijing, and recruiting local talent to pursue investments across the region.

In January, the SWF completed three smaller VC investments that continue the pattern of 2021: a Series D in US-based Checkout.com, a Series E in Malaysia’s Carsome and a Series K in India’s Swiggy. This week, however, the QIA upped its game when it committed US$ 1.5 billion to Bodhi Tree for consumer technology opportunities in Southeast Asia, with a particular focus on India. The partnership will double down QIA’s private market portfolio in the country.

The organization has grown considerably in the past few months and is still building muscle in most regional and sectorial teams. As these new teams get settled in Doha in or around Ramadan, we expect the QIA’s investment activity to increase significantly in the remainder of the year – taking the fund, once again, to the world’s Top 10 table. 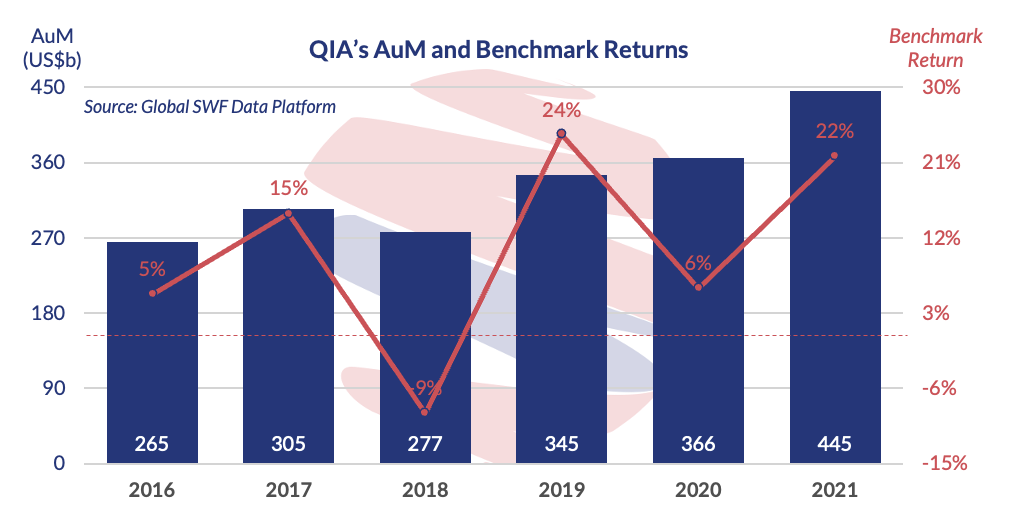