Saudi Arabia is striding forward with its Vision 2030 program, with the Kingdom’s sovereign wealth fund the Public Investment Fund (PIF) setting the pace.

Vision 2030 is the brainchild of Crown Prince Mohammed bin Salman (MBS) who is seeking to ween the country off its dependence on oil and develop a diverse and balanced economy.

This week, the Ministry of Investment (MISA) teamed up with PIF subsidiary Jada Fund of Funds to bolster local startups and back the “Catalyse Saudi” economic diversification drive. “Catalyse Saudi” seeks to engage foreign investors with Saudi entrepreneurs. The initiative forms part of Vision 2030’s aim to increase SME contribution to GDP from 21% to 35% by 2030. Last year PIF backed NBK Capital Partners’ first closing of its targeted $300 million Shariah Credit Fund, which is its first venture capital and third private credit vehicle and will support medium-sized businesses with an operating profit of US$5 million to US$100 million.

This week also saw another PIF subsidiary the Jeddah Central Development Company sign an agreement with the Royal Saudi Air Defense Forces Institute to acquire a prime site for the Phase One of its SAR75 billion (US$20.4 billion) Jeddah Central Project. The New Jeddah Downtown development, launched by MBS in December, covers 5.7 million sq m of land overlooking the Red Sea and includes four landmarks: an opera house, museum, sports stadium and oceanarium. Additionally, there will be 17,000 residential units and hotels hosting a total of more than 2,700 rooms. Phase One spans 1.5 million sq m and includes a sports stadium, beach and recreation areas, which will be completed by end-2027.

PIF has engaged in massive multi-billion dollar investments in a wide range of real estate, tourism, industrial and private equity investments in order to put the national economy on a more sustainable footing. The most prominent are:

The closed joint-stock company NEOM, which aims to develop a US$500 billion economic zone owned by PIF, creating green city that is built in a straight line for 100 miles, with no cars, but served by a hyper-speed rail. NEOM will create 16 key economic areas, including energy, manufacturing and tourism with projects such as THE LINE (urban development), OXAGON (industrial city) and TROJENA “sustainable mountain tourism destination). Its goal is to ensure all residents and industries in NEOM are powered by affordable 100% renewable energy.

Next month, NEOM’s chief executive Nadhmi Al-Nasr and finance sector head Layth Al-Shaiban are set to meet bankers and investors in New York to drum up capital for the high-tech hub, following a similar event in London last year. Although there are high ambitions for the giga-project, progress so far is mostly limited to earthworks.

This week NEOM announced the launch of its subsidiary company ENOWA, which will lead the development of sustainable energy and water systems. Supply of energy and water is essential to OXAGON’s efforts to secure tenants for its manufacturing hub. ENOWA aims to complete the world's largest green hydrogen production plant in an equal joint venture with Air Products and PIF affiliate ACWA Power by 2025.

In keeping with its green energy drive, Saudi Arabia has launched a carbon market initiative with potential partners including national carrier SAUDIA, ACWA Power, Ma’aden and ENOWA. Directing the initiative, PIF said that the five Saudi businesses had signed non-binding memoranda of understanding to become partners of the MENA regional Voluntary Carbon Market with the first auctions due in Q4 2022. The VCM will connect the supply of carbon credits with demand from investors, corporates and institutions wanting to reduce their carbon footprint. 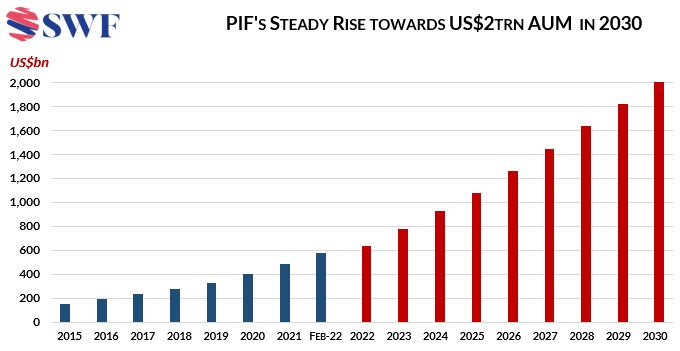 PIF-backed tourism giga-projects are intended to be world-class international tourism hotspots, they are specifically intended to draw Saudi tourists who currently spend US$30 billion annually on entertainment and tourism abroad, according to some estimates. AMAALA is being designed as a major luxury tourism destination. It is divided between three main sections, Triple Bay, The Coastal Development and The Island.

PIF is also leading the Aseer Development Project, which was launched in September with plans for US$13 billion of investment to create a tourism hotspot that will attract more than 10 million visitors by 2030. It will capitalize on the southwestern Aseer region’s mountainous landscape and nature. PIF is investing US$3 billion to build 2,700 hotel rooms, 1,300 residential units, and 30 commercial and entertainment attractions in Aseer by 2030. Not content with these two giga-projects, PIF is backing the Qiddiya Entertainment City Giga-Project with Phase One including more than 45 projects that include a Formula One-standard racing track, a 20,000-seat cliff-top stadium, an 18,000-seat indoor arena, an aquatic centre and a sports hub, as well as a 2,000-seat performing arts theater and a cinema.

On top of these developments is The Red Sea Project, which is envisaged as a luxury destination developed over 28,000sq km along Saudi Arabia’s west coast including more than 90 islands. The first phase, which includes 16 hotels in total, will be completed by 2023. By 2030, it is set to comprise 50 hotels, offering up to 8,000 hotel rooms and more than 1,000 residential properties across 22 islands and six inland sites.

While there are doubts that PIF will be able to pull off the raft of giga-projects and see them to completing, the US$10 billion King Abdullah Financial District is now nearing completion, intended as a “special investment zone” in Riyadh to attract foreign investors.

PIF is also anchoring Saudi Arabia’s housing revolution. In 2020, it launched a real estate company called “Roshn”, which will specialize in developing integrated urban neighborhoods. In 2018, Saudi Arabia announced plans to spend US$32 billion on subsidize home loans for borrowers to expand the private sector’s role in a mortgage market.

PIF established Saudi Real Estate Refinance Company (SRC) in 2018 to improve the performance of the kingdom’s real estate sector and reduce the government’s provision of home loans, which represented 65% of the total. Demand for property finance in the kingdom was expected to rise from US$74.7 billion in 2017 to US$133.3 billion in 2026. Last month, Minister of Housing Majid Al-Hogail remarked that by 2030 real estate finance is expected to exceed 1.2 million contracts with a value of SR600 billion (US$162 billion). This month, Fabrice Susini, chief executive officer of SRC, claimed that the company continues to expand its partnerships with originators to boost the rate of Saudi homeownership to 70% by 2030.

From giga-projects to housing to venture capital, PIF is pushing forward with its aim of supporting Vision 2030 objectives. If Saudi Arabia achieves its aim, it will be transformative to the national economy, but also provide a model of development for a world looking for sustainable solutions. If MBS fails in his ambition, the Kingdom will be forever wedded to the volatility of energy markets and a finite natural resource.