Saudi Arabia’s Public Investment Fund (PIF) has received a US$80 billion shot in the arm with the Kingdom’s government transferring a 4% in national oil company Aramco to the ownership of the sovereign wealth fund – less than two years after the completion of PIF’s sale of a 70% stake in Saudi chemicals major SABIC to Aramco for US$69 billion.

The move indicates that PIF and the National Development Fund (NDF) will be the drivers of Saudi Arabia’s Vision 2030, masterminded by Crown Prince Mohammed bin Salman, with Aramco and the central bank Saudi Arabia Monetary Authority (SAMA) acting as enablers.

PIF is aiming to reach total AUM of US$2 trillion by the end of the decade, up from US$560 billion today, after adding the equity stake in Aramco to the portfolio. To almost triple its size by 2030, PIF would require an increase in its portfolio size of US$15 billion per month – a staggering rate of growth that is only likely to be achieved through more asset transfers from the government.

MBS is keen to transfer capital to PIF from existing resources to support his vision for the fund, mindful that organic growth in asset value will not meet the ambitious AUM target. Last year, the Saudi government overhauled SAMA to divert hard currency surpluses in favor of PIF and the NDF. It is thought that the two state funds will receive the excess of reserves, after the amount needed to defend the riyal’s peg against the US dollar. SAMA’s investment portfolio has focused on low-risk assets, such as US bonds, but MBS wants to use the funds raised through oil wealth to bolster his vision of economic diversification as well as achieve a better yield from national savings. 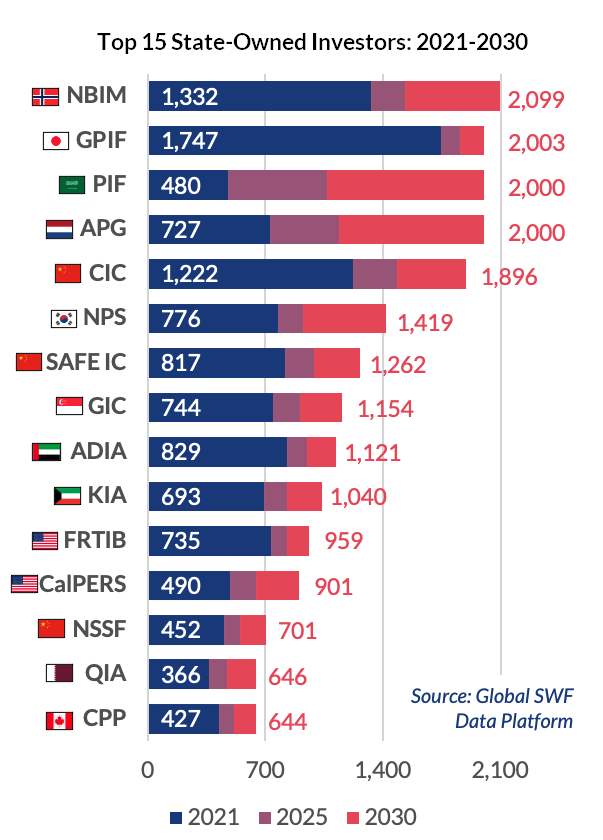 At the end of January, SAMA’s foreign currency reserves totalled SAR1.58 trillion (US$446.5 billion), while it is widely believed that the level of forex needed to defend the peg is around US$300 billion, therefore potentially providing PIF and the NDF with around US$147 billion of liquidity – most of which is likely to go into PIF’s coffers.

Additionally, there may be further transfers of Aramco’s equity to PIF. Such a move was taken by the Kuwaiti government last year when it “sold” the Kuwait Petroleum Corp, with a nominal value of US$8.3 billion, to the Kuwait Investment Authority (KIA) to help bridge its yawning budget deficit as it struggled to pay its bills. The assets were transferred to the Reserve Fund for Future Generations (RFFG), a long-term savings fund intended to sustain the country’s economy when oil reserves are depleted.

There is already a fuzzy line between Aramco and PIF. Yasir Othman Al-Rumayyan serves as both the oil company’s chairman of the board and the SWF’s CEO. While Aramco itself has a market capitalization of US$2 trillion, transfers would lead to a loss in the share of its dividend income to the government that may have to be offset by a broadening of the tax base and a rise in taxes.

The Kingdom raised taxes in recent years as it drives forward economic diversification to rid itself of oil dependence, with the tripling of VAT in 2020 helping to support rising non-oil revenue. Growth in crude output with the unwinding of OPEC production restrictions, alongside continued high energy prices, ensures that a decline in the share of Aramco’s dividends will not have an impact on the fiscal situation, which is expected to go into the black this year for the first time since 2013. As such, the government can afford to lose 4% equity to PIF – and perhaps even more could safely be transferred as fiscal revenue follows the economy’s trend towards diversification.

Yet, even with equity transfers of Aramco and a chunk of excess SAMA forex, the Saudi government will still need to be scraping together more assets together to pump up PIF’s value and grasp the US$2 trillion objective.