PIF Quiet in US Public Equity Trades, But Temasek Makes Pivot to Finance and Retail

The US public equities strategies of Public Investment Fund (PIF) and Temasek diverged in Q221, with the Saudi fund making only one change in its stockholdings while the Singaporean state-owned investor ramped up exposures to financial services and retail & consumer sectors.

PIF’s US public equity portfolio grew 3.2% over the previous quarter to a new high of US$15.95 billion, although on a year-on-year basis holdings were up 57.5%. The fund has retained its heavy exposure to retail & consumer stocks, but overall there is little change as it maintains its confidence that its allocations will benefit most from the post-pandemic recovery.

The Saudi fund’s exposure to retail and consumer stocks was 74%, down slightly from 75% in the previous quarter, despite buying 4.4 million more shares in video game-maker Activision Blizzard – the only change in position in the quarter. The increased position in Activision Blizzard coupled with modest gains in the values of other stocks in the sector were mostly offset by a fall in the value of Uber’s stock price, which lost PIF US$320 million in the value of equities; Uber remains the biggest holding in PIF’s US equities portfolio. At the same time, its holding in Multiplan – a tech company oriented towards the healthcare sector – grew by US$207 million. It has held its position in cruiseliner Carnival, at US$1.34 billion (-0.7%), despite the impact of the pandemic on the travel sector. It also held onto an ETF focusing on utilities, worth US$2.09 billion (-1.1%).

PIF’s holding pattern follows a period in which it increased its ownership in video game and entertainment stocks with a drive to gain exposure to a fast-growing e-games market, which has flourished amid lockdowns. 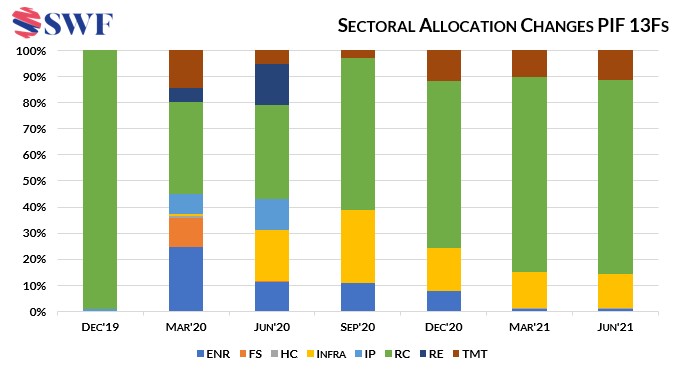 With total allocations to US public equities soaring 34.2% over the previous quarter to US$34.2 billion, Temasek was far more active than PIF. It made a significant pivot towards financial services (+48.5%) and retail & consumer (+91.3%) and away from TMT (+14.2%) and energy & natural resources (-40.1%) stocks. By end-June, its US portfolio was more than twice the level of the same point in 2020.

In terms of individual stocks, its holding in Blackrock grew by US$4.5 billion in value to US$9.0 billion. At the same time, it saw its shareholding in PayPal grew US$462 million, helping to further pump up the aggregate value of its finance sector stockholdings. New acquisitions included US$467 million in Didi Global and US$741 million in Airbnb, reflecting its faith in e-commerce platforms. Temasek also acquired a stake in software developer Intapp worth US$620 million.

There were, however, four significant reductions within the state-owned investor’s portfolio. It exited LNG producer Cheniere Energy (down from a holding worth US$273 million at end-Q121) and biotech company China Biologics (US$147 million at end-Q121), which went private, and massively reduced its holdings in ContextLogic (down US$398 million), the owner of e-commerce platform Wish which reported disappointing quarterly results. 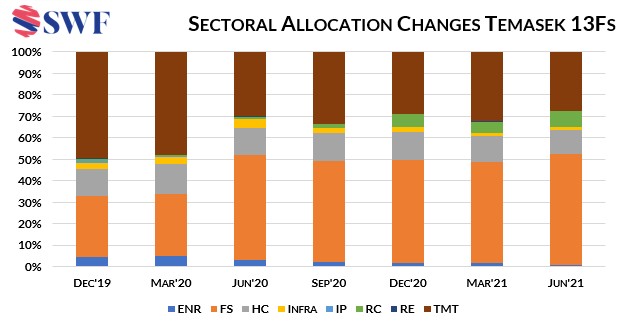