PIF Prepares for Surge into Chinese Stocks with QFII Application, but Risks are High

Saudi Arabia’s US$430 billion Public Investment Fund (PIF) is hoping to ramp up its exposure to Chinese public equity with reports in the Chinese press today that it has applied to become a Qualified Foreign Institutional Investors (QFII) – a status that enables direct access to trade “A-shares” of Chinese stocks, denominated in China’s renminbi/yuan (RMB), on Chinese stock exchanges.

Global SWF’s recent analysis of shareholdings reveals that in China, Norges Bank (NBIM) is the leading state-owned investor in A-Shares on behalf of Norway’s Government Pension Fund Global (GPFG), which are traded in mainland stock exchanges. At end-Q221, NBIM had invested around US$2.2 billion in A-shares, ahead of ADIA with US$1.6 billion and Singaporean funds GIC and Temasek which each held US$1.2 billion.

The SWF’s decision follows the announcement by the China Securities Regulatory Commission (CSRC) to enable QFIIs the opportunity to participate in financial derivatives trading, enabling licensed investors to back commodity futures, commodity options and, for hedging transactions, stock index options.

The broadening of the scope for investors has boosted the popularity of QFIIs, with Blackstone among the recent slew of applicants. QFII is also more popular than Shanghai-Hong Kong Stock Connect and Shenzhen-Hong Kong Stock Connect, which also enable foreign investment in A-shares but the exclude derivatives arrangements available for QFII.

PIF is rapidly evolving its public equities strategy, which has moved from long-term chunky holdings to behaving more like a retail investor and now taking a more sophisticated approach to boost long-term yield in the asset class.

Speaking to Global SWF at the beginning of the year, Yazeed Al-Humied, PIF’s Head of Local Holdings Investments, said: “Our U.S. equity acquisitions allowed us to selectively build positions in a range of high-quality companies and sectors that had the potential to help lead a global economic recovery.  During the past four years, we have increased our share of international investments from 3% to 20%; and have grown our staff from 40 to 1,000+, a phenomenal growth rate that we are very proud of.” 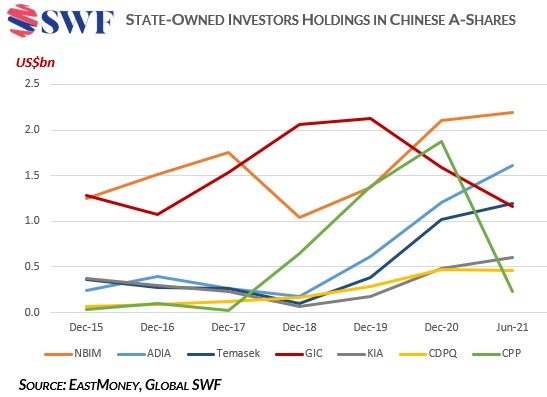 After a period of mixed messages over the fund’s strategy, clear trends emerged in H1 2021 that point to a strategy oriented towards stocks that are set to benefit most from the post-pandemic recovery as well as the disruption caused by the crisis, particularly in tech-oriented sectors.

At present, PIF has a high weight in US equities with holdings totallng US$15.95 billion at end-Q2 2021, up 57.5% y-o-y. In the first half of the year, the fund retained its heavy exposure to retail & consumer stocks (75% of its US equity holdings), confident that its allocations will benefit most from the post-pandemic recovery. It pivoted towards video game and entertainment stocks with a drive to gain exposure to a fast-growing e-games market, which has flourished amid lockdowns. Uber remains the biggest holding in PIF’s US equities portfolio, but it also has a significant position in cruiseliner Carnival, at US$1.34 billion at end-June, despite the impact of the pandemic on the travel sector, and has invested in an ETF focusing on utilities (US$2.09 billion).

Advancement in Chinese markets indicates a desire to diversify equity exposures, although until disclosures on its holdings are available it is unclear whether PIF will emulate its US equity strategy. If it wants exposure to Chinese Big Tech, the Saudi fund will be mindful of the move by the Chinese authorities to ban internet companies whose data poses potential security risks from listing in the US. Supervision of firms listed offshore is being boosted after a cybersecurity investigation into ride-hailing giant Didi Global in July.

The news of PIF’s application for QFII status comes exactly a year after Chinese regulators pulled the plug on fintech giant Ant Group’s planned US$37 billion dual listing in Hong Kong and Shanghai. The reason appeared to be founder Jack Ma’s brazen criticism of the Chinese government’s conservative approach to risk. The government’s subsequent regulatory crackdown on big tech wiped out over US$1 trillion from mainland Chinese stocks – a factor that PIF may be looking at to snap up under-priced tech stocks.

The crackdown is a reminder that China is not the US and inward investment matters less than maintaining a grip on the status quo. Investment must align with Beijing’s political priorities. Many within and without China sympathise with Beijing for taking action that they think is long overdue. Monopolies like Ma’s empire are seen as fettering innovation and the emergence of smaller companies, which should flourish because of regulatory enforcement.

Bloomberg’s Shuli Ren pointed out that “Beijing is concerned about four pillars of stability: banking, anti-trust regulation, data security and social equality. All of Beijing’s major interventions reflect these concerns… President Xi Jinping doesn’t care if stock investors, many of them foreigners, lose billions of dollars. He knows that China’s middle class will have his back. They like these regulatory crackdowns.”

China may also be setting a trend for global action against Big Tech as governments seek to regain control over data resources and information flow, which are seen as a significant threat to both political stability and personal privacy – as well as not paying their “fair share” of taxes. Moreover, there is an ongoing concern that Big Tech firms are smothering innovative startups. The narrative against Big Tech crosses political divides, from which consensus is emerging over reining in the power of these corporations.

If the trend is towards greater, harder and faster enforcement against Big Tech, China is hardly going to be a loser and could end up benefiting from being ahead of the regulatory curve – rewarded with continuing venture capital investment from state-owned investors and others.