Amaala, a renewables-powered Red Sea tourism project owned by PIF, is looking to raise up to SAR10 billion (US$2.67 billion) through a green bond issue next year. The financing will be used to build nine hotels on the northwest coast as part of the first phase, scheduled for completion in 2024.

The Red Sea Development Company (TRSDC) also secured earlier this year a US$3.8 billion green loan for new hotels powered by renewable energy. Amaala and TRSDC are set to be merged by the year-end to become the Red Sea Group, which could become a REIT listed on the Tadawul to raise further capital. The luxury tourism zone will include a new international airport and will target 1 million visitors per annum by 2030. 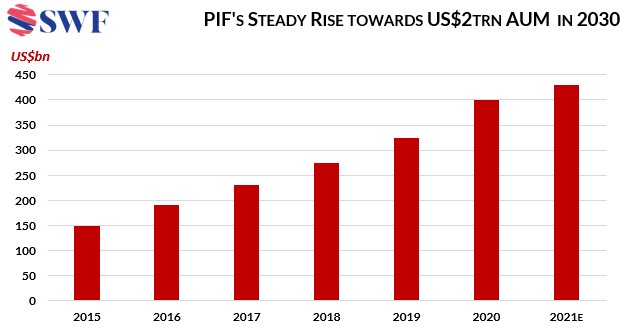 Other SWFs could become major participants in Amaala’s bond issue as they pursue the greening of their portfolios. In fixed income and treasury, supply of bonds is struggling to keep up with demand. According to the OECD, 16 sovereigns have now issued green bonds to finance green projects in governments’ budgets, exceeding US$80 billion, but sovereign green bonds account for only 0.1% of all government debt securities. As such, investors are looking to corporate bonds, such as those planned by Amaala.

The Kingdom is committed to the Paris Climate Agreement and despite being the world’s biggest oil producer it is a member of the Net Zero Producers Forum. PIF is also the cornerstone investor in NEOM, a futuristic US$500 billion development in Saudi Arabia whose flagship project is a zero-carbon city. In the energy sector, the fund has a 50% stake in renewable energy generator ACWA which is planning an IPO, which is projected to earn up to US$1.2 billion from the floating of a 11.1% stake on the Tadawul.

Despite all these grand plans, the country has received a “critically insufficient” rating from the Climate Action Tracker, indicating that the government’s policies and action in 2030 “reflect minimal to no action and are not at all consistent with the Paris Agreement’s 1.5°C temperature limit. If all countries were to follow Saudi Arabia’s approach, warming would exceed 4°C.”

Although it has failed to firm up any targets, Saudi Arabia appears keen to show it is addressing its shortcomings. Next month, it will launch its flagship Future Investment Initiative (FII) with an ESG theme, indicating that the Kingdom is now taking sustainability seriously. PIF is a crucial element in ensuring that Saudi Arabia’s Vision 2030 economic diversification push is sensitive to climate change.

The US$430 billion fund is a member of the One Planet SWF Framework and has recently begun working with BlackRock on developing its environmental, social and governance principles. This year, it appointed HSBC and JPMorgan as joint structuring agents for its sustainability financing framework. It also hired five international banks as members of an ESG panel for its medium-term capital-raising strategy, according to Reuters.