The Ontario Teachers’ Pension Plan Board (OTPP) has joined its fellow Canadian public pension funds CPP Investments and CDPQ with a new office in India, as it ramps up its exposure to the South Asian heavyweight in emerging markets.

OTPP has chosen India’s financial capital Mumbai as its base of operations to improve its origination of deals and establish local partnerships. The Mumbai office in the Bandra Kurla Complex will be its sixth outside Canada, after New York, San Francisco, London, New York, and Singapore.

Deepak Dara will take up the role of Senior Managing Director and Head of India in early 2023, when he will be responsible for accelerating investment activities and enhancing portfolio management in India. He joined OTPP in 2020 as Chief of Staff to the Chief Investment Officer. Dara will oversee a team initially of approximately 10 team members in Mumbai, comprising a mix of local talent and transfers from its other offices.

Infrastructure has been the main target for sovereign investors seeking opportunities in India. Currently, OTPP is India’s eighth biggest sovereign investor in India’s infrastructure sector, representing 5% of the US$19.4 billion deployed from 2016 to date. GIC is the leading state investor, contributing 23% of the capital in 2016-2022, followed by CPP Investments (15%), CDPQ (10%), ADIA (8%), Dubai World (8%), PSP (6%), and Temasek (5%). By origin, Canada is by far the biggest investor in the asset class, with its pension funds representing a combined 45% of total sovereign capital. 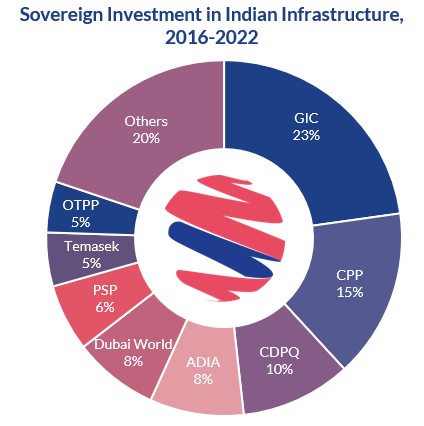 This year, OTPP ramped up its activity in India with four significant investments in private markets. This month, it signed a binding agreement to acquire a 30% stake in the Indian renewable energy company Mahindra Susten for US$300 million. The transaction envisages establishing an Infrastructure Investment Trust (InvIT) to comprise renewable power assets seeded by Mahindra Susten with operational capacity of around 1.54GW. Over the next seven years, OTPP is set to deploy up to US$450 million into the business and the InvIT.

Roads have been a major focus of OTPP’s activities. In April, it signed an agreement with KKR to invest US$175 million in KKR’s road platform in India, which includes a mixture of 12 toll and annuity roads, including Highway Concessions One. The platform possesses significant potential to scale, with plans in place to acquire more assets in the future.

The transactions signed this year in Indian infrastructure followed the acquisition of a 25% stake in the National Highways Infra Trust in November 2021 for US$180 million OTPP is also an anchor investor in the US$4.3 billion National Investment and Infrastructure Fund (NIIF).

Other investments include a US$350 million investment in Edelweiss Alternate Asset Advisors, a majority stake in Sahyadri Hospital Group, and this month an investment in a late-stage venture capital round for VerSe Innovations.

The Mumbai office will expand OTPP’s Indian investments across all asset classes, including public and private equities, infrastructure, real estate, credit and venture and growth equity.

India is particularly attractive due to its large population and growth potential. India is set to be the main driver of road infrastructure investment in Asia over the medium-term, with the country home to both the highest number of projects in the region with 633 projects.

A US$270 billion plus pipeline of projects reflects the government’s aim to modernise Indian highways and upgrade the quality of roads as part of the country’s National Infrastructure Pipeline (NIP). The NIP aims to support growth of India’s infrastructure sector with total investment of US$1.4 trillion and is bolstered by liberalization of FDI regulations and highway privatization.

“India is an attractive investment destination and will be one of our growth markets over the next 5-10 years.  It has a large, growing, and dynamic economy, with openness to foreign capital which makes it a strategically important market for us,” said Jo Taylor, OTPP's President and Chief Executive Officer.