After his first year at the helm, Ontario Teachers Pension Plan CEO Jo Taylor must be heaving a sigh of relief. Rising above the impact of the pandemic, the C$221.2 billion (US$173 billion) public pension fund posted an 8.6% annual return in 2020 with the performance of its equity investments more than offsetting disappointing results in real estate. Global SWF has identified key areas of growth OTPP is exploring to maintain its strong momentum: venture capital in disruptive tech and diversification in Asian markets led by its growing team in Singapore.

While the fund tracked below its benchmark of 10.7%, Global SWF data show that OTPP is the joint second best performer of Canada’s top seven public pension funds alongside CDPQ, with a compound annual growth rate of 8.0% over the past six years. This strong growth rate puts it behind CPP Investments on 9.4% but well ahead of Ontario stablemate OMERS on 6.5%. OTPP's net assets grew C$13.8 billion over 2019 and the fund earned C$18.0 billion in investment income in 2020.

Exiting Sovereign Debt at the Right Time, but Covid Weighs on RE

In fixed income, OTPP responded to negative yield sovereign debt exposure by cutting its bond holdings in developed markets, having taken advantage of a rally in the first half of the year. As a result, fixed income assets totaled C$34.6 billion at the end of 2020, compared to C$93.1 billion at end-2019. By diversifying its bond portfolio and securing strong returns in H1, OTPP chalked up a return of 20.7% in FIT, slightly exceeding the benchmark return. OTPP is distributing the C$10 billion earned from bond sales in 2020 across asset classes, including increasing private credit and broadening activity in private equity.

Areas of weakness included real estate, which saw a negative yield of -13.7% against a -4.7% benchmark. The asset class saw a four-year average return of just 0.9%, well below the 4.3% benchmark. While property prices weakened in the face of the pandemic, the large Canadian shopping mall portfolio was vulnerable to the impact of the crisis. Operating income for real estate was down 30% due to a rise in vacancies and rent abatements. Yet, this segment is expected to snap back with robust growth once retail resumes activity as lockdown measures are eased. On the upside, OTPP beat benchmarks in both public and private equity, which together represented 38% of AUM and delivered a combined one-year return of 13.2%. 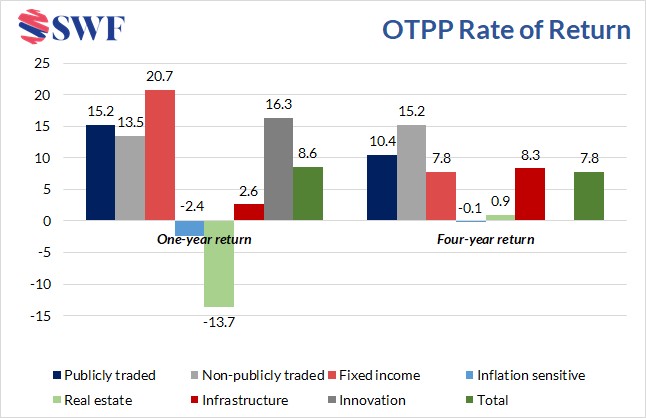 The segment that outshone the rest in terms of returns was the Teachers Innovation Platform (TIP) venture capital portfolio, which launched in April 2019. Although at C$3.2 billion it represented just 2% of AUM, innovation assets posted a 16.3% return. The creation of the platform corresponded with a cut in OTPP’s allocation to hedge funds from 8% to 6% of AUM, indicating that the TIP is set to drive VC growth within the portfolio.

The first TIP investment was Elon Musk’s SpaceX, which this month saw its test rocket suffer another catastrophic malfunction – an illustration of the inherent risks of disruptive innovation, as well as the potential significant rewards. OTPP is undeterred by the technical teething problems in rocketry with its mind set on the growth potential of SpaceX's Starlink satellite internet constellation.

Other TIP targets focus on artificial intelligence applications in autonomous vehicles, energy storage and finance, data management, semiconductors and online tutoring – areas of market disruption that have been boosted by the pandemic.

Tech VC is not the only area where OTPP is advancing its interests. Asian infrastructure is also getting increasing attention. Global SWF notes that OTPP has been steadily building up its Singapore office, with most of the staff focusing on infrastructure and natural resources. We expect the office to be central to the fund’s push into these sectors in Asia.

OTPP joined Abu Dhabi’s ADIA in November to back Equis Development’s plans to develop US$1.2 billion of energy and waste infrastructure projects in the region. It has also committed US$250 million to India’s NIIF Master Fund with co-investment rights of up to US$750 million, signalling a potential advancement into the country’s growing road and utility infrastructure. In the region’s developed markets, OTPP has deployed around US$900 million in Australian agriculture. 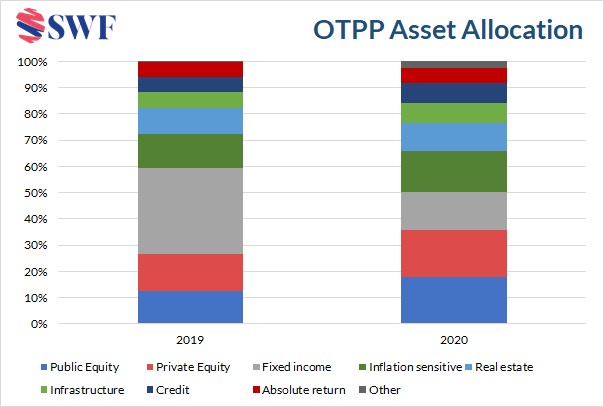