One of Canada’s biggest public pension funds is following a trend seen throughout the sovereign investor universe towards creating venture capital platforms in the bid to boost long-term returns.

This week, the US$190 billion Ontario Teachers’ Pension Plan Board (OTTP) renamed the Teachers’ Innovation Platform to the Teachers’ Venture Growth (TVG) and is set to increase the size of its portfolio from 3% of net assets to 7-10% over the next five to 10 years. It had previously indicated it was planning to ramp up its bets on start-ups by at least US$12 billion by 2026.

The three-year old platform has focused on late-stage venture and growth equity investments in the tech sector and now comprises 20 direct investments and an array of partnerships, totalling C$7.1 billion (US$5.6 billion). It is making 12 new hires over the next year to support the expansion of the portfolio.

VC helped support OTPP’s 2021 return of 11.1%, which was 2.3 percentage points above its benchmark and brought its six-year average annual return to 7.7%. OTPP’s alternatives allocation is the highest rate of all Canadian PPFs, alongside its provincial stablemate OMERS, at 52% of AUM.

The development of the platform mirrors that of similar venture capital subsidiaries of state-owned investors, which began with Temasek’s Vertex Ventures and has focused heavily on early-stage start-ups with a strong appetite for healthcare, tech, and e-commerce.  The Singaporean holding company demonstrated the potential gains from VC earlier this month when it reported a US$530.8 million net profit for 2021, up from a US$40.4 million net loss in 2020, with the net asset value rising from US$181 million to US$1.6 billion. 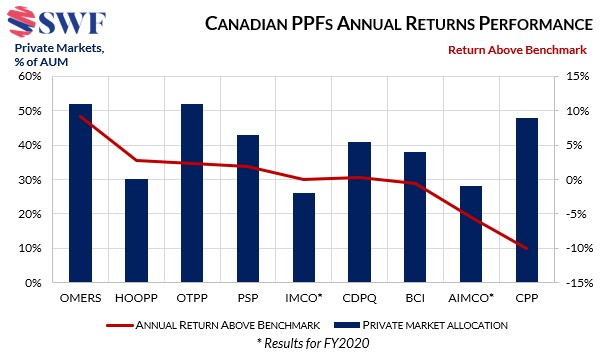 Vertex set a trend among state-owned investors (SOIs), vehicles such as OMERS Ventures, Mubadala Capital Ventures and ADQ’s DisruptAD  - and now OTPP’s TVG. The Ontario fund is also following VC-focused sovereign funds with TVG’s plans for a San Francisco office to tap Silicon Valley’s enduring success in the tech sector; it already has offices in Toronto, London and Hong Kong.

TVG would become the ninth SOI to establish an office in the city, following GIC (1986), QIC (2012), Khazanah (2013), Temasek (2017), Mubadala (2017), OMERS (2019) and CPP (2019). In 2021, the Korean Investment Corporation (KIC) became the latest in the clutch of SOIs, as part of its effort to raise its allocation to alternatives from 15.3% at end-2020 to 20%. Signalling it wished to be more hands-on with direct investments, KIC recently introduced a fast-track system in which its chief investment officers can invest up to US$20 million in startups without the CEO’s prior approval.

KIC’s decision to give its investor teams a freer hand in deal-making illustrates one of the main motivations behind OTPP’s decision to remodel its venture capital arm with a more defined purpose and goal. Such subsidiaries enable VC teams to circumvent investment committee, creating more nimble and flexible units that can make rapid decisions without having to wait for approval by an HQ in a different time zone. TVG’s move should allow the new office to make more rapid decisions on participating in earlier stage funding rounds, enabling it to become embedded in the tech investment ecosystem.