On 1MDB, Goldman and how SWFs can go all wrong

This week in the federal courts of Brooklyn, former Goldman Sachs banker Roger Ng is facing as many as 30 years in prison for allegedly helping 1MDB to embezzle billions of Malaysian public funds. Tim Leissner, his former boss at the bank, testified yesterday to confirm that “greed and ambition” drove their involvement in the bribery and money laundering scheme. Goldman has already paid US$ 2.8 billion in fines.

Back in KL, former PM Najib Razak is appealing his conviction and 12-year prison sentence, his wife Rosmah and her son Riza continue to be investigated, and mastermind and fugitive Jho Low is still at large. The scandal has had serious ramifications for Malaysia Inc. and all its “Government-Linked Investment Companies”, namely Khazanah, KWAN and KWAP (“SWFs”) and KWSP, PNB, LTH and LTAT (“IIs”).

The Malaysian fund sent shockwaves in Abu Dhabi Inc., too. Former SWF IPIC allegedly acted as a co-guarantor of two 1MDB bonds for US$ 3.5 billion, in exchange for a payment to its subsidiary Aabar. Today, IPIC has been absorbed by Mubadala, and Aabar no longer exists. IPIC former CEO, Khadem Al Qubaisi, was sentenced to 15 years in prison and alleges he has been used as a scapegoat for his boss/es.

The case has undoubtedly and sadly contributed to increase the awareness about SWFs around the world. But is 1MDB the largest scandal in SWF history? Far from it. The list of misused and/or exhausted funds is long, and the Malaysian fund is only the 12th largest pool of capital that has disappeared in thin air. Number 1, Venezuela’s FONDEN, allegedly managed US$ 145 billion at some point that can no longer be found.

Other known cases include Russia’s RF, Ireland’s NPRF, Iran’s OSF and Brazil’s FSB. The UAE itself has had other cases of investment vehicles that did not end up working and were absorbed by their mother entities: Istithmar World by Dubai World, and Dubai International Capital by Dubai Holding. In total, Global SWF estimates that the 17 SWFs now defunct managed at their peak a combined US$ 459 billion.

There is a glimpse of hope, though. In the past few months, we have seen how certain stabilization funds that were defunct have received new injections from the government thanks to the rise in oil prices. Algeria’s FRR, which managed US$ 73 billion at some point, just received fresh capital five years after being depleted and some Latin American SWFs are also expecting inflows. But more on that in our next newsletter. 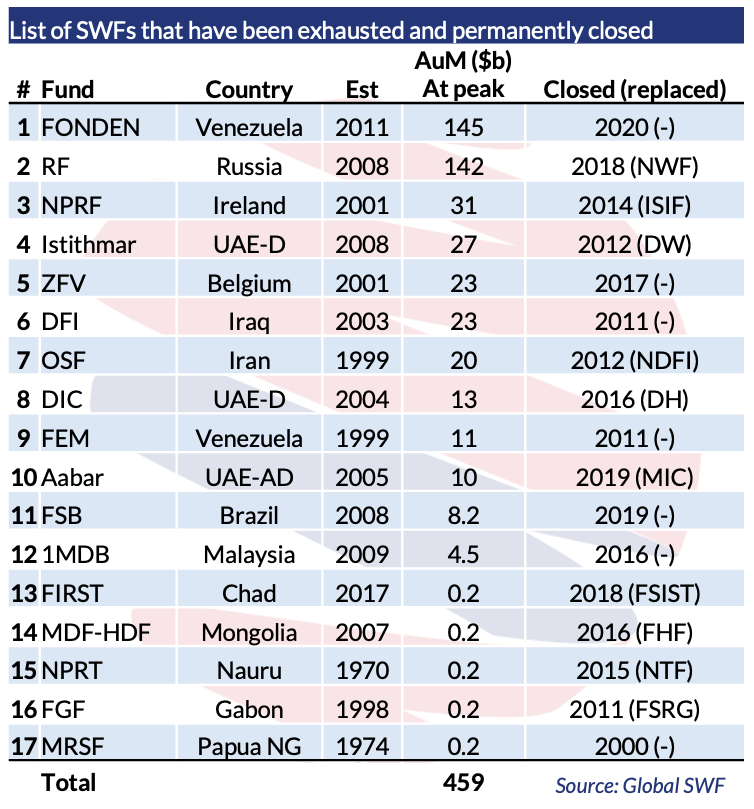