The infrastructure arm of Ontario’s public employees pension fund OMERS has taken a chunk of Indian renewables producer Azure Power, which is majority owned by Québec’s CDPQ. Yet, Global SWF research finds that state-owned investors are increasingly reticent about risks in the Indian renewables market, while at the same time they are being lured to developed markets where opportunities are opening up in energy transition.

OMERS Infrastructure bought a 19.4% stake in the producer, which has about 2GW of operational capacity and around 5GW under development. The transaction, worth US$219 million, is its first foray into Indian renewables infrastructure. CDPQ had increased its stake to 50.9% last year to support growth in solar energy; the OMERS transaction values the Québecois fund’s stake at US$575 million.

OMERS’s investment in Azure comes hot on the years of the producer securing US$163 million in debt financing, in a syndicated deal led by Mitsubishi UFJ Financial Group, for a 300MW solar facility in Rajasthan state.

OMERS’s other renewable assets include Dallas-headquartered Leeward Renewable Energy, a growth-oriented renewable energy company that owns and operates a portfolio of 22 renewable energy facilities across nine US states with 2GW of capacity.

Aside from CDPQ, CPP Investments is also an active Canadian investor in Indian renewables, having bought a 6% stake in ReNew Power for US$491 million in 2018. Abu Dhabi Investment Authority (ADIA) previously invested US$200 million in the company back in 2015. ADIA went on to co-invest in Greenko Energy – one of India’s biggest solar and wind energy companies with 6GW capacity – with Singapore’s GIC in June 2016. ADIA took a 15% stake for US$600 million and GIC invested US$1.52 billion for a majority 60% stake. 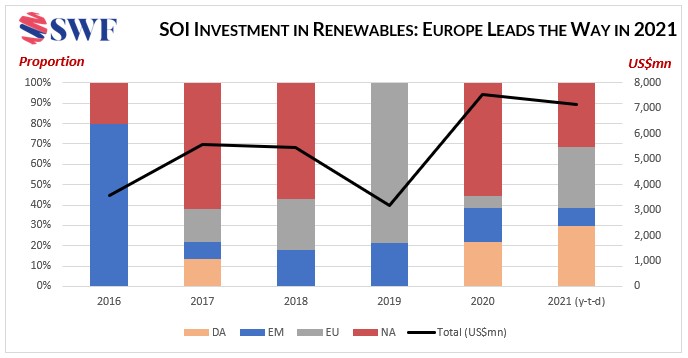 India has high ambitions for its non-hydro renewables sector (mainly solar and wind), which is set to contribute at least a sixth of the country’s total electricity generation capacity by the end of the decade. Strong growth is bolstered by government support, which has backed a robust project pipeline.

India ratified the Paris Agreement in October 2016 and pledged to reduce the country's emissions intensity of its GDP by 33-35% by 2030 from the 2005 level. It has targeted 40% non-fossil fuel-based energy resources in its total generation capacity.

Yet, the Modi administration appears reluctant to set a standalone emissions reduction goal, mindful of the opportunity cost of relinquishing cheap coal power generation and its contribution to economic growth.

Progress is currently lagging government targets due to bottlenecks in the electricity grid and a lack of power purchase agreements. On top of these challenges is the government’s efforts to boost local manufacturing of solar power equipment through the imposition of customs tariffs, which risks dampening investor interest due to possible higher costs. Covid-19 has merely added to the problems facing the sector, with disruption to supply chains and travel as well as slower consumption growth.

Global SWF previously highlighted the problem of outstanding payments to solar power generation companies by cash-strapped distribution companies in India, which is eroding foreign investor confidence in the sector and could potentially hit the earnings of foreign state-owned investors.

The challenges were highlighted by CPP Investments’ recent caution over risk in the sector, which prompted it to pull out of a deal with SoftBank for an 80% stake in SB Energy,  which has a 7.7GW renewables generating capacity, for US$525 million. CPP had sought condition precedents that included meeting project commissioning deadlines, securing new businesses, bond issuance, and SoftBank bearing any future liquidated damages liability for acquiring this stake. The conditions appeared to be linked to the difficulties faced by investors in the sector.

Indeed, while billions continue to be poured into Indian renewables, state-owned investors are looking for safer infra bets elsewhere, particularly in developed markets.  While there is no short supply of capital for renewables infrastructure, there is competition for investment amid the energy transition – and India is falling behind insofar as state-owned investors are concerned.

Global SWF data indicate that Developed Asia, Europe and North America have each taken around 30% of SOI direct investment in renewables, with emerging markets taking less than 10% (down from around 16% in 2020). Meanwhile, investment levels are soaring with year-to-date SOI renewables private equity totaling more than US$7.1 billion - just behind the US$7.6 billion invested in the whole of last year, which marked a new hide tide point for SOI capital in the segment. The situation is far from the 2016 peak of SOI investment in EM renewables, which represented 80% of the global total with India taking the lion's share.

A slew of executive orders passed by Joe Biden in the wake of his inauguration will shift the investment climate for state-owned investors with a greater emphasis on sustainability. The decision to rejoin the Paris Climate Accord signaled the direction of travel on energy, away from conventional fossil fuels favored by the Trump administration to renewables.

Global SWF data show that in the five years since the adoption of the Paris Agreement in December 2015, SOIs invested more than US$7 billion in renewable energy in the US, despite the Trump administration’s official notice in August 2017 to quit. This compares with US$6.6 billion invested in upstream and midstream oil and gas sectors over the same period. The balance is now likely to tip strongly in favor of renewables with SOI capital flowing faster and faster into the sector.

Demonstrating the lure of US renewables , last month Australian SOIs Australian Super and QIC joined Swedish public pension fund AP2 in backing a US$2 billion investment in Generate Capital which focuses on sustainable infrastructure, including solar farms, waste-recycling systems and hydrogen-fuel plants. It will use the money to expand beyond North America into Europe, and sectors like water and agriculture.

Europe is currently attracting the most attention with US$2.2 billion of SOI private equity investment so far this year, nearly beating the region's full-year peak of US$2.5 billion in 2019. Norway’s NBIM is set for a massive investment in the sector, pledging 1% of the fund’s assets in renewables by end-2022. NBIM has already begun the mammoth investment task with its acquisition earlier this year of a 50% stake in the 752MW Borssele 1 and 2 wind farm off the Netherlands for US$1.63 billion, comprising the majority of SOI investment in European renewables in the year-to-date.

Global SWF has pointed out that reallocating even small percentages of a fund as huge as GPFG carries significant challenges. NBIM has also restricted its renewables investments to developed markets, similar to its risk averse approach to real estate; NBIM has failed to meet its initial target of 7% in unlisted properties with a policy of investing in prime locations.