The past few years have not been easy for the finances of Oman Inc. The Sultanate has one of the smallest shares of crude oil reserves in the GCC and the second highest fiscal breakeven point, after Bahrain. For the period 2015-2021, Omanis needed the oil price to be above US$ 87/barrel to make money – which never happened, until January 2022.

Luckily, in the first four months of 2022, the barrel of Brent has sold on average for US$ 99, while Oman’s fiscal breakeven point is expected to decrease to US$ 61, according to IMF data. If things continue this way, the Oman Investment Authority (OIA) could receive an important capital inflow by year-end. Global SWF estimates that OIA now manages US$ 29.4 billion, after a government withdrawal of US$ 2.6 billion in 2021.

The SWF is part of a broader strategy “Oman Vision 2040” and is currently formulating a new business plan for the cycle 2022-2026. One of the key goals during that period will be privatizing and/or floating 30 of the 160 government companies it currently holds. This is in line with OIA’s efforts to attract expertise, technology, and foreign investment to the country’s strategic sectors. A good example was the sale of 49% of Oman Electricity Holding Company (Nama) to China State Grid in December 2019 for US$ 1 billion.

Since its establishment in 2020 as the merger of the State General Reserve Fund (SGRF), the Oman Investment Fund (OIF), Oman Qaboos (OQ) and other government holdings, the OIA has not published any annual report or indication of their key figures and portfolio, except for a bond prospectus in October 2020 – which was another important strategy to raise funds at a critical time.

OIA’s portfolio is split in two: the National Development bucket, which includes the 160 government entities and represents more than two thirds of the total value according to Global SWF’s estimates, and the international bucket, which is invested in public markets (69%) and private markets (31%) overseas.

Some of the international efforts have been pursued via JVs with other governments and SWFs, including Pakistan, Qatar (QIA), Vietnam (SCIC), Brunei (BIA), Uzbekistan (UFRD), India, China, and Spain (COFIDES). The latter has been especially active lately, with six investments in Spanish SMEs since July 2019.

For the privatization strategy to be successful, the OIA must ensure that these agreements are bilateral, and that know-how and the capital are indeed brought back to the sultanate. Others have tried and succeeded. 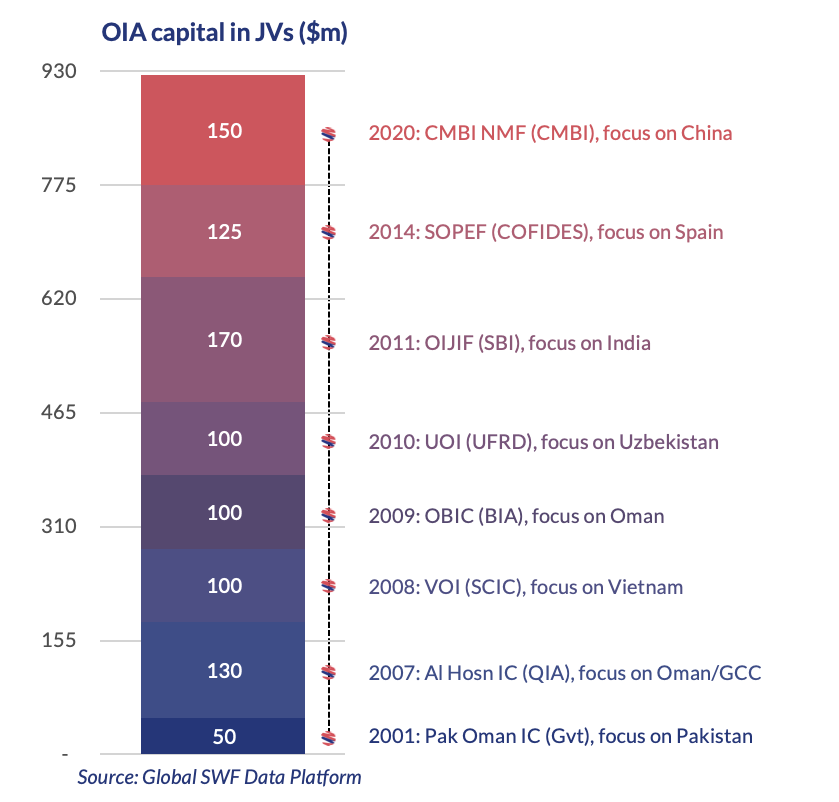