New Zealand’s sovereign wealth fund, NZ Super, witnessed a -10.7% return in the first half of 2022, according to Global SWF calculations, as the decline in equities wiped NZ$5.6 billion (US$3.4 billion) off its portfolio value.

The fund stood at NZ$55.7 billion (US$34.2 billion) at the end of June, which marked the end of its financial year, down from NZ$57.6 billion at end-FY2022 and NZ$61.3 billion at the end of the 2021 calendar year. Its return for January-June was 1.4 percentage points below the average of 9.3% for state-owned investors globally, largely due to a high proportion of public equities in the portfolio with alternatives – which have helped cushion the blow on public markets in other funds – at around 20%. In the two months since the end of FY2022, the size of the Fund recovered by approximately NZ$2 billion to NZ$57.3 billion.

The situation was a vast turnaround from FY2021 when NZ Super notched up its best-ever return of 29.6% due to a leap in the value of public equities, beating its benchmark by 1.7% and surpassing the performance of Australia’s public pension fund AustralianSuper (20.4% on the balanced fund) and its sovereign wealth fund the Future Fund (22.2%).

CEO Matt Whineray still hailed the results as a success for its active investment strategies, which ensured the outcome – an annual return of around -7.0% at end-June – was far stronger than its passively invested Reference Portfolio (80% equities, 20% fixed income) which returned -14.2%. NZ Super said that the outperformance ensured a record NZ$4.5 billion in value added.

Sovereign funds tend to judge their performance over long-term results and in this regard, NZ Super still remains impressive with net returns averaging 10.1% per annum over the past 10 years, exceeding the reference portfolio by 2.7 percentage points.

“The periods of extraordinarily high returns, like 2020-2021 when the Fund returned 29 percent, are behind us. In effect we were bringing forward future returns in an environment which combined both monetary and fiscal stimulus.” 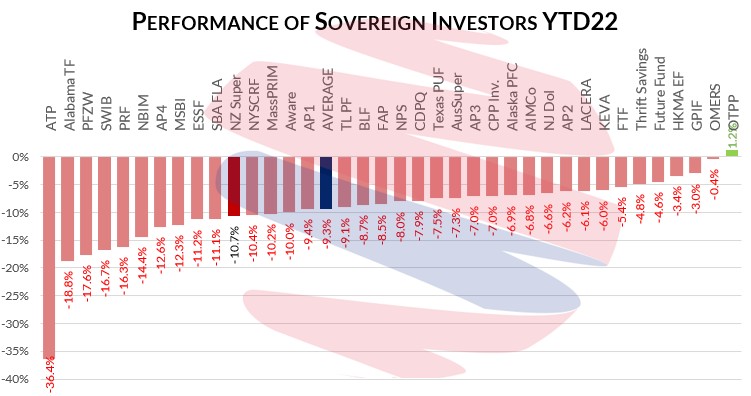 Under Whineray’s leadership, NZ Super has become a leader in ESG and is joint leader of Global SWF’s 2022 Governance, Sustainability and Resilience (GSR) scoreboard, alongside Canadian public pension funds CPP, CDPQ and BCI, European funds PGGM and ISIF, and Asia-Pacific sovereign investors Temasek and Future Fund. NZ Super’s ability to generate strong alpha demonstrates that ESG is not an obstacle to superior returns.

Although relatively remote, Aotearoa New Zealand is gaining global attention for its renewables potential with NZ Super and Copenhagen Infrastructure Partners (CIP) agreeing in March to explore large-scale offshore wind energy generation in the South Taranaki Bight. If the deal is given approval, New Zealand would see over 11% of its electricity demand powered by the 1GW development, which could be expanded to 2GW in the future.

Matt Whineray has emphasised the role of his fund in sustainable energy production, saying, “The climate crisis is driving a global shift in how countries produce energy. We are focused on opportunities that allow us to apply our long-term investment capital to support this shift and the Fund’s own public commitment to being net zero by 2050.  While this proposal is still at a very early, exploratory stage, we are confident it could help New Zealand’s transition away from fossil fuels and towards home-grown clean energy.”