If the deal is given approval, New Zealand would see over 11% of its electricity demand powered by the 1GW development, which could be expanded to 2GW in the future.

NZ Super CEO Matt Whineray emphasised the role of his fund in sustainable energy production: “The climate crisis is driving a global shift in how countries produce energy. We are focused on opportunities that allow us to apply our long-term investment capital to support this shift and the Fund’s own public commitment to being net zero by 2050.  While this proposal is still at a very early, exploratory stage, we are confident it could help New Zealand’s transition away from fossil fuels and towards home-grown clean energy.” 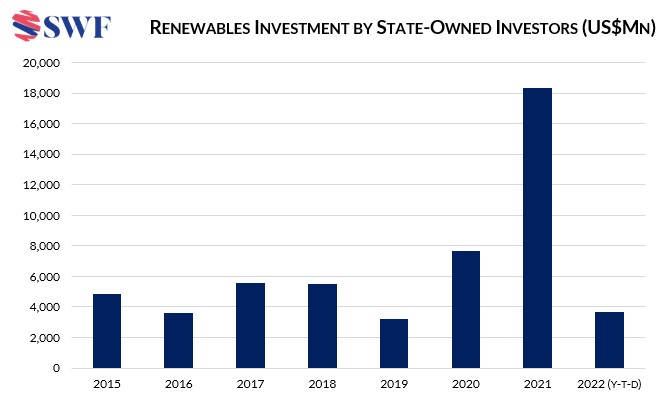 The deal shines a light on Aotearoa New Zealand’s significant potential in the drive towards net zero as well as NZ Super’s role in national infrastructure development.

One of the stand-out features of NZ Super’s strategy is the decarbonization of its reference portfolio, which has helped support its strong return, adding an additional 0.6% per annum in return since 2016. In Global SWF’s Governance, Sustainability and Resilience scoreboard, the fund has one of the highest scores; in the 2021 review, it was joint second with Norway’s NBIM at 96%, behind Australia’s Future Fund which got top marks at 100%.

Speaking to Global SWF last year, NZ Super’s CIO Stephen Gilmore explained, “We thought that our then carbon exposure meant that we were taking undue risk that was not being rewarded, so we reduced our exposure, and this happened to increase our returns. We are perceived as leaders in responsible investing, but the bar keeps rising so we’ve embarked on an effort to maintain our social license / best practice.”

Global SWF data shows that investment in renewables by state-owned investors reached a record high of US$18.3 billion and there’s every chance 2022 will see investments reach the same level in the drive towards net zero.