With public markets peaking, Norway’s US$1.4 trillion Government Pension Fund Global (GPFG) returned a meagre 0.1% in Q321 – an increase of NOK31 billion (US$3.7 billion) over the previous quarter – but was still able to beat its benchmark index by 0.25 percentage points.

The depreciation of the krone provided a NOK22 billion boost, which partly offset the impact of a NOK52 billion withdrawal. Meanwhile, the return on unlisted real estate was 3.6% and infrastructure – a sector in which NBIM has only just started investing – saw a -0.2% return. Fixed income nudged up 0.1%.

The flat performance in public equities led to a decline in allocation to the asset class from 72.4% at end-June to 71.5% at end-September, while the allocation to fixed income rose from 25.1% to 25.9%, unlisted property grew from 2.4% to 2.5% and unlisted infrastructure remained at 0.1%.

Today, GPFG’s manager Norges Bank (NBIM) suggests the value of the fund has fallen NOK165 billion (US$20 billion) in the three weeks since end-September, reflecting an appreciation of the krone that outweighed stock value gains over the past three weeks.

The fund’s performance reflects the overwhelming size of public equities in the portfolio and the impact exchange rate movements have on its market value. NBIM has lacked agility due to its conservative approach to portfolio allocations, with a highly limited exposure to private markets. Its effort to target real estate in developed markets has failed to meet expectations. The initial target of 7% with a policy of investing in prime locations; the target was revised down to 5% but the current level is still 2.5%.

NBIM’s approach to renewables is similar to its cautious approach to real estate, which has focused on prime markets in developed economies. As a result of this self-imposed restriction, it has failed to meet its initial target of 7% in unlisted properties. 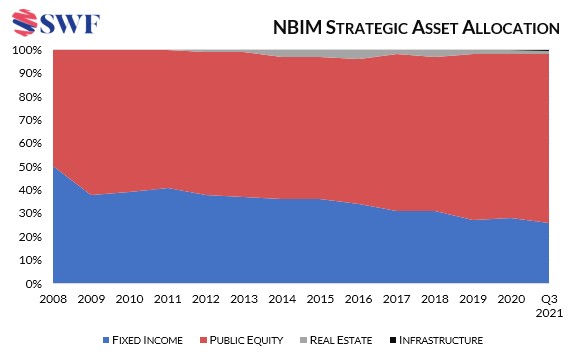 Although it has pledged to invest 1% of AUM in renewables by end-2022 (potentially equating to US$140 billion), so far it has pursued acquisitions of existing assets in developed markets rather than funnel liquidity into new projects to expand green energy capacity – notably its acquisition of a 50% stake in the Borssele 1 and 2 wind farm off the Netherlands for US$1.63 billion in April. Last month, the European Investment Bank (EIB) signed a EUR500 million loan with Ørsted – NBIM’s partner in the project – to support its increased capex programme including the completion of the wind farm. While the project is achieving progress, NBIM would have to invest nearly 10 times this amount to reach its target, indicating that it will fail to meet its ambition.

Under fire for failing to set net zero targets and join the Net Zero Asset Owners Alliance, in August NBIM’s produced a report entitled “Climate Change as a Financial Risk to the Fund” indicates that exclusions remain a central part of its efforts to reduce climate risks. Yet, the nature of its governance framework and restricted mandate means that impact investment has been out of reach. Aside from the problems in quantifying carbon intensity and ascertaining how to adapt the portfolio to various scenarios, the fund manager is missing out on opportunities provided by impact investment.

On the upside, GPFG will be less affected by withdrawals that during the pandemic. This month, Norway’s outgoing center-right government reduced withdrawals by more than 20% to NOK322.4 billion (US$37.7 billion) in 2022 – but it would still represent the third largest annual withdrawal in the fund’s 31 year history.

The cut comes amid a rebound in the Norwegian economy as the pandemic subsides and oil prices recover, helping to support government revenues. The non-oil deficit was set at 2.6% of the fund’s value at end-2021, which is below the 3.0% cap and down from the 3.6% level set in 2021.

The incoming center-left coalition of the Labor Party and the Center Party will still inherit an expansionary budget at a time when GDP growth is expected to reach just under 4% in 2021 and 2022, up from a 2.5% contraction in 2020.